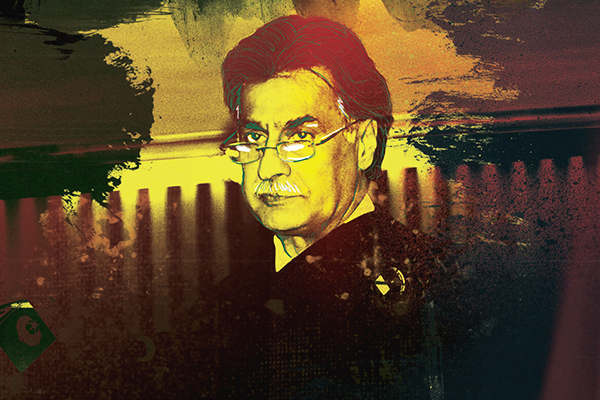 In conversation with Sardar Ayaz Sadiq.

On Aug. 22, an election tribunal invalidated the 2013 contest in Lahore’s NA-122 constituency, which had seen Sardar Ayaz Sadiq of the Pakistan Muslim League (Nawaz) triumph over Imran Khan of the Pakistan Tehreek-e-Insaf, and ordered a fresh election. The tribunal claimed the earlier contest was rife with irregularities but did not accuse the winner, Sadiq, of any wrongdoing. The by-election is scheduled for Oct. 11 and will see Sadiq run against Khan’s stand-in, Aleem Khan. We recently spoke with the suave and affable, currently-former speaker of the National Assembly about the race and more. Excerpts:

Is the wealth of your opponent a factor in this race?
I’m fortunate that PMLN’s longstanding supporters—from shopkeepers to small-business owners—have been adept at fundraising during the last two elections and now this one. I have a limited income and resources and I’m not a very rich man, but I like to think I’ve been able to make a difference. My family set up the Sardar Islamia Girls’ High School prior to Partition. This was the first school for Muslim girls in the city. Since 1994, we have a charitable eye hospital that has done over 1,000 surgeries annually, 60 percent of them for free and the rest on subsidized rates. This hospital also does four to eight corneal transplants per month. The development work—on roads, sanitation, health, education—that we’ve undertaken in the constituency is visible and widely acknowledged.

What’s your response to allegations from your school friend Imran Khan that your party is using state funds and apparatus to swing the vote in your favor?
This is baseless. I have had people come to me with details of police cases accusing my opponent of murder and Supreme Court rulings against my opponent, but I’ve told them this isn’t my style. I have not and will not go negative, I don’t believe in mudslinging. I would rather focus on highlighting the PMLN’s policies and accomplishments. Campaigns should be kept clean so that rivals can look each other in the eye with a clear conscience after it’s all over.

But your opponent has already accused you and both your brothers of “corrupt” dealings in a recent television interview.
If Aleem Khan has done something wrong, then it’s between him and God. We will all go to our graves and be judged and punished by Him. I have maintained a positive campaign talking about the PMLN’s sterling performance and the PTI’s politics of disorder, dissonance, distortion, and disruption. I see no purpose in attacking Aleem Khan as an individual or in defending myself and my family against allegations that everyone recognizes as false. There has to be more to politics than that.

How do you see this contest shaping up?
What’s surprised me in the past few weeks is that the people who had joined or supported the PTI in 2013 are returning to the PMLN fold, thanks to our party’s result-oriented policies in Islamabad and Lahore. By-elections are always a little slow, especially in the beginning. You only see a surge in the last week. We’ve started seeing that surge.

A federal minister elected from Lahore went to court against an election tribunal decision similar to the one that forced you into this fresh election. That option was also available to you. Why did you choose not to exercise it?
Each case is different. I’ll be straightforward and frank with you: when I read the [NA-122] verdict, I was shocked. The judge had written about his honesty and fear of God. What judge writes about his honesty? They are all supposed to be honest! He said there were irregularities by the election staff. Not once has he mentioned any rigging to have taken place. In fact, that word does not feature anywhere in the verdict. So, logically, the election officers should have been penalized. Instead, he fined me Rs. 2.4 million. How does that make sense? Winning or losing an election is not the issue; I cannot be held responsible for the mistakes of the Election Commission. Two hours after the ruling, I told the press that I had accepted the tribunal’s decision but with reservations. I was advised to go to court and get a stay order to remain the Speaker, but decided against it. Seven PTI people are currently still members of the National Assembly because of stay orders. I did not want to stay on as the Speaker on the basis of court orders. That is not who I am. My credibility is extremely important to me. In the end, my family and I decided that the dignified and proper way to sort this out was to contest and let the people decide. Prime Minister Nawaz Sharif has fully supported this decision. I have, however, also gone to court to set the record straight but have intentionally forfeited my right to a stay.

The PTI has had a series of setbacks since its long sit-in in Islamabad last year and its governance in Khyber-Pakhtunkhwa province has failed to live up to the initial hype.
The PTI of today is very different from the PTI of two years ago. People have rejected their politics of agitation. This is clear from the Haripur by-election. The PMLN won that constituency by a lead of 3,000 votes in 2013 and 47,000 in August. This is because of the growing confidence in Prime Minister Sharif’s government, which has created a national consensus over the war on terror and strengthened the military’s hand, politically and legally, to ensure that terrorists across Pakistan are dealt with. Even our allies are more confident about Pakistan now, the China-Pakistan Economic Corridor being a clear proof of that.

Aleem Khan took heat for allegedly using the Army chief’s image in one of his campaign posters. You also recorded a video message praising the Army and urging people to support you in this race. Is the Army a factor in this race, and why did you never use that recording?
I recorded a number of scripts that the party’s social media team brought to me. This one was not used because it seemed unnecessary for the campaign. But, yes, I have praised the prime minister and the Army because of Operation Zarb-e-Azb, which the PMLN government initiated as it did the Karachi operation. The Army is a state institution and it should not be politicized. The federal government supported and validated the military resolve against terrorism, providing legislative and political cover and funding. This has to be appreciated.

The PMLN had handpicked Chaudhry Muhammad Sarwar as governor of the Punjab. He quit his post and is now managing your opponent’s campaign. How formidable is Sarwar, a former British M.P., on the campaign trail?
He also managed his son’s campaign in the U.K. If memory serves me right, Anas Sarwar lost his election bid. Electioneering in Pakistan is different from electioneering in Europe. His “formidability” has not been witnessed by us in the campaign. The more pertinent question is: Can a former governor take part in political activities before the mandatory two-year moratorium is over? I think not.

Imran Khan has said he wants the Rangers or the Army to supervise the Oct. 11 election to prevent possible violence and rigging. How do you view this demand?
It is my fervent wish and hope that there is no violence and that voter turnout is high. The inclusion of the Rangers or the Army in the monitoring process will ensure that nothing breaks out. Khan’s statement betrays the PTI’s lack of confidence—the statement seems designed to restrict turnout by playing on people’s fears. This will be a closely watched election conducted in the full glare of the national and international media, as was also the case in 2013. Any irregularities, if they occur, will stand exposed immediately.