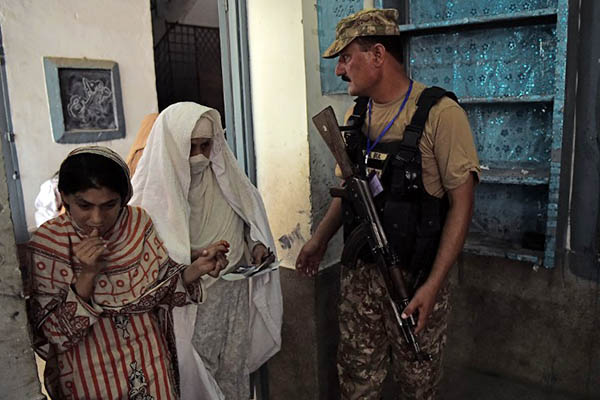 In 2002, then-president Pervez Musharraf sought to rectify this by reintroducing the concept of reserved seats for women in Parliament to encourage participation from women in lawmaking. A clause in the 1973 Constitution of Pakistan had also required the same, but its expiry in 1990 resulted in less than 10 women being elected to Parliament in the general elections of 1993 and 1997.

The worst hit was Khyber-Pakhtunkhwa province, which had no elected women legislators in either 1993 or 1997. The 2008 general elections—which were the first polls conducted under the Elections Act 2017 requiring the Election Commission of Pakistan to cancel any results where women were found to have a turnout less than 10% of registered voters—fared little better. Despite a higher turnout in several constituencies, no women were elected on general seats in Khyber-Pakhtunkhwa. There are however 22 reserved seats for women; 16 of which belong to the ruling Pakistan Tehreek-e-Insaf party.

It has been 16 years since reserved seats for women became requirements under law but the concept remains contentious with detractors claiming it merely props up party stalwarts who do not represent the average woman or her problems. Supporters, meanwhile, believe the mere presence of more women in Parliament serves to temper legislation and encourages greater rights for all. Adding to the controversy is the patriarchal inertia of Parliament wherein women appointed on reserved seats are rarely granted cabinet positions or access to development funds—making their presence in the assemblies largely ceremonial.

One of the women on the PTI’s reserved seats in Khyber-Pahktunkhwa, Ayesha Bano, dismisses detractors who claim she was appointed to Parliament through ‘favoritism’. “I was already part of local government, which is grassroots politics,” she tells Newsweek. A law graduate, she says she will not waste her time in Parliament and already has a legislative agenda she wants to pursue. “My focus is on improving the literacy rate of the province. It’s unfortunate that despite all our resources, we are far behind in this field,” she says, adding education is key to improving living standards.

In addition, says Bano, she wants to work for the uplift of street children—a cause that has already attracted support from Prime Minister Imran Khan. When asked whether her plans would be hampered by lack of funding, Bano says she believes elected representatives should take precedence over parliamentarians appointed against reserved seats. “Elected member struggle more—canvassing for votes—so I believe they should have access to more resources,” she says.

But not everyone agrees. “If anything, reserved seats should get access to more resources since each party is allocated one reserved seat for every four they win through voting. That means our constituencies are actually bigger,” says Shagufta Malik, a member of the Awami National Party who has been appointed to the provincial assembly for the second time.

“All women face some basic issues that we have to work to resolve,” she tells Newsweek. “There are still many sectors and offices where women don’t have separate washrooms,” she says, adding women’s issues in Khyber-Pakhtunkhwa are unfortunately taken lightly despite it being very difficult to enter politics for a woman in Pashtun society.

Pointing to the ruling PTI government in Khyber-Pakhtunkhwa, Malik said it was tragic that no woman had been inducted in the cabinet. However, she said, no one should underestimate the impact women legislators in Parliament have on young men and women. “Seeing women in Parliament gives youth confidence. It encourages women in other sectors as well and even the most conservative regions are accepting more women in employment positions,” she says.

Another woman parliamentarian, the Jamaat-e-Islami’s Humaira Khatoon, said the war on terror had crippled Khyber-Pakhtunkhwa’s economy and severely impacted the people of the region more than any other part of Pakistan. “Women have an exalted position in our society yet despite this they lack ministries or discretionary funds for their constituents,” she told Newsweek, lamenting that most people believed women parliamentarian’s sole function in government was to fulfill quorum of the Assembly and back their male colleagues.

Khatoon says she believes there should be merit-based criteria for the selection of women granted reserved seats. “Women who lack a political background are unlikely to perform their duties per requirements.”

Despite these problems, most women believe that, with time, they will be able to achieve parity with their male colleagues in Parliament. Unfortunately, the road appears long and full of twists and turns. In 2015, during the PTI’s first tenure in Khyber-Pakhtunkhwa, the provincial commission on status of women launched a women empowerment policy, pledging “generous” funding for new women empowerment schemes. The draft text of that policy was not finalized until September 2017. Over a year later, its suggestions still await implementation.