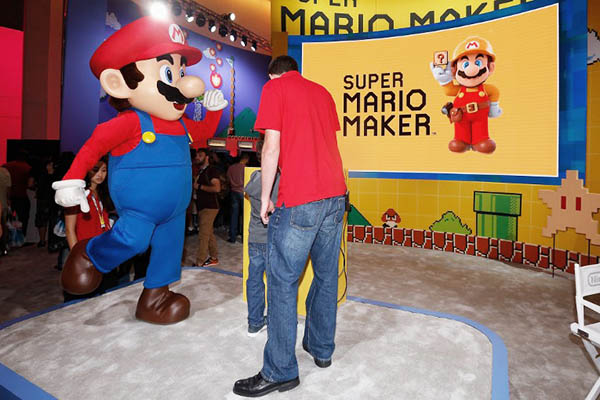 Super Mario, the hyperactive little plumber who has become one of the best-known characters in video game history, celebrates his 30th birthday on Sunday and Japanese giant Nintendo is marking the event with the release of a creative new format.

With his blue overalls, red cap and fulsome moustache, Mario is instantly recognizable, a rare quality in the games market, matched only by a handful of characters such as Lara Croft, Sonic the Hedgehog and Pac-Man. So beloved is Mario that Nintendo has sold more than 310 million units featuring him since he first hit the screens under his own name in 1985, the year that Ronald Reagan began a second term as U.S. president and the Live Aid concerts for the Ethiopian famine relief took place.

“Mario now has a status in popular culture equal to Mickey Mouse,” said Florent Gorges, the French author of a book on Nintendo’s history. “He is likely to be around for some time yet because we notice that it’s often parents who introduce him to their children.”

Even before the first Super Mario Bros game was released on Sept. 13, 1985, in Japan on the Famicom console, the character had already made an appearance in the Nintendo arcade game Donkey Kong, but under the name Jumpman.

The Mario moniker came from the landlord of the warehouse where the U.S. arm of Nintendo was based, whose physical appearance made the programmers think of a video game character.

Mario’s creator, game designer Shigeru Miyamoto, said: “I had it in mind to make him an Italian when I was drawing the character, so I decided to officially call him Mario.”

Mario’s plain appearance is attributed to the limitations of the hardware at the time, with a limited number of pixels and restricted range of colors—but it has possibly helped increase his longevity. “I drew him with a big nose and a moustache so that players could recognize his face. [At first] Mario wore a white shirt and red overalls so his arm movements would be clearly visible,” Miyamoto said in an interview released by Nintendo. There was a simple explanation for his cap too—the designers initially lacked the technology to make his hair move.

In his best-known adventures, Mario comes to the rescue of Princess Peach, but our hero has also been inserted into formats featuring football, golf or karting. The games have often been accompanied by technological advances, such as the fully three-dimensional format introduced by Super Mario 64 in 1996.

To mark the three-decade milestone, Nintendo is releasing Super Mario Maker on the WiiU console, which allows players to create their own worlds for Mario, or use those created by other players and shared through the Internet. And for adults still nostalgic for the Mario of their youth, the new game allows players a choice of four styles of graphics, ranging from those in 1985’s Super Mario Bros to New Super Mario Bros U released in 2012.