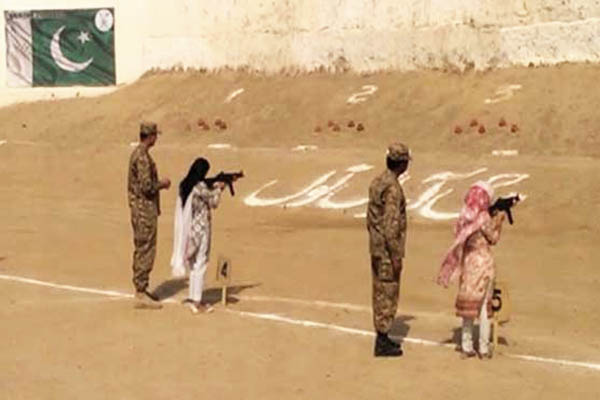 Training students to fend for themselves in case of a terrorist attack is not the answer.

The prompt for this is a picture. Two girls, wearing the traditional shalwar kameez, one with her head covered with dupatta are standing at a firing range, holding Army-issue 9mm, automatic MP5A2s, practicing shooting from a standing position. There are two Army instructors with them. The report says “Army men give firearms training to students in Karachi”.

Incidentally, both girls, expectedly, are not in the correct standing firing position and are holding the submachine guns like novices.

This seems to be the latest in a series of such attempts, except this time it’s the Army and not the police.

Reason: countering terrorist threats. In case there’s a terrorist attack, the (il)logic of this would seem to suggest, the students should be able to fight back. I am actually trying here to figure out how and where to start to show the utter absurdity of this thinking since there’s so much wrong with it. Still, let me try.

I shall begin with the absurd notion that this kind of training can actually help students become fighters. So, we have trained a group of students and now they are ready to face and ward off a potential terrorist attack. Let’s assume we have 200 of them in Karachi University. We will clearly need to reschedule everything for this group, assuming they will be studying and also guarding the varsity.

Their second job (actually, it will become their primary job) would need constant drills, the authorities will have to establish a kote (armory) with 200 automatic weapons, a mix of MP5A2s and SMGs (Type-56). The armory will also need to have enough ammo for these weapons. Let’s say eight magazines per weapon, plus more. This force of 200 will also have to be hierarchical, some of them in charge of overall planning et cetera.

Of course, the armory with so many weapons and ammo will also need to be guarded. I am assuming that we could have a few policemen guard it so the students can focus on fighting the terrorists. Or, perhaps, since the police and the Army are short on personnel, we could have some of these students employed to guard the armory also.

The student ‘officers’ officering this force will be directly in contact with the varsity authorities. Since it will be their responsibility to protect the institutions, it is only right that their word must prevail over the vice chancellor’s and other senior faculty members’ as far as security-related aspects are concerned. This would require giving this force its own offices and quarters, communications equipment, a central control room which monitors all the CCTV cameras and is linked to external police and Army detachments.

I can go on but I am sure you realize the absurdity of the exercise contained in the picture with which I began.

Let’s now get down to what it means to fight a fight with small arms.

You begin by understanding a weapon. That understanding at the first step requires the ability to understand normal safety procedures (NSPs) and field-stripping and assembling a weapon. Please remember that we are talking about static range shooting. Actual combat is a different ballgame altogether. Static range shooting, using pistols and small arms at different distances from an inanimate target, is meant to practice NSPs, improve the accuracy and precision of the firer, train him into the techniques of musketry, enable him to practice firing positions (lying, kneeling, standing) and holding the weapon(s) accurately—generally, to get the feel of the weapon(s) in its nonlethal as well as lethal state. Constant practice is supposed to improve the understanding of NSPs as well as basic shooting skills.

It’s like basic grammar. You need to know the verbs, the nouns, the gerunds, the adjectives and adverbs and a whole lot of other stuff. But once you have got the fundamentals right, building more than just simple sentences requires something more than getting the fundamentals right. It requires ideation, an argument, a sense of structure and the ability to deftly handle the language individually and stylishly.

It’s the same with moving beyond understanding the fundamentals of firing at a static range, turning money into noise as one pumps bullets into a target that doesn’t move and can’t retaliate.

That’s when you need to handle your weapon differently. You suddenly realize you can’t keep one eye closed to aim. And while at the firing range one basic NSP is to never cross the firing line, in combat you are constantly doing that and that requires tremendous muzzle and trigger control. You might have to roll, crawl, crouch, shooting fast and accurate at targets that are moving and retaliating while being aware of your surroundings, your flanks, your rear. At that point your heart is pumping fast, your pulse has gone up and your adrenaline is making your gut churn. Your palms are likely to be sweaty, your grip on the weapon not ideal unless you have trained for such a situation for years.

This is also the point when, more than just the ability to shoot, what will likely save your life is knowing fieldcraft. How to camouflage and conceal yourself; how to move stealthily in a hostile environment; how to detect enemy position(s) and distance through his fire; how to select your firing positions; how to coordinate your fire; how to keep calm under fire and much else.

Infantry and Special Forces personnel train for this for years. As someone who has handled weapons for most part of his life I can assure you through personal experience that this is much easier said than done. At a static range you will be told to focus on your front-sight. In an actual fire-fight I can’t think of anyone who can do that, except the man who has trained so much as to get it right instinctually. That man will have shot hundreds of thousands of rounds in practice at all kinds of targets, static and moving, and would have hundreds of man-hours practicing fieldcraft.

In combat, one is usually required to double-tap, especially when you have the target and you want to make sure that you incapacitate or kill him without his shooting back at you. It requires thousands of rounds of practice to get that trigger reset right after the first shot in a motion so fast and smooth that an onlooker will think you have put two shots in the target with one squeeze.

I can go on but this is not a 101 on shooting and fieldcraft. It is a 101 on the stupidity of a policy that thinks, most probably for reasons of optics, that putting weapons in the hands of students or the faculty and getting them to shoot a few rounds into a static target will somehow enable them to fight off highly-trained, motivated, suicide terrorists.

There’s a threat, yes. But this is not the way to counter it. As for how to do that, I have written before and enough to identify some of those measures that could likely reduce damage. Because, as I have written before, once an attack gets underway, there will be damage. And not all attacks can be preempted.

Absurd knee jerk reactions to extreme situations can be understood and forgiven but our government should now step back from this foolish decision to arm students, taken in the heat of the moment.