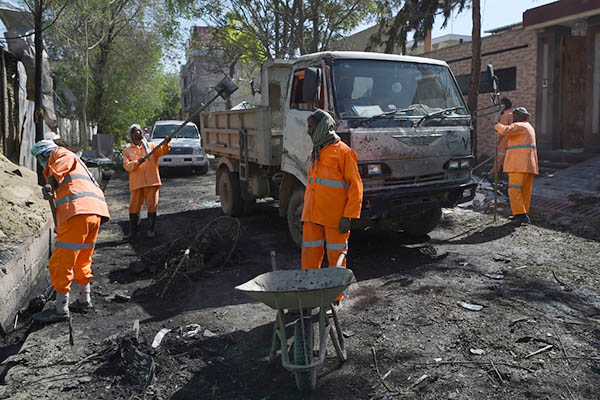 Taliban militants stormed a U.S.-funded aid group’s central Kabul compound on Tuesday, having targeted the organization for promoting Western culture and the “inter-mixing” of men and women.

Interior ministry spokesman Nasrat Rahimi said the death toll had risen to nine, from an earlier tally of five, including five members of the Afghan security forces, a guard at Counterpoint and three civilians. The latest attack in the Afghan capital came even as U.S. and Taliban officials were meeting in Qatar for peace talks. The assault began around midday with a large explosion at Counterpart International, a non-profit group funded primarily by the U.S. Agency for International Development (USAID) and the U.S. State Department.

Rahimi said four attackers then entered the compound before Afghan security forces launched an hours-long clearance operation. At about 6:00 p.m., Rahimi said “all the attackers have been killed.” He said about 200 people had been rescued from the area throughout the day.

In a statement, Counterpart said it was working to confirm the well-being of its staff.

Counterpart’s website says it runs an Afghan civic engagement program supporting women and other marginalized groups across Afghanistan. Among its stated goals is providing access to election information for Afghan voters, many of whom live in rural areas.

The Taliban’s hardline statement against Western values comes as the group meets with U.S. peace envoy Zalmay Khalilzad in Doha in the latest round of talks aimed at finding a way out of Afghanistan’s nearly 18-year old war.

The Taliban are notorious for their treatment of women during their reign from 1996-2001, when the Islamist extremists kept women locked up in houses, barred them from getting an education and sometimes stoned them to death on flimsy allegations of adultery.

The huge explosion shook nearby buildings and shattered windows, and Rahimi said at least 24 people were wounded—including one foreign national. “We started running out of the building and while running outside, I heard small gunfire and the sound of grenades going off nearby,” said Akbar Khan Sahadat, a prosecutor in the Attorney General’s office, which was close to the scene of the blast.

John Bass, the U.S. ambassador to Afghanistan, strongly condemned the attack against a U.S. non-governmental organization. “The targeted organization helps local communities, trains journalists and supports the Afghan people,” Bass said on Twitter. “For this, it is the target of senseless violence,” he added, thanking local security forces for their rapid response.

Suhail Shaheen, the Taliban’s political spokesman, told AFP earlier this week that the latest round of peace talks, currently taking place in Doha, had become bogged down over the issue of when foreign forces might withdraw in return for the Taliban security guarantees. The two foes are hammering out a deal that could see foreign forces leave Afghanistan in return for a ceasefire, talks between the government and the Taliban, and a guarantee the country will not be used as a safe haven for terror groups.

Thomas Joscelyn, a senior fellow at the Foundation for Defense of Democracies and editor of its Long War Journal, said Khalilzad is only “pretending” the Taliban can credibly renounce international terrorism. “This is an obvious terrorist attack by the Taliban right inside Kabul—they deliberately targeted a civilian facility,” Joscelyn said on Twitter.

The talks follow a massive peace summit in Kabul last week where President Ashraf Ghani offered the Taliban a ceasefire to begin on the first day of Ramzan—but the insurgents refused.

Last year however the Taliban announced a three-day ceasefire at the end of Ramzan after Ghani declared a unilateral truce for eight days earlier in the month, in the first formal nationwide ceasefire since the U.S.-led invasion of 2001. Since then, the insurgents have steadfastly refused to talk to Ghani, who they view as a U.S. puppet, and talks thus far have cut out his government.