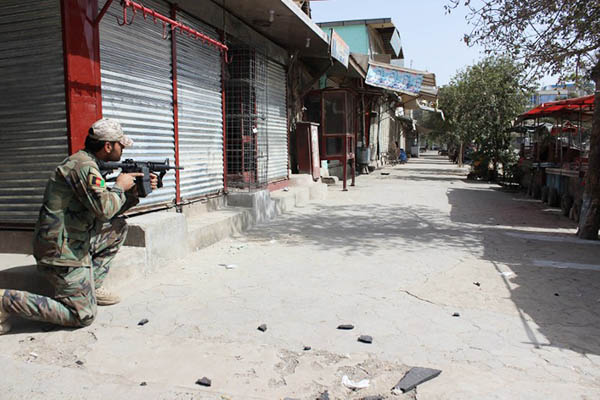 Over 37,000 people displaced in one week alone—more than 10 percent of annual total in previous years.

The Taliban’s latest offensives in the north and south of Afghanistan have killed dozens of people and displaced tens of thousands, officials said on Monday.

Earlier this month the militants launched a full-fledged attack on Kunduz, briefly entering the northern city and triggering fierce fighting with Afghan forces that forced thousands of residents to flee. Last week the militants also launched a new attack on Lashkar Gah, the besieged capital of volatile Helmand province in the south. They killed dozens of security forces personnel before being pushed back when government reinforcements arrived.

“Due to hostilities in Kunduz and intensified fighting across the south we have seen a jump of 37,000 IDPs alone—more than 10 percent of the year total in just one week,” Danielle Moylan a spokeswoman for the United Nations Office for the Coordination of Humanitarian Affairs, told AFP.

The total number of internally displaced people due to fighting since the start of the year stands at 323,500.

In Helmand, which has seen some of the worst fighting since the Taliban began their insurgency against the western-backed Kabul government in 2001, authorities reported dozens of troops had been killed and more captured. “Around 50 Afghan security forces were killed, and the same numbers went missing in Helmand province over the past two weeks,” said Tooryalai Hemat, the Helmand governor’s adviser.

Shir Muhammad Akhunzada, a parliamentarian, told parliament around 70 soldiers had surrendered to the Taliban.

The Taliban have intensified attacks across the war-torn country in recent months, pressuring Afghan forces stretched on multiple fronts. Apart from their assaults on Kunduz and Helmand, they have attempted to overrun other provincial capitals, from Baghlan in the north to Farah in the west, but have so far been repelled.