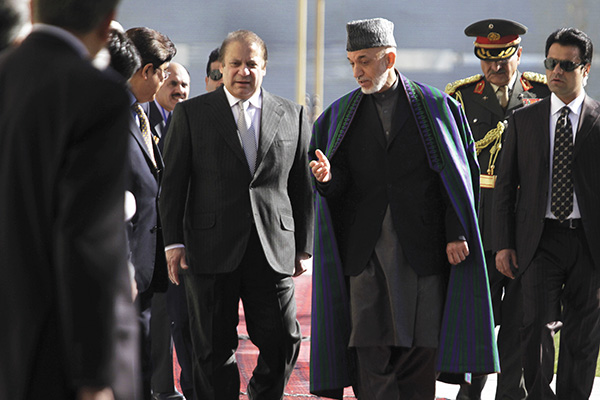 After failing to secure peace talks with the Taliban on Pakistan’s side of the border, Prime Minister Nawaz Sharif urged the Afghan people to avoid conflict and pursue peace with the Afghan Taliban ahead of the U.S. troop withdrawal in 2014. In his first visit to the neighboring country since he came to power, Sharif addressed a joint press conference with President Hamid Karzai in which he advocated an inclusive political settlement. “Pakistan will continue to extend all possible facilitation for the Afghan peace process,” he promised, adding that Islamabad had released former Taliban leader Mullah Baradar to support the talks. Karzai responded in kind, saying, “There is no doubt that since [Sharif] has taken office … cooperation and relations with Afghanistan have expanded.” However, despite the bonhomie between the two leaders, relations between the governments remain turbulent and unpredictable. A strategic partnership between India and Afghanistan that allows Afghan soldiers to receive Indian training persists as a point of contention. Afghanistan also heads to the polls next year and it is too soon to predict how a new president will deal with Pakistan. Under Karzai and Sharif, the “brotherly” countries appear to be united in their pursuit of peace—at least on the surface.