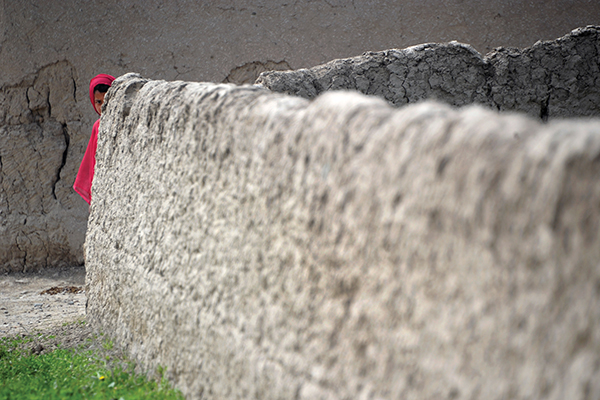 The story of an invincible nation.

[dropcap]A[/dropcap] commentary on the “chaos and nonsense” in our region, Happy Things in Sorrow Times, the latest novel by Pakistani author Tehmina Durrani, is similar in some ways to Lewis Carroll’s Alice’s Adventures in Wonderland. Like Carroll, Durrani has illustrated the book herself; she painted the watercolors while visiting refugee camps in Kandahar and Torkham, Afghanistan, and in Chaman, Pakistan. Like Carroll’s Alice, Durrani’s Basrabia, a little Afghan girl, seeks to make sense of the cruel meaninglessness of what is happening to her and her people.

Durrani is a survivor in a country where women are not considered full human beings under law and where men have more marbles than mind. Her previous three books speak to this. In 1991, her debut book, My Feudal Lord, revealed the violence and cruelty she faced at the hands of her feudal-politician husband.

Four years later, the runaway success of her debut was followed by A Mirror to the Blind, a biography of social worker Abdul Sattar Edhi, a man who eventually helped her reconcile with her parents who were upset about the revelations she published in the warts-and-all first book.

In 1998 Blasphemy made waves. Its release was timely, as it coincided with the national pastime of persecuting non-Muslims under a defective insult law. The novel is about a woman who is killed for “blasphemy” for insulting the feudal-saint hero. It is about a girl who was packed off as a 15-year-old bride to one Pir Sain, a 37-year-old custodian of a shrine in south Punjab. God spoke through Sain, whose temporal power was supplemented by his divine lineage. Sain was politically well-heeled, invited by Islamabad to attend conferences of holy men held to shore up military dictatorships. But he was more priapus than pir. He was the Marquis de Sade of the feudal countryside, where boys sodomized each other when not deflowering donkeys. The man had killed two wives earlier through acts of savage copulation.

With Happy Things, Durrani writes close to her own life. The irrepressible little Basrabia is actually the Afghan-Pakhtun refugee girl she brought up, and it is not difficult to see the author in her. She writes in the dedication: “My paternal grandfather, Maj. Muhammad Zaman Durrani, belonged to the Popalzai clan of the Abdali tribe. He migrated from Kandahar to the Charsadda district of … Khyber-Pakhtunkhwa. My paternal grandmother was the daughter of Syed Amin Jan Bacha, ruler of Kunar, in Afghanistan’s Nuristan province.”

An invincible Afghanistan is worse than a defeated one.

Born under bombs falling from the sky, Basrabia grows up asking questions no one can answer. Her hero, a boy named Sher Khan, is a tribal child with hubris written into his DNA. He is young, full of bravado, wearing freedom on his sleeve, and equating defeat with women. Basrabia idealizes him as her dream prince despite knowing he was incapable of thinking straight. She tells him: “Women know more things because they think.” Her advice to the “unintelligent” warrior is not taken. He is the warlord at the end of the book who whisks her away to an uncertain end because jihad, not life, is ongoing.

There is something fatal about the girl’s choice of male partners. She is stuck with Sher Khan, who can’t think long enough to even define his own worldview. There are a couple of pages when Durrani replaces Sher Khan with lesser Sher Khans: the author’s judgment of these surrogate men is apparent when Basrabia is courted serially by a rat, a crow, and a mosquito—each claiming to be him.

There is fate in the final reunion with a defective hero—who may actually be Mullah Omar, the disappeared leader of the Taliban whose life has always been shrouded in mystery. Dictum: “Be you a girl or a woman, if you have an empty space in your heart, even a mouse can fill it.” Even more to the point: “Why do you think that the first Sher Khan was the real Sher Khan?”

Basrabia enters a foster home for refugee girls run by an international NGO. After they couldn’t stop her from returning home, she is allowed to join a hospital in Kandahar. (After 9/11, the author too went to Kandahar “to see and hear for myself.”) After this, the narrative becomes a bit more obvious. The questions asked of America seem to creep out of the security narrative embraced by the Pakistani state. (Probably, only Noam Chomsky can do this right.) Basrabia becomes unoriginal in her thinking.

At the end of the book when Basrabia reunites with Sher Khan, he speaks about the invincibility of his country: “No one should forget that history is replete with examples of defeated armies retreating from the adventure of walking into Afghanistan’s landscape.” But an invincible Afghanistan is worse than a defeated Afghanistan. Half its population flees across borders every time the country defeats its invaders. Because it is not a state, it allows warlords to flourish and foreign elements to use it as a platform. Defeats are instructive and transformational; victories often produce hubris. For the sake of its women and children still striving for a semblance of normalcy, one hopes Afghanistan becomes much less invincible.

tehmina is the PULSE of the CHILDREN of War who has a Global VISION FOR the world to unite & raise this one question WHY WHEN & WHO will Give Another Chance for the wounded Heart,,,,,,,,,
The Super Power and the Decision makers think and reply as
WE ARE THE PEOPLE we are the World ,