Home Features The Long Road Ahead

The Long Road Ahead 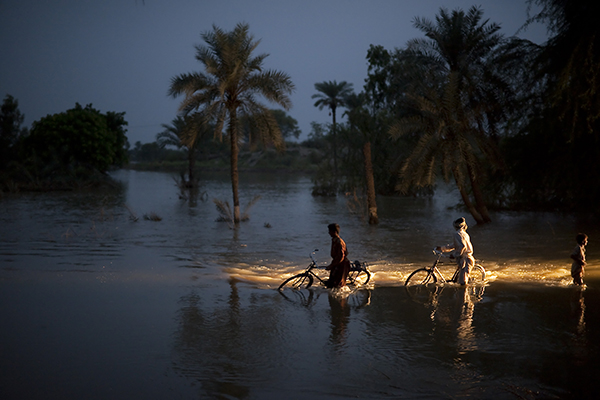 After the storm‚ a devastating legacy that will roil Pakistan in many troubling ways.

[dropcap]O[/dropcap]nce a prosperous man‚ today Haji Jamal Shah spends his days totaling up his losses. “It was like a bombshell. I came to open my café and my shop one morning and the Kabul River had practically run over all of my belongings,” he says from his seat on a boulder outside a shopping plaza in suburban Nowshera. Across Shah’s home city, businesses have been destroyed and people displaced by the devastating flooding that has crippled a fifth of Pakistan in less than a month.

Public anger over the government’s failure to adequately respond to this natural disaster is palpable in this once-thriving city in Khyber-Pakhtunkhwa province, a frontline in Pakistan’s campaign against Taliban militants. As Shah speaks, a group of about 20 gathers across the road to vent their anger. In a region awash with automatic weapons, they carry only stones, but Sameen Khan, the self-proclaimed leader of the group, vows to seek revenge if the government fails to help the flood victims.

Scenes such as these are playing out across the country and are now a central concern of policymakers in Islamabad, who have been forced to manage the fallout from a catastrophe some are calling the world’s worst natural disaster. The government estimates that the 2005 earthquake centered in Kashmir took more than 70,000 lives—far more than this year’s floods, which have claimed 1,600—but government leaders and relief officials claim that recovery from this tragedy will take much more effort. “In the earthquake, you had many more deaths, which shook the world,” says Shah Mahmood Qureshi, Pakistan’s foreign minister. “The floods are an evolving situation with one peak after another.”

On Aug. 23, President Asif Ali Zardari said, “This is a long-term situation, and one has to have the capacity to sustain yourself for three years, or even more, and not exhaust yourself immediately.” The government is yet to put together a detailed account of the losses. But senior finance ministry officials in Islamabad say the growth rate for Pakistan’s economy during the present fiscal year, which began in July and will end next June, will drop to a range of between zero and 2 percent, severely down from the targeted growth rate of 4.5 percent before the floods. The World Bank and Asian Development Bank are compiling an assessment report, which is due in October.

The Pakistan government’s National Disaster Management Authority estimates that more than 1.2 million homes were destroyed by the floods, and in another government estimate, crops covering 7.9 million acres, some 16 percent of the country’s cultivable land, were reported to have been destroyed, raising questions over the future of food security.

For the country as a whole, the scale of the disaster, by some estimates of up to $15 billion, makes it a monumental task to return to relative normalcy.

Nowshera businessman Shah estimates his losses at Rs. 6.5 million worth of stock. In a country where opportunities for reliable insurance services are virtually nonexistent, Shah, like many Pakistanis, could find himself pressed to seek every opportunity to recover his losses, ranging from borrowing money from friends and family to pulling out savings. But for the country as a whole, the scale of the disaster, by some estimates of up to $15 billion, makes it a monumental task to return to relative normalcy. A senior U.N. official, who has previously served in disaster locations in other developing countries and is now based in Islamabad, believes the timeframe for recovery could stretch for up to 10 years.

Some Nowshera roadside shops selling cloth, once a hit with motorists driving to and from Peshawar, have lost stock worth millions of rupees. And in the absence of motorists, roadside fruit sellers, known for offering export-quality stock, are struggling to break even.

These floods will force more farmers to beg than any other calamity in Pakistan, says Saeed Malhi, a cotton farmer with a five-acre farm outside Muzaffargarh, once a thriving center of cotton trade. Malhi recalled witnessing his cotton fields disappear as the water rose from the nearby Chenab River. “With every inch of water, my heart simply sank. I could see my crop vanishing, and I was helpless,” he says. Initial estimates from the World Bank suggest that losses to Pakistan’s agricultural sector alone could total $1 billion, though officials from Pakistan’s developmental institutions believe the number could increase. An estimated 80 percent of the flood-hit population depends on agriculture for their livelihood.

Government officials warn that Pakistan’s central challenge comes from badly damaged or destroyed infrastructure. At least 100 bridges in Khyber-Pakhtunkhwa province and Gilgit-Baltistan need rebuilding, as do portions of roads washed away in different parts of the flood-ravaged regions. It is still early for a detailed assessment of the damage, but officials say none of the more significant dams will need to be rebuilt.

Additionally, the losses from the larger industrial units, notably in the energy sector, located in rural areas such as south Punjab, may add to loss of income in rural areas.

Looming over all the physical and economic destruction wrought by the flooding is its still-unfolding impact on Pakistan’s political future. In mid-August, the first major public protests by flood victims shook the city of Sukkur in Sindh. Emerging from tents in a makeshift camp, as many as 300 to 400 people came out in full-throated anger demanding better treatment. Some marched toward a nearby road and used boulders to block traffic.

While these events raise the troubling prospect of a country in which the citizenry is poised to protest violently in the streets, it is too early to conclude that Pakistan is witnessing the beginnings of an historic change. “It is natural to see such public reaction after such a calamity,” said a senior Western diplomat based in Islamabad, who wished to remain anonymous. “But across the world there are examples of large communities of slum dwellers living side by side with those who are well-heeled. If revolutionary change was the natural outcome of people in distress, we would have had many [revolutions],” he says. Around the world, the stakes in Pakistan’s stability are high. “No one wants Pakistan to go out of control, so there will be enough assistance to help Pakistan overcome the first wave from the tragedy,” he added.

The international community is likely to help Pakistan overcome its initial shock. For the U.S. in particular, instability in nuclear-armed Pakistan is a harrowing prospect. Yet, more troubling is Pakistan’s ability to tackle the so-called second wave once emergency relief operations have ended—the question of medium- to long-term rehabilitation of the estimated 17 million people affected by the flood.

Far away from the policymaking circles of Pakistan and the rest of the world, Malhi, the farmer, is clear about the future. More crimes, more mayhem, and more chaos are now Pakistan’s destiny. Short of a miracle which fixes Pakistan and helps us return to better times, the future will just be bleak,” he concludes, as tears roll down his eyes, standing besides his once-thriving cotton fields, now flooded along the Chenab.