Home Culture The Persistence of Levity

The Persistence of Levity 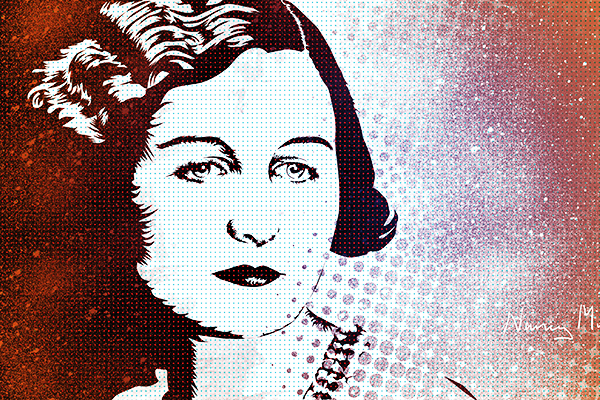 Nancy Mitford’s early novels reveal a wit in the making.

[dropcap]L[/dropcap]ast week, reading Nancy Mitford’s first foray into fiction, the novel Highland Fling, I positively exulted. The book had ingenuousness to it, an unchecked enthusiasm, that surprised me; and if it was less polished than her later novels, this seemed to me not a flaw but an asset. So I was surprised that Mitford (so she told her friend Harold Acton) was embarrassed by it, and I wondered why.

My suspicion is that she feared it revealed her own romantic misadventures too transparently. She published the book in 1931, the year she would turn 27, when she was hopelessly in love with Hamish St. Clair-Erskine, a handsome, dashing, noncommittal, and quite obviously gay man from her brilliant social set (which included Acton and Evelyn Waugh). St. Clair-Erskine would break up with her the following year by telephone.

The genesis of their doomed affair can be guessed in Mitford’s touchingly wish-fulfilling account of the courtship between two of Highland Fling’s lead characters—the lovely Jane Dacre (Mitford in mufti), a neurotic young peeress, “thought by some to be exceptionally stupid, and by others brilliantly clever,” who yearns to be “the wife of a genius”; and Albert Memorial Gates, an artist obsessed with home décor who wears crepe de chine blouses and tight orange plaid pants and emits lacerating putdowns with the rat-a-tat regularity of a Howitzer. “If he is a trifle affected—well, I don’t know that that’s such a terrible fault in a young man,” observes a guest at a house party where they skirmish. Jane, her head booby-trapped by mind games, at first rejects Albert’s overtures, but after he strategically ignores her, she lurches helplessly into love, which—this being fiction—stands a good chance of being gratifyingly returned.

Like the legions who worship not only Mitford but the idea of her, I had read (and sometimes reread) her later novels, Love in a Cold Climate, The Pursuit of Love, The Blessing, Don’t Tell Alfred, and even Wigs on the Green—her 1935 satire of her sister Diana’s obsession with the British fascist leader Oswald Mosley. But I had never hunted down this first novel, its sequel, Christmas Pudding (1932), or Mitford’s wartime spy caper Pigeon Pie. Vintage has just now released all three titles (Christmas Pudding and Pigeon Pie have been combined in one volume), which provide sparkling, escapist reading for the Downton Abbey fan base (Downton creator, Julian Fellowes, wrote a new introduction to Highland Fling and calls it a “restful and hilarious read”), but these early novels will also captivate Mitford devotees, who will find in their pages not only clues to Mitford’s personal history, but a demonstration of the evolution of her literary skills.

Mitford’s most popular novels have often been compared with those of P. G. Wodehouse, but their crackling candy coating has never been as yielding to the bite as Wodehouse’s taffy. Highland Fling is softer, more lighthearted, and more screwball than her later novels, and shows that she adjusted the temperature and texture of her style as her career lengthened, and her outlook on romance hardened.

In it, a besotted young married couple named Walter Monteath (a poet) and Sally Dalloch Monteath (a cash-challenged heiress) accept an invitation to castle-sit a Scottish estate (and its grouse moor) for two months. The invitation comes in handy because the Monteaths, charming and patrician as they are, are penniless (though they dine at the Ritz, shop at Cartier, and drive around in Daimlers). The holiday in the Scottish highlands allows them to profitably sublet their London digs. At the castle, they entertain a passel of tedious hunting fanatics and desiccated toffs while matchmaking between Jane and Albert.

Though this setting may sound frivolous, Mitford’s cynical, rather crushing observations on love have startling power and pathos. Sally, assessing Jane and Albert’s chances at marital bliss, muses, “If they’re happy for a year or two it’s more than lots of people get out of life.” The most sustained pleasure in this recreation comes from absorbing the generosity its characters display as they tirelessly assess each other’s emotional barometers and offer helpful advice. Why do they have so much time for such altruism? Of course, it’s because none of them has to work for a living. “There are worse things than poverty, though I can’t for the moment remember what they are,” harrumphs one of the aristo huntsmen. “A poet of Walter’s ability has no business with money troubles and jobs and nonsense like that.” Who does? Well … of course, everyone who doesn’t drive Daimlers or dine at the Ritz—but who wants to read about them?

You scarcely notice the sadness given Mitford’s precocious knack for disguising philosophy as repartée.

The sequel, Christmas Pudding, follows the further adventures of Walter and Sally at another country retreat with another romance-minded heiress (this one cash-flush), named Philadelphia Bobbins.

Delphie must choose between a stuffy old lord and a soupy young novelist named Paul Fotheringay (whose tragic, self-serious novel, “Crazy Capers,” has, to his mortification, been hailed as a thigh-slapping, melodramatic comedy). Sally, though completely in love with her own husband, has no illusion that this is the rule and cautions Delphie against saccharine daydreams: “Nobody is in love with their husbands before they marry,” she tells her, “It’s hardly ever done.” The weak-willed Paul, who longs to marry young Delphie (whom he’s known for all of three weeks) knows the odds are against them: “When one’s friends marry for money they are wretched, when they marry for love it is worse,” he observes. “What is the proper thing to marry for, I should like to know?” His friend (actually, Walter and Sally’s friend), a wealthy, much married ex-tart named Amabelle, thinks she knows. “Marry for love if you can, it won’t last, but it is a very interesting experience and makes a good beginning in life. Later on, when you marry for money, for heaven’s sake let it be big money. There are no other possible reasons for marrying at all.” Much sadness and resignation underlie Mitford’s gaiety in these two maiden efforts, but you scarcely notice, given the author’s precocious knack for disguising philosophy as repartée.

Her war novel, Pigeon Pie, stands apart from the other two, and from the rest of her oeuvre. In it, she attempts sheer invention—rather than the artful enhancement of real but unusual lives that characterizes her other work. Her ditzy heroine, Sophia Garland, gets a jolt on Aug. 31, 1939, when she spots a sign announcing the outbreak of war, while driving her Rolls-Royce through “grey and nondescript towns on the border between England and Scotland.” Actually, it’s Sophia’s chauffeur who’s driving; she confirms the unlikely vision with him: “Did you see?” she asks. “Yes, m’lady, I did,” he responds. Noticing villagers propping sandbags against a “hideous late-Victorian church,” Sophia fears the war less than she loathes the church, “so ugly that it might have been specially made for bombs.” Nonetheless, in London, Sophia joins the war effort to impress her patriotic lover (she has a husband, too, who’s barely worth thinking about) and embarks upon improbable espionage escapades, hoping to come off as a Mata Hari in furs and printed chiffon.

While Pigeon Pie shows that Mitford lacks John Buchan’s knack for spy plots (she brings up The 39 Steps to signal her intention), her strength here, as ever, resides in her neat encapsulations of people and motives. Sophia’s lover admires her for “the way she rushed from hyperbole to hyperbole, ending up on a wild climax of improbability with the words ‘It’s absolutely true’”; while her husband despises her for that same attribute, considering her “insular, facetious and babyish.” Sophia’s cronies (including a couple of cabinet ministers) are similarly fanciful, limiting their wartime sacrifices to ordering white wine instead of pink champagne at dinner.

But Mitford successfully extends her breezy character sketches not only to the players in her social world, but to war-weary England, Europe, and America personified—who all hang back from engaging with Hitler, hoping he’ll tire of his bluster and leave them to their parties and their domestic concerns. “The belligerent countries were behaving like children in a round game, picking up sides, and until the sides had been picked up the game could not start,” Mitford astutely remarks. “People made jokes about how there was the Boer War, and then the Great War, and then the Great Bore War. They said Hitler’s secret weapon was boredom.” Hitler soon, unfortunately, got less boring, to the grief of the noninsular world, and to the misfortune of Pigeon Pie—which came out alongside the Battle of Britain, suffering the reverse fate of poor Paul Fotheringay’s novel “Crazy Capers” in Christmas Pudding, becoming a comedy made tragic by timing.

With World War II distant in the rearview mirror, the edifice of Mitford’s wit and ingenuity survives unscathed, a monument to the persistence of levity. These three books contain the timeless, bristling whimsy of a woman whose active mind springs from the page, and who possessed the rare gift of spinning disillusionment into fantasy—making them a welcome refuge for any reader, in any era.