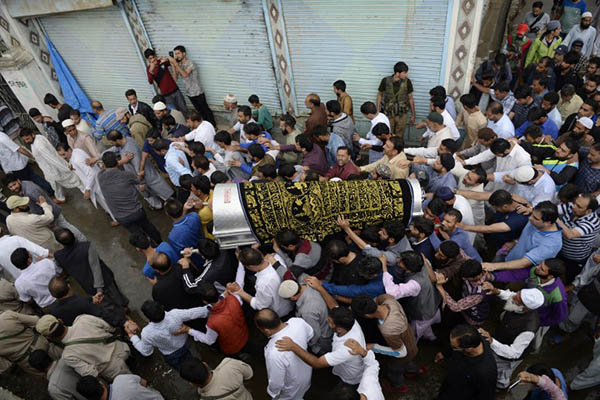 Thousands of mourners on Friday thronged the funeral of a veteran journalist shot dead by unidentified gunmen on a motorbike outside his office in the main city of India-administered Kashmir.

Shujaat Bukhari, a leading journalist and editor of the English-language daily Rising Kashmir, was leaving his office in Srinagar on Thursday evening when three assailants roared up and fired several shots from close range.

Bukhari, 50, was rushed to hospital but was later declared dead. Two of his personal security guards also died.

On Friday, funeral prayers were held at the Jamia Masjid grand mosque in Srinagar before the burial in his native village in northern Kashmir. Bukhari, who was given police protection following three attacks on him in the past decade, had been a strong advocate of peace in Kashmir.

The Himalayan territory has been divided since the end of British colonial rule in 1947 and both India and Pakistan claim it in full. New Delhi has about 500,000 soldiers in the part of Kashmir it controls, where armed groups are fighting for independence or a merger with Pakistan.

Bukhari took part in informal peace talks on Kashmir with Pakistani representatives in Dubai last year. His final tweet, sent just a few hours before his murder, was a link to his website’s reporting of the U.N. human rights chief calling for a major investigation into abuses committed by both India and Pakistan in Kashmir.

The identity of the attackers and the motive for the killing remains unclear but Srinagar police released CCTV footage of three men on the motorbike and said a fourth suspect had been arrested. The suspect was identified from a video, which showed him taking a pistol from Bukhari’s vehicle after the attack and vanishing from the scene of crime.

“We need to understand the larger conspiracy. It’s a terror-related crime and we are investigating,” police inspector general S.P. Pani said at a news conference. Syed Salahuddin, chief of the United Jihad Council, an amalgam of militant groups, condemned Bukhari’s killing and accused India of his murder.

The government of India-administered Kashmir has initiated a high-level investigation into the attack that came just ahead of the major Muslim festival of Eid. Rising Kashmir on Friday carried a full-blown portrait of Bukhari on its front page against a black background.

“We won’t be cowed down by the cowards who snatched you from us. We will uphold your principle of telling the truth howsoever unpleasant it may be,” the paper wrote in an obituary.

The murder has been condemned by both Indian and Pakistani leaders who hailed Bukhari as a fearless and courageous journalist. In Muzaffarabad, the capital of Pakistan-administered Kashmir, some 250 protesters gathered outside the Central Press Club and demanded an independent investigation into Bukhari’s death.

Uzair Ahmed Ghazali, chairman of Pasbaan-e-Huriat, a representative group of refugees from India-administered Kashmir, said Bukhari was killed because of his contributions to the U.N. report on Kashmir. There has been no claim of responsibility for the attack but journalists have regularly faced intimidation and attacks by anti-India militant groups and government forces for their coverage of the dispute.

At least a dozen journalists have been killed in the nearly 30 years of the conflict in the restive region. The string of killings began at the peak of the armed insurgency in the early 1990s when the head of a state television station was shot dead allegedly by militants.

Another newspaper editor was killed in 1991, followed by the 1995 bombing of a BBC correspondent’s office that also left an AFP photojournalist dead.

A video journalist with a local cable TV channel was shot dead by government forces in 2008 while a photojournalist lost both his eyes after police fired shotgun pellets at him while he was covering anti-India protests in 2016.

Most of the murders remain unsolved.