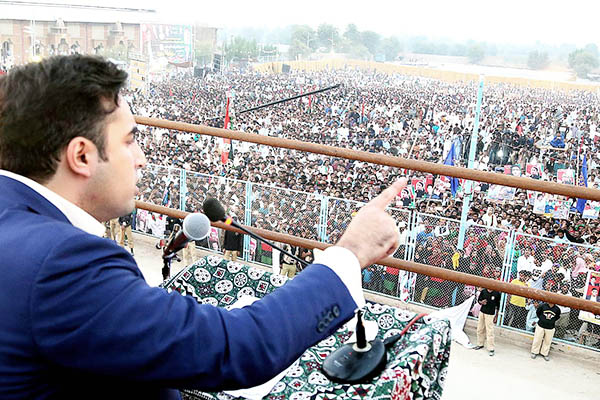 Addressing Pakistan Peoples Party (PPP) supporters in Daharki, a city in the Ghotki district of Sindh on Nov. 4, Chairman Bilawal Bhutto-Zardari was hardly cryptic when he linked Imran Khan and his “movement” to two former chiefs of the Inter-Services Intelligence (ISI): General Hamid Gul and General Ahmad Shuja Pasha.

Referring to an incident from 1993-94, narrated by Pakistan’s famous philanthropist Abdus Sattar Edhi, the PPP chief asked Khan to recall his past connections with Hamid Gul. Edhi, on June 23, 2011, had told Express TV: “Once I was approached by General Hamid Gul, Imran Khan and few others, mostly military and intelligence officials, who were conspiring to overthrow Benazir Bhutto’s second government and wanted me to get involved. I declined because I am a social worker and not a politician. I also did not want to tarnish the credibility of my organization by getting embroiled in something that obviously seemed quite disturbing. Eventually, I was made to feel threatened enough to temporarily leave the country and go to London.”

But Edhi wasn’t the only one to have alleged links between Khan and ISI officials. English daily The News, on Sept. 4, 2014, narrated comments by the PTI’s ex-president, Javed Hashmi, which he broadcast on Geo TV after being cashiered: “There was an impression in the party that ISI chief General [Ahmad Shuja] Pasha is active in Lahore and had met Imran Khan at the house of Shafqat Mahmood. The root-cause of all our problems are the retired generals and brigadiers who have formed their own organizations. They hatch schemes and their suggestions are listened to in the Army. Former brigadier Ejaz Shah [of the ISI] had prepared press conferences on election rigging for the PTI. They came to us day and night and when [secretary general PTI Jahangir] Tareen met with him [Shah], Shah Mahmood Qureshi was sent out.”

Bhutto-Zardari’s willingness to fight against the notoriously short memories of Pakistan’s masses is laudable—whether Khan and his supporters will pay heed is another matter entirely.

Abdul Sattar Edhi should have been this year’s Nobel Peace Prize winner. Pakistani leadership is guilty of not pressing his case. That he was accosted by the likes of IK, Gul & Pasha for a sinister plot was stated by Edhi long ago reinforces the belief that Pakistan did not deserve Edhi. As for IK, he has been treading the forbidden ground for quite some time frequently talking about “umpire” and “third force”.