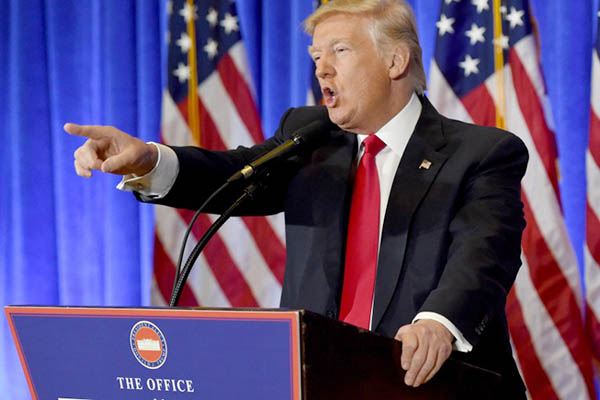 Donald Trump attacked U.S. intelligence agencies and the media on Wednesday as he denied explosive allegations about his ties to Russia, but admitted for the first time that Moscow had likely meddled in the U.S. election.

Just over a week before he takes office, Trump said he had ceded “complete” managing control of his global property empire to his two adult sons but stopped short of making a full divestment, earning a swift rebuke from an ethics watchdog and Democratic Party opponents. “It doesn’t meet the standards that the best of his nominees are meeting and that every president in the last four decades has met,” said Walter Shaub, director of the Office of Government Ethics. “He needs to get rid of his business interests and he needs to put them in what’s called a blind trust,” Democratic Senator Elizabeth Warren told Bloomberg TV.

But the hour-long press conference, his first in six months, focused firmly on the unsubstantiated claims that his aides colluded with the Kremlin to win the U.S. election, and that Russia has compromising information on Trump.

The president-elect accused CNN of generating “fake news” and slammed BuzzFeed as “a failing pile of garbage” after it published a dossier with the allegedly incriminating material, drawn up by a former British intelligence agent hired to do “opposition research” on Trump. “It’s all fake news. It’s phony stuff. It didn’t happen,” he said, referring to allegations of lurid behavior in a Moscow hotel room.

The 70-year old Republican billionaire suggested it may have been released by the intelligence agencies, which would be a “tremendous blot on their record.”

Trump dodged questions about whether his campaign had contacts with Russian intelligence, instead tearing into reporters whose outlets reported on the allegations of the existence of compromising material. “I’m not going to give you a question. You are fake news,” he told a CNN reporter, igniting a fresh raft of questions about his respect for constitutional guarantees about the free press.

The U.S. intelligence community concluded Moscow interfered in the November election in a bid to tip the race in Trump’s favor. But intelligence chiefs last week presented Trump, as well as President Barack Obama, with a two-page synopsis on the potentially embarrassing but unsubstantiated allegations involving Russia, according to CNN and The New York Times.

U.S. intelligence chief James Clapper late on Wednesday expressed his “profound dismay” to Trump over the leaks. “This evening, I had the opportunity to speak with president-elect Donald Trump to discuss recent media reports about our briefing last Friday,” Clapper said. “I expressed my profound dismay at the leaks that have been appearing in the press, and we both agreed that they are extremely corrosive and damaging to our national security,” he said, adding that he did not believe that the U.S. intelligence community was the source.

Even before the new allegations became public, Democrats and Trump’s Republican allies had become increasingly uneasy about Russia’s role in the election, with calls for an independent investigation growing. The Kremlin has dismissed the dossier as a “total fake” aimed at damaging bilateral ties.

Trump began the press conference muted and disciplined, but became increasingly agitated as questions piled up.

The president-elect finally admitted for the first time that he believes Moscow likely meddled in the U.S. election. But while secretary of state-designate Rex Tillerson, also seen as close to Moscow, called Russia a “danger” during his confirmation hearing, Trump may have fanned the flames by downplaying Moscow’s role.

“As far as hacking, I think it was Russia, but I also think we’ve been hacked by other countries, other people,” he said. Trump aides bristle at the suggestion that Russia weighed in behind Trump, seeing it as an effort to delegitimize his election victory.

Trump again refused to back away from his openness towards Russian President Vladimir Putin. “If Putin likes Donald Trump, I consider that an asset, not a liability,” Trump said. “I don’t know that I’m going to get along with Vladimir Putin. I hope I do. But there’s a good chance I won’t.”

Without corroborating its contents, BuzzFeed published a 35-page dossier of memos on which the synopsis reportedly presented to Trump is based. The memos, which had been circulating in Washington for months, describe sex videos involving prostitutes filmed during a 2013 visit by Trump to a luxury Moscow hotel, supposedly as a potential means for blackmail. They also suggest Russian officials proposed lucrative deals in order to win influence over the real estate magnate.