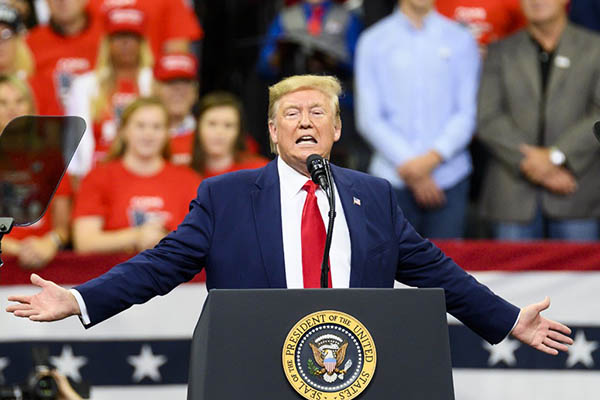 U.S. president claims Democrats are trying to impeach him because they are ‘getting desperate’

An angry, energized President Donald Trump whipped supporters into frenzy on Thursday at a Minneapolis campaign rally where he predicted a 2020 election “backlash” against Democratic attempts to impeach him.

Democrats are investigating Trump for possible impeachment over his alleged bid to pressure Ukraine into digging up dirt on election rival Joe Biden, who currently sits near the top of the Democratic pack. But to roaring cheers and boos from the full-capacity crowd in a basketball arena, Trump put two difficult weeks behind him.

In a speech lasting one hour and 40 minutes, he bathed in supporters’ adulation, hitting all his favorite talking points with a trademark mix of jokes, insults and populist exaggeration. He said Democrats are only trying to impeach him because they’re “getting desperate.”

And in 2020 this will “produce a backlash at the ballot box the likes of which they have never ever seen before.”

The Minnesota city is a liberal bastion in the American heartland, giving Trump a juicy target for his favored rhetoric about a supposed far-left takeover of the United States. Leftist Somali-American congresswoman Ilhan Omar represents Minneapolis, and Trump, who has made Omar a bogey figure among his right-wing supporters, tore into her.

Branding her an “America-hating socialist” and “disgrace to our country,” he boasted about having slashed previous programs to accept refugees into the United States. That got big cheers but not louder than the boos that Trump led like an orchestra conductor against journalists in the arena.

Calling them “crooked writers” and “fakers,” Trump said “they are so dishonest and frankly they are so bad for our country.” He went hard after Biden’s son Hunter. Then for good measure, he lambasted Biden, who was vice president under Barack Obama, saying he’d only been considered a success “because he understood how to kiss Barack Obama’s ass.”

On Friday, Trump will take the “Make America Great Again” show to Louisiana.

Democrats who have been accusing Trump of abusing his office throughout his first term believe they have finally cornered the president with an impeachment probe into his dealings with Ukraine. Trump allegedly pressured new Ukrainian President Volodymr Zelensky to open a corruption probe of Biden and his son.

The president has pushed back hard—refusing to cooperate with the impeachment inquiry—and seeking to turn the entire scandal into a boost for his reelection campaign.

Public support for impeachment is slowly growing, with a new poll from Fox News—a channel favored by U.S. conservatives—showing 51 percent now back his removal from office. “Whoever their Pollster is, they suck,” Trump responded on Twitter.

With control of the lower house of Congress, Democrats are likely to impeach in the coming months, even if few believe the Republican-led Senate will actually convict Trump and force him from office. However, Trump has faced a rare party rebellion this week over his abrupt decision to remove U.S. troops from the Turkish-Syrian border, effectively abandoning Kurds who had fought alongside the United States in Syria to a Turkish assault.

Trump argues that his now infamous July 25 phone call with Zelensky did not feature any kind of pressure, but an innocent proposal for pursuing corruption. He got a boost on Thursday when Zelensky backed his version of events, telling journalists “there was no blackmail.”

Democrats say that given the vast power differential between the two leaders, Trump did not need to make explicit threats and that his request to Zelensky for “a favor” was enough.

On Wednesday, Biden gave a blistering speech in which he called for impeachment, accusing Trump of “shooting holes in the constitution.” On Thursday, two Florida-based businessmen linked to Trump lawyer Rudy Giuliani—who is at the heart of the controversy—were arrested over alleged campaign finance violations.

The pair, Americans born in Ukraine and Belarus, were accused of funneling foreign funds to U.S. political campaigns, including $325,000, which went to a fundraising committee for Trump’s 2020 reelection. Trump, who has been photographed with both men, said he had no idea who they were. “I don’t know about them. I don’t know what they do. I don’t know,” he told reporters.