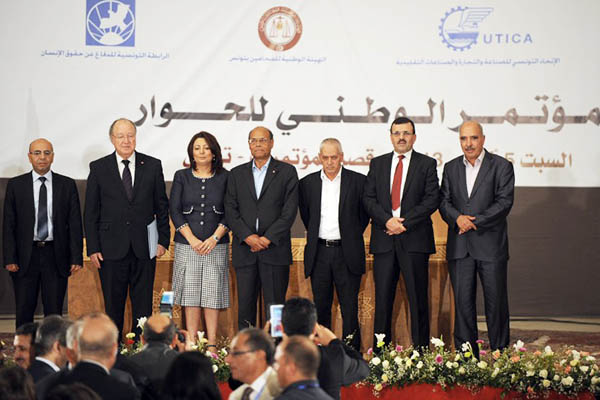 Tunisia’s National Dialogue Quartet won the Nobel Peace Prize on Friday for building democracy in the country after the 2011 revolution, which unleashed the Arab Spring.

The award was given for the quartet’s “decisive contribution to the building of a pluralistic democracy in Tunisia in the wake of the Jasmine Revolution of 2011,” the Nobel panel said. The committee said the prize was also intended as an encouragement to other countries to follow in Tunisia’s footsteps.

“The Norwegian Nobel Committee hopes that this year’s prize will contribute towards safeguarding democracy in Tunisia and be an inspiration to all those who seek to promote peace and democracy in the Middle East, North Africa and the rest of the world,” it said.

The Quartet is made up of four key organizations in the north African country: the Tunisian General Labour Union, the Tunisian Confederation of Industry, Trade and Handicrafts, the Tunisian Human Rights League, and the Tunisian Order of Lawyers.

The organizations represent different sectors and values in Tunisian society, including working life and welfare, principles of the rule of law and human rights. “On this basis, the Quartet exercised its role as a mediator and driving force to advance peaceful democratic development in Tunisia with great moral authority,” the Nobel panel said.

“More than anything, the prize is intended as an encouragement to the Tunisian people, who despite major challenges have laid the groundwork for a national fraternity which the Committee hopes will serve as an example to be followed by other countries.”

The laureates will receive their prizes at a ceremony in Oslo on Dec. 10, the anniversary of the 1896 death of prize creator Alfred Nobel, a Swedish philanthropist and scientist.