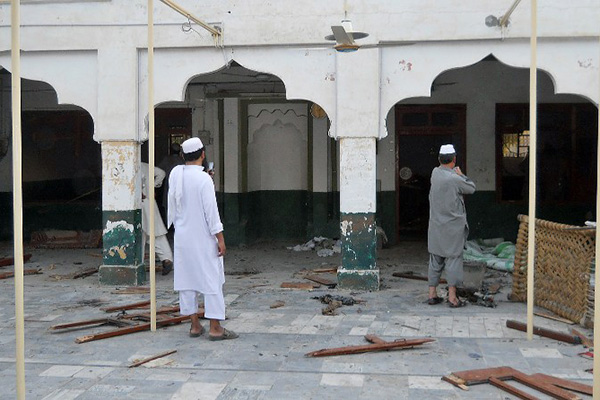 At least 13 people were killed on Friday after remote-controlled bombs detonated outside two mosques in the Baazdara area of Malakand, according to senior local administration official Amjad Ali Khan. “The two blasts killed at least 13 people and wounded 48 others,” he said. “Eight of the injured people are in a critical condition.”

The bombs were detonated by remote control, but information was slow to filter through from the far-flung, mountainous area where there is limited cellphone coverage. Administration official Imran Khan also confirmed the death toll of 13: “One blast took place inside a mosque and the second one occurred at the main gate of the second mosque.”

Survivors said that the bombs exploded as people were leaving the mosques at the end of the weekly Friday sermon.

Iqtidar Khan, 28, said he sustained head injuries. “I came out of mosque after saying prayers when something pulled me with full force,” he said by telephone from hospital after the attack. “A piece of brick hit my head after a big bang. I could see nothing but smoke and blood on the stairs of the mosque,” he added. He said the front gate and the roof on the veranda of the mosque were destroyed by the blasts.

The attack came just one day after the Pakistan Tehreek-e-Insaf party said it was forming a coalition with the rightwing religious Jamaat-e-Islami and the Qaumi Watan Party (Sherpao). “Our province has badly suffered due to terrorism and we need unified efforts to bring peace,” Pervez Khattak, PTI’s nominee for provincial chief minister, told a news conference on Thursday.

PTI emerged as the largest party in Khyber-Pakhtunkhwa by securing 35 out of the 99 directly elected seats in the provincial assembly. JI and QWP secured seven seats each. Its electoral success appears rooted at least in part in Khan’s call for an end to military operations and peace talks with the Taliban.

Friday’s attacks were the deadliest in Pakistan since the May 11 general elections.