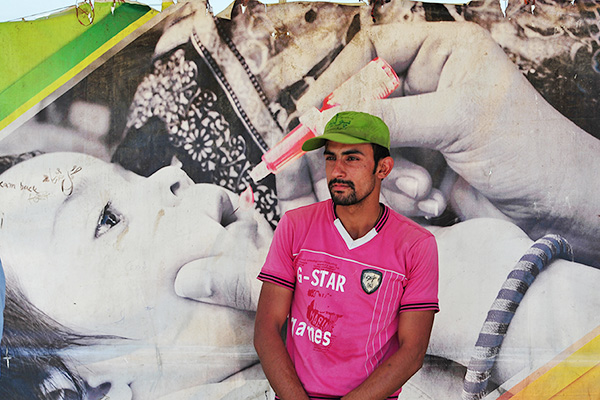 A health worker in front of a banner for polio vaccinations. Farooq Naeem—AFP

Health workers had refused security and were targeted by gunmen in Gadoon.

Gunmen on a motorbike shot dead two health workers participating in an anti-polio drive in northwest Pakistan on Sunday, police said, the latest in a series of deadly attacks on vaccination teams.

The killings took place in the town of Gadoon, some 120 kilometers east of Peshawar, where door-to-door vaccinations had been taking place since Saturday. “Gunmen on a motorcycle shot dead two health workers who were administering anti-polio drops to children in the area,” said district police chief Mian Saeed.

The victims, both male, had refused to take security personnel along, he added.

Last month unidentified gunmen killed a female health worker taking part in a World Health Organization supported anti-polio drive on the edge of Peshawar, near the restive Khyber tribal region where the military has been battling homegrown insurgents with links to the Taliban.

No one has claimed responsibility for the latest killings, but last year the Pakistani Taliban banned polio vaccinations in the tribal region of Waziristan, alleging the campaign was a cover for espionage. Polio teams also came under attack in Karachi and in the northwest last year, with the killing of nine health workers carrying out vaccinations.

Pakistan, Afghanistan, and Nigeria are the only countries where polio is endemic. Polio cases in Pakistan hit 198 in 2011, the highest figure for more than a decade and the most of any country in the world, according to the U.N.