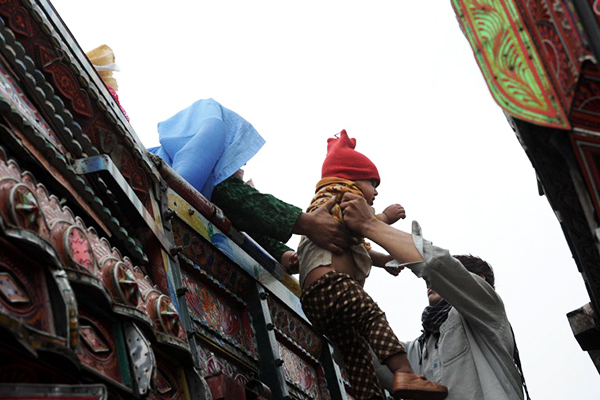 The ongoing Tirah offensive in the federally-administered tribal agency of Khyber against the Taliban and its affiliated Lashkar-e-Islam militia began over a month ago. Since then, at least 126 militants have been killed. Securing the valley is essential to shielding Afghanistan-bound NATO convoys from attacks, and ensuring peace in the provincial capital, Peshawar, on Election Day, May 11.

“In a successful operation, security forces last night captured Kismat Sur and Sanghar, two strongholds of the militants in Tirah valley,” the Army said in a statement. “Sixteen militants were killed in the operation. Two security personnel embraced martyrdom, and three were wounded,” it added. “Militants were seen fleeing from the area, leaving behind a huge cache of arms and ammunition.”

Separately, a roadside bomb targeting a military convoy on Sunday killed two Pakistani soldiers and wounded three more near Razmak, some 45 kilometers south of Miranshah, North Waziristan. A military official in Peshawar confirmed the casualties. “It went off when a convoy of dozens of vehicles was on its way to Bannu,” he said, adding that one vehicle was destroyed. No one has yet claimed responsibility for the blast.

Meanwhile, the United Nations’ Office for the Coordination for Humanitarian Affairs has warned that the fighting in Tirah could swell the number of Pakistan’s internally-displaced persons. “Nearly 76,000 people—about 13,000 families—have been displaced in Tirah valley since mid-March,” said Jens Laerke, an OCHA spokesperson.

“Government officials estimate that more people may leave the conflict-affected area in the near future, bringing the number of internally-displaced to up to 120,000 people,” Laerke said, adding that authorities also estimate that the displaced may remain homeless for up to six months due to the high level of insecurity and uncertainty.

The Office of the U.N. High Commissioner for Refugees has been registering the internally-displaced in its camps. Of the nearly 76,000 people registered, only about eight percent opted to stay in the Jalozai or Kurram agency camps, Laerke said. The remaining 92 percent remain outside of UNHCR-supported camps. “Government authorities, U.N. agencies, and humanitarian partners were already providing basic assistance, but need $25 million to adequately address the needs of the displaced for the remainder of the year,” he said.

Displacement from Pakistan’s tribal areas began in 2008 in the wake of a government crackdown on insurgents. At the height of the displacement crisis in 2009, more than 21,000 families, or around 147,000 people, were registered in the Jalozai camp—the largest of the four camps in the tribal areas for IDPs.