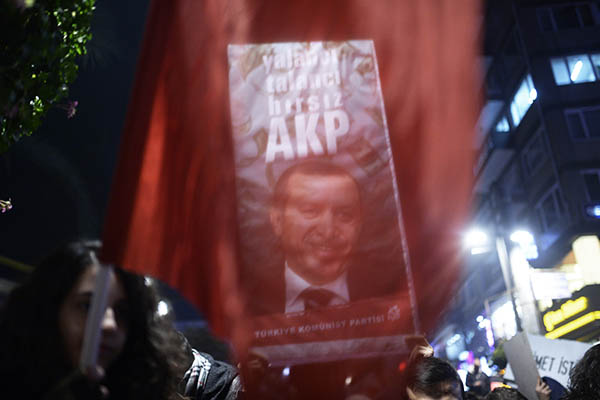 Two Turkish ministers stepped down on Wednesday, the first heads to roll over a massive graft probe that has presented Prime Minister Recep Tayyip Erdogan with the biggest challenge to his 11 years in power.

Economy Minister Zafer Caglayan and Interior Minister Muammer Guler announced their resignations just hours after Erdogan returned from a trip abroad, expected to reshuffle his cabinet. The sons of both ministers are among the two-dozen people who have been charged as part of a high-level bribery and corruption probe that has ensnared close government allies and top businessmen.

Erdogan, who has led Turkey since 2002 as the head of a conservative Islamic-leaning government, has described the probe as “a smear campaign” to undermine Turkey’s ambitions to become a major political and economic power. The political tensions have hit the already slowing Turkish economy, pushing the national currency to hover around record lows against the U.S. dollar.

Erdogan has responded to the investigation by sacking dozens of police chiefs. “We will be patient. We will not fall into traps,” Erdogan told thousands of supporters who flocked to Ankara airport late Tuesday to greet him on his return from an official visit to Pakistan. The Turkish premier held a midnight summit at his Ankara home with some of his ministers including Guler, local media reported.

Caglayan, 56, kept up the government’s defiance in Wednesday’s resignation statement, declaring that the investigation was “clearly a hideous plot against our government, our party and our country.”

“I am stepping down from my post as economy minister so that this ugly game targeting my close colleagues and my son will be spoiled and the truth will be revealed,” Caglayan said. Guler, 64, the interior minister, simply told the state-run Anatolia news agency: “I offered my resignation to the prime minister on Dec. 17 and today I conveyed it in writing.”

Their sons, Baris Guler and Kaan Caglayan, were charged with acting as intermediaries for giving and taking bribes and put under formal arrest on Saturday. Among those released pending trial were the son of a third minister—Environment Minister Erdogan Bayraktar—as well as construction tycoon Ali Agaoglu, and the mayor of Istanbul’s conservative Fatih municipality, Mustafa Demir.

President Abdullah Gul said Tuesday that Erdogan would reshuffle his cabinet following his return from Pakistan. “We have held long talks with the prime minister on ministers … He is making preparations and evaluations,” Gul said.

The leader of the main opposition Republican People’s Party (CHP), Kemal Kilicdaroglu, who urged the government’s resignation as soon as the scandal broke out, called the ministers’ decision to quit as “too late.”

The fast-moving police enquiry has struck at the heart of Turkey’s ruling political elite, as well as the chief executive of state-lender Halkbank, rattling Erdogan’s AKP government, which weathered mass street protests in June. Observers say the wide-ranging investigation has exposed a rift between the AKP government and Fethullah Gulen, a hugely influential Muslim cleric who lives in the United States and whose movement wields considerable influence in Turkey’s police and judiciary.

Cracks have emerged between Erdogan and the Gulen movement over a number of issues including the role of Turkey’s spy agency chief Hakan Fidan but the dispute has burst into public view after government plans to shut down a network of Gulenist schools, a major source of revenue for the group.

“A major political struggle has started in Turkey,” said Soner Cagaptay, director of the Turkish Research Program at The Washington Institute “Ironically, this battle is fought within the ranks of the governing coalition: though not part of the AKP, the Gulen movement had hitherto supported the AKP,” he said.

Gulenists were previously key backers of the AKP, helping it to win three elections in a row since 2002. Gulen has denied the claims that he was involved in the investigation and blasted Erdogan’s purging of police as an attempt to “finish off” his Hizmet (Service) movement.

The scandal has erupted three months before Turkey’s local elections on March 30 that will include a contest for the control of Turkey’s largest city Istanbul and which are now being seen as a key indicator of where the political fault-lines lie throughout the country. The stakes are high for Erdogan. Fast in the tracks of the local polls are presidential elections in August, which for the first time will be open to all voters and in which the still popular premier is expected to participate. Previously the president was elected by parliament.