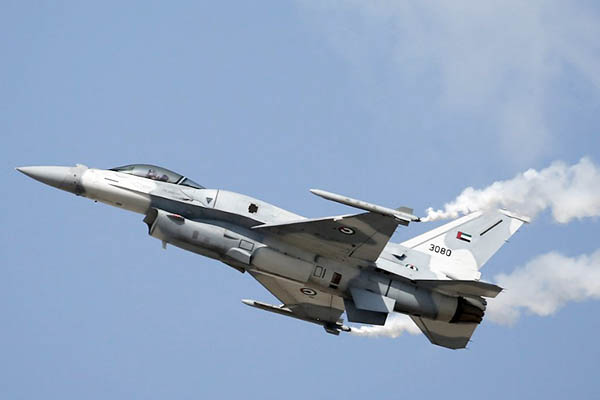 The warplanes will provide support in airstrikes on the Islamic State.

The United Arab Emirates on Saturday ordered a squadron of F-16 warplanes to be stationed in Jordan to support it in strikes against the Islamic State group.

“The initiative … reaffirms the U.A.E.’s unwavering and constant solidarity with Jordan and its leading role and immense sacrifices for the security and stability of the region as embodied by martyr and hero Muath al-Kaseasbeh,” the Jordanian pilot burned alive by I.S., the agency reported.

WAM said the deployment was aimed at supporting Jordan’s military in the fight against “the brutal terrorist organization” I.S., without specifying the number of aircraft involved or their role. It said the jihadist organization “showed all the world its ugliness and violation of all religious and human values through abominable crimes” that caused “outrage and disgust” among Arab peoples.

After Kaseasbeh’s warplane crashed in Syria in December and following his capture by I.S., the U.A.E. withdrew from the U.S.-led coalition’s strike missions over fears for the safety of its pilots. However, a U.S. official said on Friday, after Secretary of State John Kerry met Gulf ministers in Munich, that U.A.E. flights were likely to resume “in a couple of days.”

Abu Dhabi had also “reaffirmed its commitment to the coalition” brought together by the United States to try to defeat the militants who have taken over a swathe of territory in Iraq and Syria. Another U.S. official said that among all the Gulf countries the pilot’s brutal immolation by I.S. “has been a unifying event doubling their resolve to take the fight to Daesh,” using an Arabic acronym for the militant group.