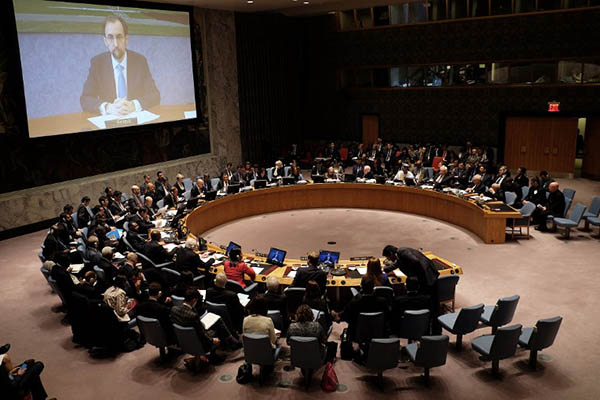 The Red Cross has warned that the world is facing conflict on an “unprecedented” scale, fueled by the international community’s failure to work together to end wars and humanitarian crises.

Dominik Stillhart, director of operations at the International Committee of the Red Cross (ICRC) told AFP the U.N. Security Council was failing in its mission to maintain peace—leading to protracted crises that were escalating into regional conflicts.

Global security is being threatened by an “absence of international convergence in political terms,” Stillhart said in an interview in the Senegalese capital Dakar late on Thursday. “If you look at the Security Council there is today hardly any subject or conflict where [it] comes together and drives a political solution,” he said.

Stillhart described a world caught in a “vicious circle” leading to conflicts that were “more and more protracted and… increasingly regionalized.”

“And you can see that in the Middle East, Syria being a case in point, where today it would even be wrong to talk about the Syrian crisis,” he said. “It is a crisis that is affecting the entire Middle East and Syria is definitely today the worst humanitarian crisis that we are facing, with more than half of the population that have been displaced.”

The 15-member Security Council has been dismissed as “outdated” and “undemocratic” by world leaders including South Africa’s Jacob Zuma, who said in 2013 it “might have by now outlived its usefulness.”

Developing nations have called for reform to the organization, which has since World War II accorded veto rights on substantive resolutions to five permanent members, the United States, Britain, France, Russia, and China. “I use the Security Council as an example of showing how, even at that level, the body that has been created to maintain peace and stability in the world has huge difficulties in coming together around even as serious a conflict as Syria,” Stillhart added.

The result, he said, was that international engagement in crises was focused on humanitarian aid, which he said was a poor substitute for political processes in promoting peace.

The Global Peace Index 2014, published by the Sydney-based Institute for Economics and Peace think tank, showed just 11 of 162 countries representing more than 99 percent of the global population were not involved in conflict of any kind. The study said the world had been getting less peaceful every year since 2008, highlighting tensions in the Ukraine, the Syria conflict, civil war in South Sudan and an increased intensity of terrorist activity as major threats to world peace.

Stillhart questioned whether the Security Council was “really the system that we need to provide peace and security” in a world increasingly influenced by non-state actors including armed militias. “I really don’t know what is the alternative, I’m just observing that the one that we have today has difficulties to do the job for which it was created,” he said.

The Geneva-based ICRC has a mandate to protect victims of armed conflict as part of the International Red Cross and Red Crescent Movement, the largest humanitarian network in the world.