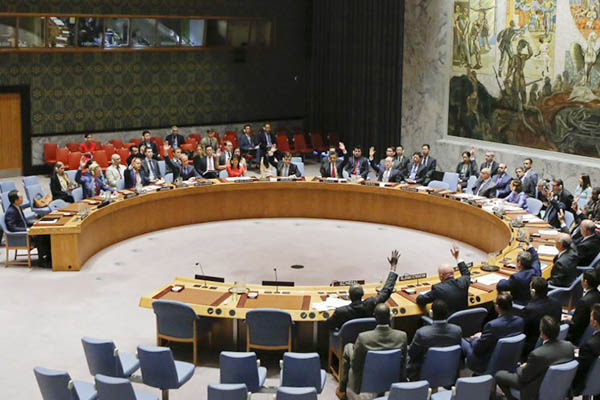 The U.N. Security Council on Saturday unanimously adopted a U.S-drafted resolution that significantly strengthened sanctions on North Korea, with a ban on exports aimed at depriving Pyongyang of $1 billion in annual revenue.

The sweeping measures were the first of that scope to be imposed on North Korea since U.S. President Donald Trump took office and highlighted China’s willingness to punish its Pyongyang ally.

The resolution bans all exports of coal, iron and iron ore, lead and lead ore, as well as fish and seafood by the cash-starved state—stripping North Korea of a third of its export earnings estimated at $3 billion per year. U.S. Ambassador Nikki Haley told the council that the stiffer measures brought the penalty imposed on North Korea “to a whole new level” and put leader Kim Jong-Un “on notice.”

If fully implemented by China and Russia, North Korea’s main economic partners, the measures would tighten the vise around Pyongyang as it seeks to develop its military programs. The resolution also prevents North Korea from increasing the number of workers it sends abroad whose earnings are another source of revenue for Kim’s regime.

The United States entered into negotiations with China a month ago on the new resolution after North Korea launched its first intercontinental ballistic missile on July 4, which was followed by a second test on July 28. But the measure does not provide for cuts to oil deliveries to North Korea as initially proposed by the United States—a move that would have dealt a serious blow to the economy.

The new raft of measures are the seventh set of U.N. sanctions imposed on North Korea since it first carried out a nuclear test in 2006, but these have failed to compel Pyongyang to change its behavior. The United States has put heavy pressure on China, which accounts for 90 percent of trade with North Korea, to enforce the sanctions and the fate of these measures largely hinges on Beijing’s cooperation.

China and Russia had resisted the U.S. push for sanctions, arguing that dialogue with North Korea was the way to persuade Pyongyang to halt its military programs.