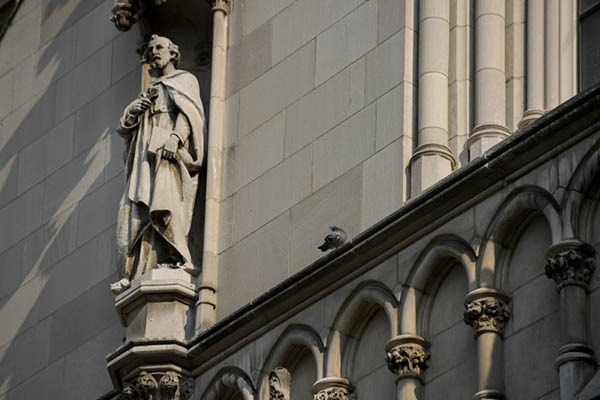 The two-year investigation estimated that the real number of victims was “in the thousands” in Pennsylvania, the most comprehensive report into abuse in the U.S. church that was first exposed in Boston in 2002.

The devastating probe prompted the Vatican to say “victims should know that the pope is on their side,” adding that the church must learn “hard lessons from its past” and improve accountability. But that response followed a period of silence from Pope Francis after the investigation’s release—and harsh criticism from the United States.

“They’re silent and that’s despicable,” said Pennsylvania state Representative Mark Rozzi, who has publicly shared his account of being raped by a priest at 13. “Where’s Pope Francis? You’re the leader of the Catholic Church. Step up, and start making things right for all victims.”

But with most of the culpable priests dead and the vast majority of crimes too old to prosecute, the grand jury recommended changes in the law to make it impossible for such widespread abuse to happen again. They urged the statute of limitations to be scrapped in all cases of child sex abuse, victims to be given more time to file civil lawsuits and laws tightened compelling people to report alleged abuse.

The report has sparked calls for other states to commission similar investigations, compounded pressure on state legislatures to act and on the Catholic Church to take action against bishops.

The so-called Dallas Charter—approved by U.S. Catholic bishops in 2002, after sex abuse was first unearthed in Boston—implemented discipline for abusive priests, but did not extend all the way up to bishops.

“I certainly think there will be new efforts in various states including Pennsylvania to enact changes to the statutes of limitations,” says Michael Moreland, professor of law and religion at Villanova University, a Catholic university in Pennsylvania.

Rozzi wants to give victims another two-year window to sue their abuser or the institution that covered it up, no matter how long ago the abuse happened. “The first part was getting the truth out and the second part is getting justice and for dramatic change,” the Democrat told AFP.

He wants the criminal statute of limitations eliminated altogether for any child abused under the age of 18 and to change the law to give victims a two-year “window of opportunity” to file a civil lawsuit.

If analysts say the Dallas Charter had some success in stopping sexual abuse in the church and disciplining priests who were involved, critics now say it doesn’t go far enough where bishops are concerned. “I do think there will be pressure coming from within the church, including from the Vatican itself to hold these bishops to account,” said Moreland. “Whether or not that happens I think is uncertain.”

This summer Chile has been investigating 158 members of the country’s Catholic Church for perpetrating or concealing the sexual abuse of 266 victims, including 178 children and adolescents. The entire Chilean delegation of bishops tendered its resignation to the pope in May after a series of meetings at the Vatican, but Francis has so far accepted the resignation of only five Chilean bishops.

Between 5,700 and 10,000 priests have been accused of sexual abuse in the United States, but only a few hundred have been tried, convicted, and sentenced, according to the watchdog Bishop Accountability.

Since the abuse crisis became public in the 2000s, the U.S. church has spent more than $3 billion in settlements, according to Bishop Accountability.

Lisa Fullam, professor of moral theology at the University of Santa Clara, also wants to see the church leadership start to take seriously how to hold their fellow U.S. bishops accountable. “This is a church-wide problem,” she told AFP. “It’s not a local problem, it’s a national, a world-wide problem, what’s different in different places is the extent to which it has been exposed so far.”