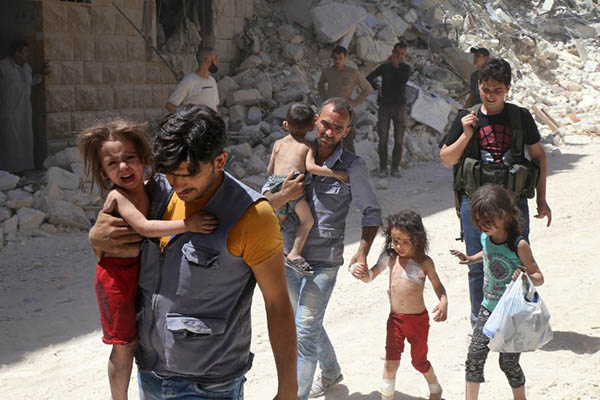 White House spokesman says Russia must use its influence over Syria to ensure aid convoys can enter besieged towns.

The United States accused Syria on Thursday of blocking aid to besieged cities and warned it will not boost military cooperation with Russia unless Damascus honors a truce agreement.

President Barack Obama’s spokesman Josh Earnest said Russia is responsible for ensuring that its ally Syrian leader Bashar al-Assad allows United Nations convoys to enter towns like Aleppo. “Right now, the trucks that could bring them life-saving assistance are idling on the wrong side of the border,” Earnest told reporters. “And that’s the direct responsibility of the Assad regime and their benefactors in Moscow.”

Separately, Pentagon spokesman Peter Cook warned that unless Russia is able to convince Assad both to halt attacks on rebel groups and allow humanitarian access, military cooperation would not happen.

Last week, U.S. Secretary of State John Kerry and Russia’s Foreign Minister Sergei Lavrov agreed to pressure Syria’s warring parties to stop fighting and allow in aid. Russia was to convince Assad to accept the deal, while America was responsible for dealing with a coalition of opposition rebel groups.

Once Washington and Moscow can jointly agree that a ceasefire has held for seven consecutive days, they are to open a joint cell to coordinate U.S.-Russian strikes on jihadist groups.

The truce came into effect at nightfall on Monday, but State Department spokesman Mark Toner refused to be drawn on how many days of ceasefire have elapsed or when cooperation could begin. “Certainly we’re not there yet,” he said. “We’re not there and we’re not claiming to be there.”

There have been reports that the U.S. Defense Department is more skeptical of the deal with Russia than is Kerry’s State Department, and Cook warned the terms are not yet met. “We’ve said that there would need to be the sustained period with the reduction in violence, with the terms that would need to be complied with,” Cook said. “And we haven’t seen that yet,” he said, stressing the need for aid to move freely. “So there will be no military coordination until those terms have been met.”

Toner said there had been breaches of the ceasefire by both sides in the conflict and, more worryingly, Assad’s forces have not allowed U.N. aid convoys through.

Kerry and Lavrov did not speak on Thursday, he added, but “it continues to be our assessment that this is worth pursuing. It’s worth continuing.”

Washington has not released the full text of its agreement with Russia to the frustration of observers and now allies like France, which has complained about the secrecy.

Toner insisted that U.S. allies would be briefed in detail on the deal during meetings on the sidelines of the United Nations General Assembly in New York next week. But the spokesman said the text of the agreement deals with “sensitive issues” and could be “misused or misinterpreted” by “would-be spoilers” opposed to the agreement. “Also it could put some of these opposition groups, moderate opposition groups at risk,” Toner said.

The spokesman did not elaborate, but reports suggest the agreement describes the location of U.S.-backed rebel groups and could expose them to attack from rival factions.