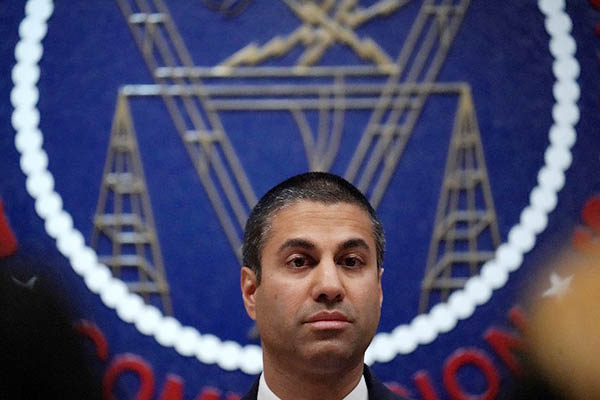 Adopted in a three-to-two vote, the controversial move is already facing legal action in court

The Federal Communications Commission, in a three-to-two vote, adopted a proposal by Republican-appointed chairman Ajit Pai, who said his plan would scrap “heavy-handed” rules adopted in 2015, which he argued discouraged investment and innovation.

The vote capped a heated partisan debate and is just the latest in a battle over more than a decade on rules governing internet service providers in the courts and the FCC.

Democratic member Mignon Clyburn, one of the two dissenters, charged that the agency was “handing the keys to the internet” to “a handful of multibillion dollar corporations.”

Immediately following the vote, officials from two states and others vowed to challenge the FCC action in court.

Net neutrality activists have staged a series of protests in cities around the U.S. and online, amid fears that dominant broadband providers could change how the internet works. “Chairman Pai has given internet service providers an explicit license to block, slow, or levy tolls on content,” said Ferras Vinh of the Center for Democracy & Technology, a digital rights group.

Vinh said internet providers “will now have even greater power to shape the online experiences of internet users, at the expense of consumers and small companies.”

Net neutrality backers have argued that clear rules are needed to prevent internet service providers from blocking or throttling services or websites for competitive reasons. Some activists fear internet service providers will seek to extract higher fees from services that are heavy data users, like Netflix or other streaming services, with these costs passed on to consumers, but new startups without the resources of major companies would be more likely to feel the pain.

Critics of the 2015 net neutrality rule counter that it was based on utility-style regulation designed for 1930s telephone companies, not a dynamic internet market.

Pai said ahead of the vote that his plan would restore “light-touch” rules, which allowed the internet to flourish, and promote investments to enable new and emerging services. “The digital world bears no resemblance to a water pipe or electric line or sewer,” Pai said in a session briefly halted over an undisclosed security threat. “Entrepreneurs and innovators guided the internet far better than the heavy hand of government.”

Pai said removing neutrality rules is key to investment to develop newer “next generation” services such as telemedicine or autonomous driving. “When there’s less investment, that means fewer next-generation networks are built,” he said. “And that means more Americans are left on the wrong side of the digital divide.”

Appointed by President Donald Trump, Pai was a fierce critic of the neutrality rules adopted under former president Barack Obama in 2015 and earlier this month unveiled his plan named the “Restoring Internet Freedom” order.

Many Republican lawmakers backed Pai, although a few had urged the FCC to delay the vote to allow Congress time to consider legislation.

Within minutes of the vote, the attorneys general of New York State and Washington State vowed to challenge the FCC in court. “The FCC just gave Big Telecom an early Christmas present, by giving internet service providers yet another way to put corporate profits over consumers,” New York Attorney General Eric Schneiderman said.

Others planned legal challenges including the consumer activist group Free Press. “We’ll have plenty to say in court about the legal mistakes littered throughout this decision,” said Free Press spokesman Matt Wood.

Democratic Senator Ed Markey said he would ask lawmakers for a regulatory review to overturn what he called the FCC’s “misguided and partisan decision” in order to “keep the internet in the hands of the people.”

Pai and internet firms have maintained that internet users will see no difference once the new rules are implemented. Commission member Michael O’Rielly dismissed “fear-mongering” by neutrality backers.

“The internet has functioned without net neutrality rules far longer than with them,” he said.

Michael Powell, a former FCC chair under Republican president George W. Bush who now heads a lobby group for major internet firms, cautioned against panic. “Time will prove that the FCC did not destroy the internet, and our digital lives will go on just as they have for years,” said Powell of the NCTA—The Internet & Television Association. But Ed Black of the Computer & Communications Industry Association, which represents major tech firms such as Google and Facebook, said internet users should be wary of such promises.

“It’s not realistic to think that these companies would spend many millions lobbying for the FCC to agree to abdicate its authority to protect open internet rules—and then not use their market power to recoup that money from customers,” Black said.