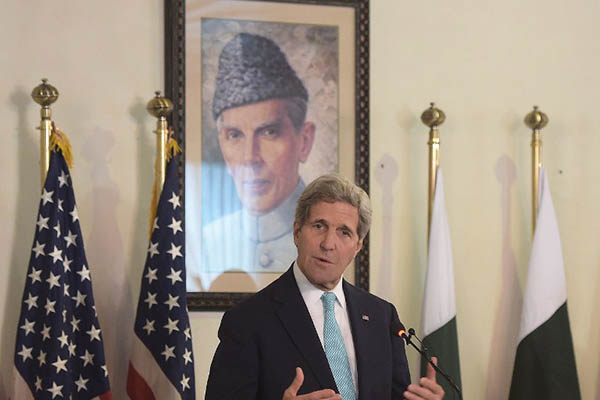 Secretary of State says militant groups such as Pakistani Taliban pose threat to the world.

The United States is set to boost its security and intelligence cooperation with Pakistan to step up its offensive against Islamist militants, Secretary of State John Kerry said Tuesday.

“I emphasized that the U.S. is committed to deepening our security relationship with Pakistan in order to eliminate threats in the border area and elsewhere,” Kerry told reporters. He was addressing a joint press conference with Pakistan’s national security advisor Sartaj Aziz as the two countries held strategic talks on the direction of future ties.

In the wake of last month’s Taliban attack on a Peshawar school which killed 150 people, mostly children, Pakistan has moved against militant groups sheltering in its unruly tribal areas. “The tragedy of Dec. 16 is really a reminder of the serious risk of allowing extremists to find space, and be able to command that space and operate within it,” Kerry said.

He said all militant groups such as the Pakistani and Afghan Taliban, the Haqqani network and Lashkar-e-Taiba “continue to pose a threat not just to Pakistan and its neighbors but also to the United States and the world.”

“Make no mistake the task is a difficult one and it is not done,” Kerry said. “We all have a responsibility to ensure that these extremists are no longer able to secure a foothold in this country or elsewhere.”

The relation between America and Pakistan is very complicated since our independence . we dont have an independent, and balanced foreign policy. U can notice the seriousness of our present government that even our govt has not appointed minister for foreign affairs yet and the only solution is Sartaj Aziz .why ? John Kerry s dictation is very clear note the difference .have a look at his address in India and Pakistan . America is playing double game with Pakistan, for this super power India has become favorite nation and Kerry talked about many economic ties with India , but on the other hand he urged Pakistan to overcome terrorism …..why dont America notice violation of human rights in occupied Kashmir , unbearable behavior with Muslim community in India ? are all the western countries blind ?/