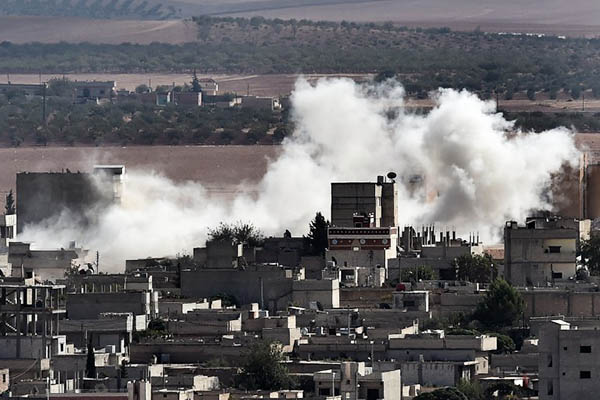 Extremist group continues to make gains in Iraq and Syria, with observers predicting a long war ahead.

A year after Islamic State jihadists overran much of Iraq, the United States and its allies are struggling to turn the tide against the extremists and their self-declared “caliphate.”

As it tries to lead an unwieldy international coalition, Washington has pleaded for patience but has yet to arrive at a successful formula that can cripple the well-funded, opportunistic jihadists in Iraq and Syria. President Barack Obama’s strategy—a combination of U.S.-led air power with advice and weapons for local forces—was supposed to stop the onslaught and buy time for an eventual push to roll back the jihadists. There have been some modest victories, including in the defense of the besieged northern Syrian town of Kobane and most recently in Tikrit, north of Baghdad. But the I.S. group shows no sign of weakening and has seized yet more territory in recent weeks.

“Realistically our strategy is to contain ISIL right now,” said David Barno, a retired general who once led the U.S. war effort in Afghanistan. “And I don’t think we’re succeeding at that.” The jihadists have no shortage of money, weapons or recruits and they have proven brutally savvy about exploiting the Sunni-Shia sectarian divide plaguing Iraq and the region. “This is an organization that’s on the move. It’s got momentum. It’s building,” said Barno, now based at American University. “All the conditions for it to expand are present.”

The I.S. group’s capture of Ramadi in Iraq’s Anbar province last month—against a larger foe backed by the world’s most powerful air force—represented a stunning defeat for the Iraqi army and the U.S.-led coalition’s campaign.

But despite the rout, Obama has made clear he is sticking with his strategy—one that rules out any ground combat for American soldiers.

To help the Iraqis retake Ramadi, the U.S. president this week approved the deployment of dozens of military advisers to Anbar. Critics and political opponents dismissed the move as a half-measure doomed to fail.

The administration’s approach amounts to “creeping incrementalism,” said Anthony Cordesman of the Center for Strategic and International Studies, an outspoken skeptic of Obama’s war plan.

The fall of Ramadi has fueled calls for a more aggressive battle plan that would involve American special forces sent to the front to guide Iraqi units and air raids, a larger-scale air war that could risk killing more civilians and a more assertive stance on the conflict in Syria. Air power advocates have blasted the current operation as overly cautious, citing a statistic that roughly 75 percent of all warplanes return from strike missions without dropping a bomb. And they say sortie numbers were much higher in previous conflicts, such as the 2001 intervention that toppled the Taliban in Afghanistan.

“We are using pinprick air power with pinprick results in Iraq and in Syria,” said Barno. In eastern Syria, where I.S. runs its operations, “we need to think about a more concentrated campaign to crack them where they are essentially in a sanctuary now for all intents and purposes,” he said.

The chief of the French army agreed. “In Libya we went after [Libyan dictator Muammer] Qaddafi’s centers of gravity… it was by attacking these centers that we managed to topple Qaddafi, not by firing at 150 pick-up trucks a day,” said General Denis Mercier. “Otherwise we would still be there.”

Top U.S. commanders, however, have warned against unleashing air power without constraints, fearing that killing large numbers of civilians could play into the I.S. group’s propaganda. And Obama has repeatedly insisted that while the United States can provide support and airstrikes, the war in the end has to be won by local forces—not Americans.

“American power can make a decisive difference, but we cannot do for Iraqis what they must do for themselves, nor can we take the place of Arab partners in securing their region,” Obama said in September.

U.S. officials openly acknowledge there is no end in sight to the war, and that the next commander-in-chief will have to grapple with the I.S. threat that is now spreading to Libya. Even if Obama opted for escalating the air war, the fight against I.S. could still founder in the face of a sectarian rift paralyzing the Iraqi army and a widening power vacuum in Syria, experts said.

It will be a challenge merely to “hold the line” against the I.S. because the group will continue to feed off the chaos in Syria and the splintering of Iraq, wrote Aaron David Miller, a former senior diplomat who served under previous U.S. presidents. “But defeating ISIS is for now an unattainable objective—one to ponder during the long war to come.”