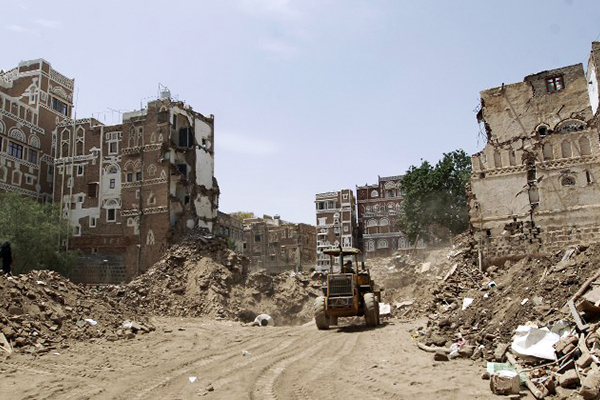 UNESCO said Sana’a, known for its many Islamic sites and multi-story rammed earth houses, “sustained serious damage due to armed conflict” between Iran-backed rebels and the beleaguered Saudi-supported government.

UNESCO is meeting through July 8 in Bonn, where it will consider at least 36 natural and cultural sites vying to get World Heritage status.

The 12th century al-Mahdi Mosque has also been affected and “the majority of the colorful, decorated doors and window panes characteristic of the city’s domestic architecture have been shattered or damaged,” it said.

The old city of Sana’a has been inhabited for more than 2,500 years and was a major center for the propagation of Islam, boasting more than 100 mosques, 14 public baths and more than 6,000 houses built before the 11th century.

UNESCO’s World Heritage Committee also decided that the old walled city of Shibam was “under potential threat from the armed conflict.” The fighting “compounds safeguarding and management problems already observed,” it said as it added the 16th-century city to its List of World Heritage in Danger. Shibam’s tower-like structures rise up from a cliff and have given the city the nickname of the “Manhattan of the desert.”

The U.N. on Wednesday declared its highest level of humanitarian emergency in impoverished Yemen, where more than 2,600 people have been killed since March.

Meanwhile, the Islamic State militant group has destroyed a famous statue of a lion outside the museum in the Syrian city of Palmyra, the country’s antiquities director said Thursday.

Maamoun Abdelkarim said the statue, known as the Lion of Al-Lat, was an irreplaceable piece and was apparently destroyed last week. “I.S. members on Saturday destroyed the Lion of al-Lat, which is a unique piece that is 10-feet tall and weighs 15 tons,” said Abdelkarim. “It’s the most serious crime they have committed against Palmyra’s heritage.”

The limestone statue was discovered in 1977 by a Polish archeological mission at the temple of Al-Lat, a pre-Islamic Arabian goddess, and dated back to the 1st century BC.

Abdelkarim said the statue had been covered with a metal plate and sandbags to protect it from fighting “but we never imagined that I.S. would come to the town to destroy it.”

I.S. captured Palmyra, a renowned UNESCO World Heritage site, from government forces on May 21, prompting international concerns about the fate of the city’s antiquities. So far, the city’s most famous sites have been left intact, though there are reports I.S. has mined them. Most of the pieces in the city’s museum were evacuated by antiquities staff before I.S. arrived, though the group has blown up several historic Muslim graves in recent weeks.

Also on Thursday, the group released photos showing its members in Aleppo destroying several statues from Palmyra that were being smuggled through the northern province.

“An I.S. checkpoint in Wilyat [region of] Aleppo arrested a person transporting several statues from Palmyra,” the group said in an online statement. “The guilty party was taken to an Islamic court in the town of Minbej, where it was decided that the trafficker would be punished and the statues destroyed.” The statement included photos showing several carved busts being destroyed with sledgehammers.

Abdelkarim said the busts “appear to be eight statues stolen from the tombs in Palmyra.” He added: “The destruction is worse than the theft because they cannot be recovered.”

On Wednesday, the head of UNESCO urged a campaign against I.S.’s “culture cleansing.”

“Extremists don’t destroy heritage as a collateral damage, they target it systematically to strike societies at their core,” Irina Bokova said in a speech at the Chatham House think tank in London. “This strategy seeks to destroy identities by eliminating heritage and cultural markers.”