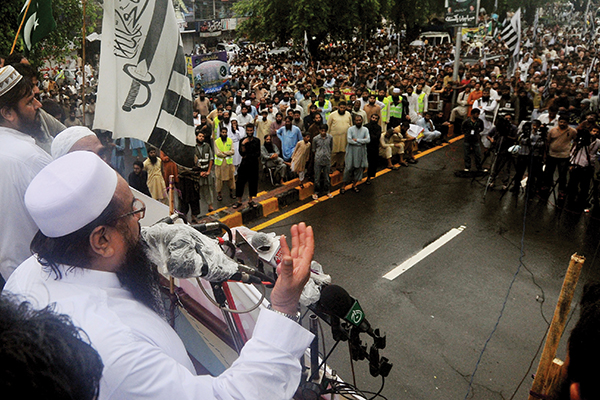 Indian news channels have declared war on Pakistan, again. Ever since New Delhi claimed Pakistanis in Army uniform killed five Indian troops across the Line of Control in India-administered Kashmir earlier this month, following a series of such incidents since January, Indian airwaves have been seething with fury. But it’s not just the talking heads. In recent days, mobs have ransacked the PIA office in the Indian capital and attacked an exhibition of Pakistani artists in Ahmedabad, which is ruled by the Hindu rightwing BJP, whose taunts to Prime Minister Manmohan Singh have also worked. On India’s Independence Day, Aug. 15, the amiable Singh issued a terse warning to Pakistan against any “anti-India activity.” A day earlier, his Pakistani counterpart, peacenik Nawaz Sharif, had vowed to address the deteriorating situation with India with “restraint and responsibility.” But that same day—Pakistan’s Independence Day—Lashkar-e-Taiba cofounder Hafiz Saeed spoke at an anti-India rally at Lahore’s Gaddafi Stadium, fulminating against the neighboring country, which accuses him of having masterminded the Mumbai attacks of 2008. It is widely believed that Saeed, who the U.S. also views as a terrorist, has a deniable relationship with Pakistan’s intelligence agencies. His rollout in Lahore was viewed here and abroad as a signal that Sharif’s restraint-and-responsibility mantra may not hold.