‘Vote for Abrar If You Want Your Daughters to Be Dancers’ 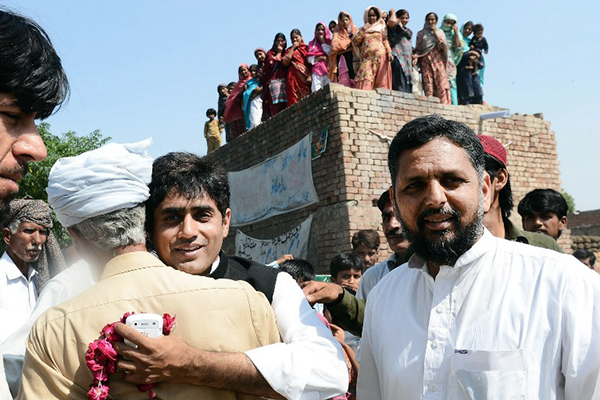 In a quiet corner of the Punjab, a parliamentary candidate lets his music do the talking.

Abrar-ul-Haq, a pop star famous for a string of upbeat Punjabi hits, is mobbed by children in every village he stops at and garlanded, as drummers strike up a Bhangra rhythm and brightly-decorated white horses are made to dance.

Considered to have only an outside chance of winning a seat, the 43-year-old hopes his music and message of change can unseat an incumbent in the semirural area of Narowal who has won three times. He leans into his microphone and urges his noisy followers at a campaign stop to be silent, before breaking into a soulful song on motherhood, a common theme in Punjabi folk music, designed to tug at the heartstrings of his audience. “It is a reference to my mother, whose death inspired me to build my hospital here,” said Haq, who is running for the National Assembly from Imran Khan’s Pakistan Tehreek-e-Insaf party, referring to the Sughra Shafi Medical Complex.

Haq shares much in common with his leader, Pakistan’s most famous cricketer who has galvanized young people and the middle class with his message of change and reform. Both have contributed heavily to charity, with the majority of patients visiting Haq’s hospital admitted for free or a discounted fee—and both have leveraged their celebrity to run for office.

Ahsan Iqbal of the Pakistan Muslim League (Nawaz), Haq’s major rival, is a formidable opponent. But Haq is confident of making a breakthrough for his party in what he says would be a triumph for “new” politics based on effective and corruption-free management over traditional bloc-voting. “People here are not satisfied with their performance—they were not getting anything done despite being in power for five years,” he says.

The PML-N ruled Punjab province and was in opposition at a national level.

“Even without being elected, we have done more for the area with our social work, which is there for everyone to see. Of course, a lot of the support is because of Imran Khan’s overall popularity,” says Haq. He points to the pockmarked roads and the fact the district is the only one in the Punjab not connected to the gas grid as symptoms of neglect by an incumbent who was more preoccupied, he says, with federal ambitions than his constituency.

Still, he faces an uphill battle. Best known for his hits, Haq’s opponents are using the lyrics from some of his more racy numbers to question his morality in the deeply religious region. “Vote for Abrar if you want your daughters to be dancers,” reads one flyer distributed in the district written by critics, a play on the title of his song “Dance Punjabi Girl.”

Haq counters that he has also written music that explores spirituality and Sufi mysticism, adding “even long-bearded conservative men tell me they love my music.” He adds: “It is wrong to think music and intelligence cannot exist side by side.” Haq is a law graduate, who taught geography at Aitchison College in the 1990s.

Some of his supporters agree. Mohammed Naeem, a 42-year-old shopkeeper, said: “I have voted for Ahsan Iqbal in every election he stood in. But the roads he built are already breaking down and this time I will vote for Abrar because of his social work.” Others such as Arshad Masih, a 32-year-old Christian farm laborer, have different reasons for their support. “We’re voting for him because he is new. Our hope is they will do better for Christians,” he says.

If Haq does achieve an upset victory, sympathy for Khan, who suffered injuries after falling from a stage on Tuesday, could play a part. “Imran Khan bravely addressed the nation from his hospital bed with a head injury. Now you too must be brave and vote for a new Pakistan,” Haq told supporters.

PML NAWAZ IS ALREADY TESTED AND PROVED A FAILURE FOR PAKISTAN. WE FEEL PTI UNDER THE GUIDANCE OF MR IMRAN KHAN WILL PROVE BETTER FOR INDEPENDENT PAKISTAN

I wish Mr Iqbal has used his considerable expertise in doing something good for the country.

@wajid .. So a Wharton Business School graduate has racial supremecy over a Pakistani degree. Ahsan Iqbal’s strategic planning and thinking is already evident. It is time for a new Pakistan. These aristocrats and feudals have ruled us plenty. Its time for the middle class to rise.

PML-N is already tested … I just wanted to ask the supporters of PML-N and all Pakistani Nation …. What If PML-N makes collation government with Zardari ?? what will be their opinion about Nawaz Sharif and PML-N then??

And our Vote is just for Captain, and Insha Allah we will win and we will see … What ever the result of this election, Ultimately PTI will be the winner … DEKH LENA 🙂