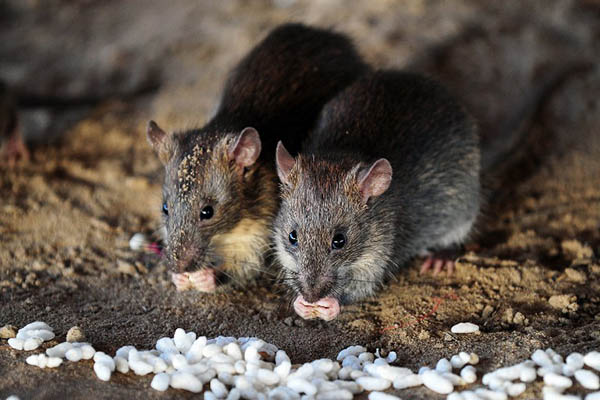 The provincial capital of Khyber-Pakhtunkhwa has become a city of rats and residents are demanding government action.

Irum, a resident of Peshawar, was half-asleep one listless night last month when she felt something crawling on her foot. Panicked, she kicked out, hoping to dislodge the intruder. Instead, she felt a sharp pain and let out a cry of anguish. Irum’s elderly mother rushed to her side, turning on the lights, and pulling back the covers to see what was wrong. It was a rat; Irum had become the latest victim of the rodents swarming the Khyber-Pakhtunkhwa capital.

“We live in fear every night,” says the 29-year-old teacher. “Where are the condemnations or at least words of support from Imran Khan? Is this the Naya Pakistan he had promised? If so, I’d like the old Pakistan back.”

Local residents say the rats, reportedly up to 12 inches long, are making life miserable in the provincial capital. The rodents are gnawing on everything in sight, from food to clothes—and even humans. The largest population of rats is found in the city’s older, congested areas, they say, with decrepit houses built in the 1920s being popular breeding grounds.

Officials at Peshawar’s main Lady Reading Hospital confirmed to Newsweek cases of rat bites have skyrocketed in recent months, with up to 25 people showing up daily for treatment. “The total number of patients bitten by rats has crossed 515,” Jameel Shah, official hospital spokesman, told Newsweek. “Most of the patients are young children or women with almost all of them being bitten during the night,” he said.

Rats can carry a wide number of diseases, including hantavirus, leptospirosis, rat-bite fever, and salmonellosis. They are also associated with the deadly rabies virus although cases of rats transmitting the disease to humans are very rare. As a safety measure, all victims are administered the rabies vaccine, says Shah, adding there are fears of vaccination shortages if the situation does not improve.

A senior official of Lady Reading Hospital, speaking on condition of anonymity because he is not authorized to speak to media, said they had attempted to inform the government of the impending threat earlier this year. “Lack of planning for development projects appears to be the primary cause for this pest problem,” he says. “Older houses, which have been neglected for decades, are ideal breeding grounds for rats and government inaction is making the situation worse,” he added.

The government, however, denies it is ignoring the ongoing crisis. Earlier this year, the local district government announced a head money of Rs. 25 for every dead rat, though in some areas—notably the military-controlled Cantonment—the bounty went up to Rs. 300. At the time, Local Government and Rural Development Minister Inayatullah Khan told media a committee has been formed to find the root cause of the infestation and draw up plans for their “complete elimination.” He also confirmed reports that at least five babies had died in the past three years due to rat bites.

But two weeks after this announcement, the government withdrew the head money, claiming their initiative was being ‘ridiculed.’ Police also arrested a man for bringing—from neighboring Punjab province—at least 100 dead rats for reimbursement. The responsibility for eradicating the pests was then given to the Water and Sanitation Services Peshawar, a public limited company fully owned by the Government of Khyber-Pakhtunkhwa.

A representative of Peshawar Nazim (mayor) Mohammad Asim Khan told Newsweek the provincial government had decided to consolidate all health and sanitation efforts under WSSP. This decision has come under scrutiny in recent weeks, with local government staff in Peshawar’s Union Councils claiming the government is refusing to release any development funds to them. Protesters have also alleged they are not being granted the authority enshrined to them under the Local Government Act of 2013.

“The WSSP has been plagued with a staff shortage almost from its outset. The government should have assigned this task to local government representatives—they would be far more likely to resolve this crisis,” says one critic who is a senior official at the Union Council-level. The WSSP rubbishes these criticisms, claiming it has already rid Peshawar of thousands of rats.

Taimur Khan, the official spokesman of the WSSP, says the organization has tasked over 30 people to the rat eradication campaign across Peshawar. “We have rid the city of at least 8,700 rats so far,” he says, adding that staff is being paid overtime to encourage them to tackle the challenge on war footing.

Khan said the WSSP was prioritizing the older areas of the city that had forwarded the most rodent complaints and was trying to outsmart the “intelligent” animals. “We keep switching the type of food we poison, because once a rat dies, other members of its colony avoid that type of food for some time. We’re not promising this will be over soon, but in a few months you will see results,” he added, encouraging affected residents to forward any sightings to the WSSP complaint cell for timely action.

But while the WSSP and local government bodies struggle to cope with the ongoing crisis, the elected officials in the provincial parliament seem to consider the problem beneath them. The response of lawmakers has alternated between blaming their political rivals for the crisis to dismissing it as ‘unimportant.’

In late March, when reports of the epidemic started circulating on local media, minister Inayatullah Khan alleged the “giant rats were brought to Peshawar in containers from elsewhere to create this issue.” He followed this bizarre claim by accusing the Health Department of failing to do its job by eradicating the rodents, prompting the Health minister to question how his ministry could simultaneously be responsible for administering poison to rats and medicine to humans.

Similarly, Minister Shah Farman, a member of the ruling Pakistan Tehreek-e-Insaf, has blamed the rodent problem on the previous government. “We are not responsible for this. Rats can live up to 7 or 8 years and if the previous regimes had focused on this, there would be no problem,” he told media earlier this year. “There are far greater issues for the media to focus on,” he added.

Farman is wrong. Rats live an average of 12 months to 2 years. His dismissive attitude toward a problem facing the largest city of his province is also disheartening, say residents. “Maintaining public health is a basic responsibility of the government,” says Naseem Khan, a 43-year-old, shopkeeper. “Two of my sons were bitten by rats. What should I tell them? Blame the [previous government of] Awami National Party?”

Another resident Pervez Shah said there were numerous reasons for the rats’ proliferation, ranging from floods driving the pests out of the drainage system and improper garbage removal. “We know the problems. Where are the solutions? If the government cannot solve a ‘minor’ issue like this, why should we trust them to solve the bigger ones?”

Shah warned the PTI-led government to resolve the people’s complaints or risk being voted out of office. “Khyber-Pakhtunkhwa has a history of never giving second chances to political parties that let them down. Please don’t let this history repeat,” he said.

Shopkeeper Khan, meanwhile, said he was appreciative of the PTI’s efforts to rid the country of corruption through mass rallies and protests, but wondered why similar energy was not devoted to protecting his family. “Imran Khan should raise his voice against corruption but what about us? My children told me about the story of Pied Piper. Today, the people of Peshawar need a Pied Piper to rid us of this menace.”