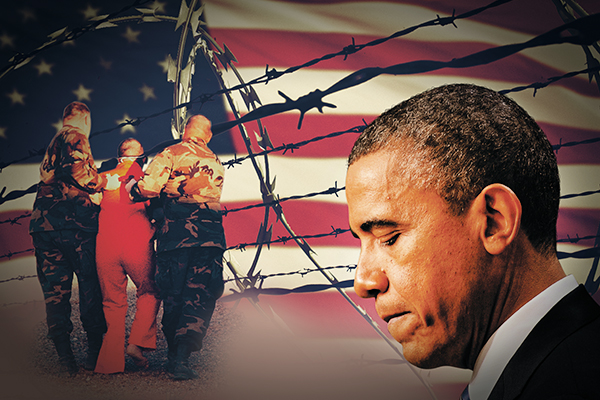 The White House said Thursday that if Congress blocks new plans to close the notorious Guantanamo Bay prison, President Barack Obama may resort to a controversial executive order to get the job done.

With time running out for the 44th president to fulfill an incomplete election campaign promise, he looks increasingly likely to bypass lawmakers who have blocked the facility’s closure. “I’m certainly not going to take anything off the table,” White House spokesman Josh Earnest said when asked about possible executive action. He said Obama would do “everything that he can to make progress” toward Guantanamo’s closure, which Earnest described as a “national security priority.”

Obama is expected within days to put forward a plan to Congress that would allow Guantanamo to close. Created to hold terror suspects after the September 11, 2001 attacks, Guantanamo became notorious for harsh interrogation techniques and because many prisoners are, or were, held for years without being charged. As of now, the facility is home to 112 inmates.

The new closure proposal, drafted by Obama’s top counterterror adviser, Lisa Monaco, and Defense Secretary Ash Carter would lift congressional restrictions on transferring detainees to the United States. Inmates who cannot be released or transferred abroad would be housed at a U.S. facility like Fort Leavenworth, Kansas or the Navy Brig in Charleston, South Carolina.

But that plan looks increasingly unlikely to pass muster in the Republican controlled Congress, raising the prospect of executive action, which would ignite a political firestorm.

In 2009 Obama issued an executive order to close the camp, prompting a furious Congress to pass rules that made the transfer of detainees to U.S. soil all but impossible. The White House has long said those rules are unconstitutional as they impinge on executive power. But it has tried to have them overturned rather than engage in a damaging political fight.

In a sign of the anger that unilateral action might provoke, Republican Senator Pat Roberts said Wednesday he would block the nomination of any Obama government appointee if the White House moves ahead. “I currently have a hold on the president’s nominee for the Secretary of the Army. And I will place holds on any nominee necessary to prevent this unilateral action,” said Roberts. “Congress has consistently stopped Obama by law from moving a single detainee to the U.S., and this would be an egregious overstep by the administration ignoring the will of the American people to accomplish the president’s legacy goals.”

But Obama has argued that indefinite detention, “enhanced interrogation” and images of detainees in orange jump suits violated America’s ethos and handed militants a potent recruiting tool. Closing Guantanamo “has always been the president’s goal and remains a high priority,” a senior administration official told AFP. “Leaders from across the president’s national security team are energized and engaged in these efforts to responsibly close the detention facility at Guantanamo.”

Stephen Vladeck, a law professor at American University, said it is now “a question of just how much political capital the President is willing to spend.”

“It may well be that he is willing to take the political hit and that the legacy costs of not closing Guantanamo are starting to dwarf the political costs of closing it,” Vladeck said. “He’s going to antagonize Republicans in Congress. I suspect they are going to use it as justification for increasing obstructionism and intransigence on everything from nominations to basic legislation.”