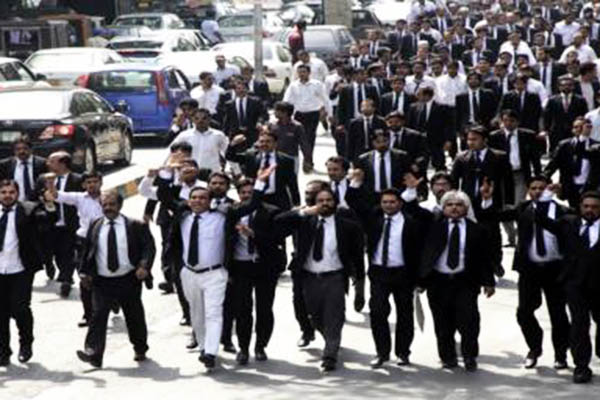 Breaking the law in the name of restoring law and order isn’t the answer.

So, the lawyers in Punjab have gone berserk protesting the highhandedness of the police in Daska. They think the police broke the law by killing two of their confraternity. Apparently, they believe that in forcing the authorities to go by the law they need to break the law. This is their equivalent of ‘creative destruction’.

But let’s first go back to the legal-normative.

Corollary: you can beat up policemen, officers of the law, when you want to, but you must invoke the law when the police retaliate with excessive force. And while you want invocation of the law through protests, the protests can involve rioting, beating up of reporters and passersby and whoever else falls foul of your anger.

Consider the circumstances, as reported. [NB: the information purely depends on that which has been reported and the writer does not claim to have firsthand knowledge of events.]

The lawyers were protesting against the record-keeper of the Daska Tehsil Municipal Administration for ‘misbehaving’ with a lawyer. One thing led to another, as it usually does when it involves two important elements of the criminal justice system, namely, the police and the lawyers. The lawyers beat up some policemen. The police fired ‘straight’ and killed two lawyers while a third and a passerby are injured and are critical.

All hell has since broken loose. Lawyers are protesting across the major cities of Punjab, breaking bones and infrastructure and mocking the law they represent and argue, and which they ostensibly want to restore in this particular case until another incident angers them.

How does one account for these non-sequiturs? Can they even be explained or understood in and through the legal-normative framework?

I do not know the legal sections and clauses but one thing is clear. One cannot attack a state functionary, especially one in uniform. Two, what situation would call for the police to shoot, and shoot straight?

These questions of course presuppose a discussion within the legal-normative framework. I am not too sure, given attitudes on all sides in this society, if employing that framework will help us understand the situation. Let me say that the illogic of breaking the law but invoking it when it suits us is on display in every aspect of our social life. We are all guilty of indulging in it to varying degrees. We see it on the roads, in our social interactions and in our behavior toward the state. It reflects, to quote Alexis de Tocqueville, a near-breakdown of the “art of associating”.

This is not the first time lawyers have acted in this way. Hooliganism among the black coats is now an established and entrenched trait of the community. But let no one misconstrue the idea of community in its modern forms. The lawyers are a biradari, a tribe. Their instincts are primal and their idea of law is not grounded in any legal theory. It is firmly about their in-group interests. It’s a worldview where they will do everything possible, within or outside the ambit of law, to establish and perpetuate their superiority and safeguard their interests.

Once we use this framework, we can begin to understand the ‘logic’ behind the illogic and the loutish behavior on display. Ditto for the cops. They too are tribal and armed with the legal and coercive power of the state. Their use of excessive force flows from that as well as, in many cases, from pure lack of capacity to use modern crowd-control and management strategies.

But once again I slip into modernity and the whole enchilada that comes with the concept and I must apologize for that. A situation of tribal passions cannot be discussed, much less understood through modern concepts and categories.

So, instead, I will try and recreate that moment in Daska.

Lawyers protest a petty administration official’s poor behavior with one of the confraternity. They become threatening and violent. The police tries to control them. The lawyers beat up the police. The police’s tribalism also kicks into play. There is a standoff. Given this situation unfolding in the heart of Punjab, one can be sure that the language used will be multi-flavored and colorful. One could also be sure of the presence on both sides of multiple Sultan Rahis and Mustafa Qureshis. We are told the lawyers started challenging the police to fire at them if “you have the courage”. I can put it in neat Punjabi but then this outlet will have to censor the sentence in the interest of probity. The police says, “tuhadi…” and then opens fire. The rest, as they say, is partly history and presently unfolding.

Now, what part of this scenario can be understood through modern, evolved, civilized concepts?

And yet, the “law” and a lot of politics are now on display. The very categories the two sides have rubbished in the process are now being invoked and also destroyed on the Mall in Lahore—all in the name of restoring law, order and normalcy. The irony is both delicious and disturbing because it is not just about an incident but about our entire societal existence and our woeful lack of understanding of the law. Welcome to the fusion cuisine of medievalism and modernity.