Home Lightbox Will the General Hang?

Will the General Hang? 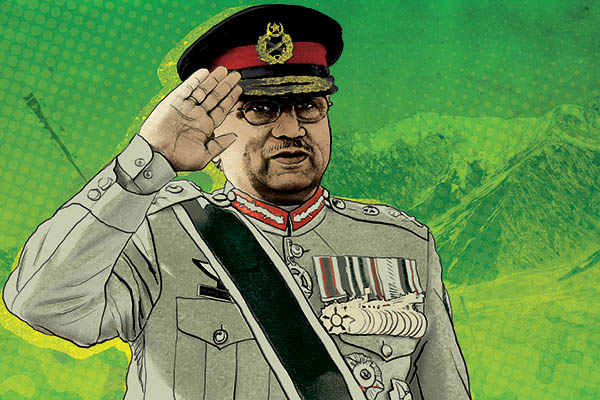 On Dec. 19, 2019, a three-judge special court delivered a split 2-1 written judgment sentencing to death Gen. (retd.) Pervez Musharraf, who in 2007 had violated the Constitution and stream-rolled the judiciary when he found judges unwilling to support the government he had formed after a coup in 1999. Out of the three, one judge, Peshawar High Court Chief Justice Waqar Ahmed Seth authored the judgment but marred it by inserting a paragraph asking the government to lynch Musharraf in public even after he has died a natural death.

Justice Seth must be counted among Pakistani judges traumatized by the way the judiciary has been mauled into submission by Pakistani dictators. The government of Imran Khan has decided to get rid of the judge by challenging his sanity at the Supreme Judicial Council. This ouster would invalidate the judgment, after which Musharraf will go free. Once a sworn enemy of Musharraf, Prime Minister Imran Khan is today no longer interested in punishing him given the fact that the Pakistan Army has condemned the conviction—and it is no secret that the PTI-led government and the armed forces are currently simpatico.

Prime Minister Nawaz Sharif, whom Musharraf overthrew in 1999, chose him as his Army chief because he looked “liberal,” which he was to regret later. The breaking point came with the Kargil war, which Musharraf unleashed, saying the prime minister had okayed it. Taking place between May and July 1999, the conflict was a disaster for Pakistan. But rather than face punishment for his failings, its planner-executioner General Musharraf staged a coup against the democratically elected government in October 1999, grabbing the reins of power for nearly a decade.

Prime Minister Nawaz Sharif couldn’t have acquiesced in the “Kargil Operation” because when it was initiated he was receiving his Indian counterpart Atal Bihari Vajpayee in Lahore in what appeared to the world to be the final reconciliation between India and Pakistan. General Musharraf, in fact, was embarrassed meeting Vajpayee while his troops were attacking the Indian positions in Kargil. Later, Vajpayee was to observe that his trip to Lahore had been “a stab in the back.”

Benazir Bhutto was also assassinated on Musharraf’s watch. On the run from an anti-terrorism court in Pakistan, Musharraf swore he didn’t kill her but that “rogue elements within the Army” might have. The fact was, the same Army hated him after the choices he made in 2001. 9/11 had just happened. Musharraf, ruling a cash-strapped country, lunged at the opportunity to join the “international war” in Afghanistan that President George W. Bush was about to wage with a Chapter Seven U.N. General Assembly resolution in his pocket. Musharraf’s “Islamic” Army didn’t like it—mega-Islamist General Hamid Gul called him an “American surrogate”—and certain elements tried to kill him twice.

He was also seen by Musharraf-hating elements within the Army as doing worse than that—that is, getting cozy with India. An Air Force officer who was ideologically aligned with the banned Jaish-e-Mohammed, Adnan Rashid, tried to kill the former Army chief for this, but was caught and imprisoned in Adiala Jail in Rawalpindi. Unsurprisingly, other rogues in the Army got him transferred to the faraway border town of Bannu from where he was “sprung” by Al Qaeda and led by another “rogue”—Ilyas Kashmiri—who got him to break into a Dera Ismail Khan jail and free some terrorists, which he did, till he was brought down by an American drone. In a camp in Mansehra, near Abbottabad, where Osama bin Laden was living with the help of more Army “rogues,” many “regulars” were trained as terrorists.

Pakistanis who abhorred extremism springing from the Islamization of the-now predominantly middle-class Army didn’t mind his “enlightenment”; but the judges—running into scores—who had been mauled by him in the process of his self-legitimization hated his guts. The case brought against him for treason in November 2007 languished because of the “protection” offered him by subsequent Army chiefs—Generals Ashfaq Parvez Kayani and Raheel Sharif—the latter also getting him to leave for Dubai despite his name being on the Exit Control List at the time. President Bush also pitched in by “requesting” Dubai and Saudi Arabia to contribute $2 million each to permit him to live well.

In the coming year, General Musharraf will not hang. And if he dies a natural death, which is likely given his obvious poor health, his body will be brought back to Pakistan with some fanfare, and he will be buried in the country he had “served well for 40 years.”

The judicial ruling is not to blame, the ISPR reflecting the will of the generals to maintain a caste system in Pakistan between civil-military is. Posthumous punishment is required to end caste system, Justice Seth knows that. Remember, generals can’t protect his grave 24/7 when he’s buried

Somewhere between the lines all Pakistanis need to read that the Kargil war was in fact initiated by Pakistan and not India. That India’s then PM Vajpayee was in fact back stabbed for his effort at peace with Pakistan. These facts have been vehemently denied by Pakistan’s establishment and the general Pakistani people. Does it take a decade for Pakistan to look back and realize what just happened. Article 370 was still in existence back then, but Pakistan still had to initiate Kargil. The hatred to India existed irrespective of article 370 or not. Any excuse to hate India is what is being preached and expected of a true Pakistani. This article shows the tremendous losses suffered by Pakistan due to the misadventures of this mindset. India is not the reason for your sufferings, its your hatred to India that is causing this.