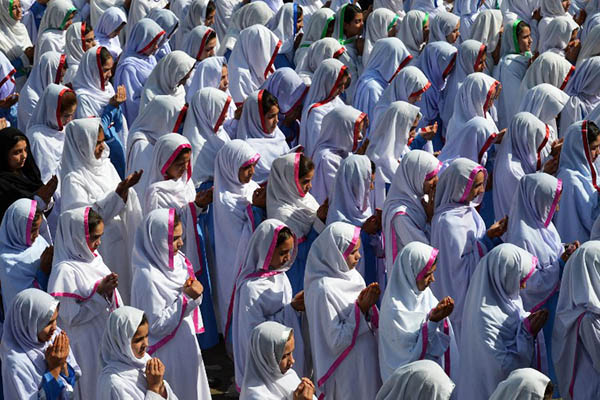 Students pray for Malala Yousafzai after her Nobel win. A. Majeed—AFP

Women across Pakistan find inspiration in Malala’s story, with many pledging to return to school and hoping for change in society.

Saima Bibi was just 13 when she was married off to settle a debt of honor, a common custom in Swat, where Nobel Peace Prize winner Malala Yousafzai grew up. A top student who got the highest marks in class, Bibi was forced to drop out of school and give up her dreams of an education. Now aged 22, she says Malala has given her the courage to speak up to her husband and in-laws to try to go back to school, and is determined her four children will finish their studies.

“When Malala’s picture was being printed in the newspapers, everybody in my family used to say it’s a conspiracy against Islam. But I liked her from the beginning,” she said on a visit to the doctor in Mingora, Swat’s main town.

Though derided by some for sullying Pakistan’s reputation abroad, Malala’s award has been widely hailed by the country’s political leaders and the press. It has also cast a spotlight on the abysmal rates of educational enrolment and literacy for children, especially girls.

While the 17-year-old campaigner was forced to leave her country after being shot in the head by Taliban gunmen two years ago, millions of other children miss out on schooling because they are more valuable to their families begging, working in fields, or married for dowry. The Taliban razed hundreds of schools when they ruled Swat from 2007 to 2009 and while the militants have mostly been pushed back into hideouts in Pakistan’s tribal areas, problems remain.

Some 25 million children aged from five to 16 in Pakistan are out of school, 14 million of them girls, according to Alif Ailaan, an education campaign group.

Sumera Khan said she too was forced to drop out after eighth grade—not because of marriage but for a lack of schools where she grew up. “I was fond of studying but … there were no middle and secondary level schools for girls in my village,” the 21-year-old said in Mingora, as she prepared dinner at home while her two children played on the floor.

“My family did not allow me to continue education with boys in higher classes,” she added. Khan also said she was inspired by Malala.

“She gave me courage to resume my studies and now I am planning to study privately … I will raise my voice for myself like Malala.”

Official figures show 69 percent of boys and 44 percent of girls are enrolled in primary schools in Swat, figures that drop to just five and two percent by the time they pass middle school aged 14 and enter secondary education—broadly mirroring national trends.

Iffat Nasir, a senior education official, said the majority of girls dropped out around the age of 13 to get married, while it is difficult for students in rural areas to access education. “There is poverty in the region, so the girls start embroidery and tailoring work after primary school,” she said. “Families also use them for domestic labor.”

Such issues are by no means restricted to Swat or the country’s insurgency-wracked northwest, with chronic underinvestment leading to around 7,000 “ghost schools” where buildings stand but no classes are taught. Classes may also not occur because of a lack of teachers.

Girls who are able to overcome the odds are often reliant on a strong male figure, like Malala’s father Ziauddin Yousafzai, to battle hostility from within their family.

Fazeelat Akbar, a 32-year-old doctor, said she hoped Malala’s success would help more men change their minds. “I forced my family to let me continue my education after high school. I was determined to continue my studies and luckily my father backed me,” she said.

Observers have hoped the goodwill surrounding Malala’s Nobel win can be leveraged to improve the fortunes of all school children, but many are pessimistic. “I don’t think [the government] will have a wake-up call and go ‘Oh gosh Malala won the Nobel now we have to make this a priority,’” said feminist writer Bina Shah. “They will say that ‘It is nice, we are proud of her’ and they are going to go back to doing the same thing.”

Back at the clinic, AFP asked Saima Bibi’s husband Javed Alam what he made of her plans to finish her schooling. “I am thinking about it, and I will let her know,” he said.