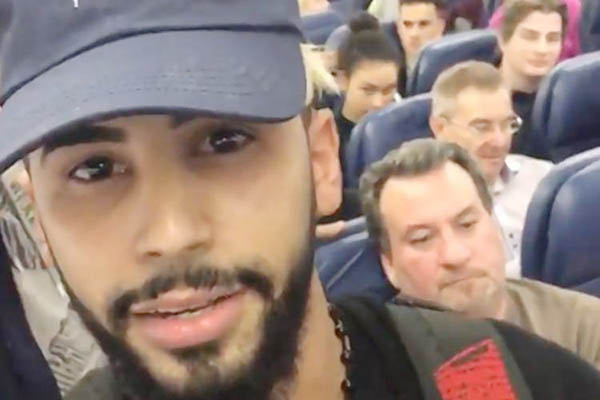 Airline claims Yemeni-American and his friend were removed over a ‘disturbance.’

A Yemeni-American YouTube star from New York called for a boycott of Delta Airlines after charging he was removed from one of its flights for speaking Arabic.

“We spoke a different language on the plane, and now we’re getting kicked out,” the 23-year-old prankster, who has more than 2.2 million YouTube followers, said in a video filmed as the incident unfolded, and posted on Twitter. Saleh said he had been talking to his mother on the phone when fellow passengers complained, and he was told to leave.

Several passengers could be seen voicing their support for Saleh, with one calling out the airline staff in protest, but others at the rear of the aircraft seemed to approve, waving him off and saying “Good Bye.”

After an hours-long delay involving more security checks, Saleh said he was finally able to board a flight to New York with a different airline—and would head straight to see his lawyer.

Saleh’s video had been ReTweeted more than 700,000 times by Wednesday evening, and the hashtag #BoycottDelta—which he included in a subsequent tweet—was trending on Twitter.

It was the latest of several cases in the past year in which passengers have run into trouble on American flights for speaking Arabic—or in one case, for writing mathematical equations passengers mistook for Arabic.

In a statement, the airline said crew and passenger statements after the incident indicated that Saleh and Albaher “sought to disrupt the cabin with provocative behavior, including shouting.”

“While one, according to media reports, is a known prankster who was video recorded and encouraged by his traveling companion, what is paramount to Delta is the safety and comfort of our passengers and employees,” it added. “It is clear these individuals sought to violate that priority.”

Delta said earlier it was investigating allegations of discrimination. The airline declined to provide further comment when contacted by AFP.

Last month, the company banned for life a man who had loudly expressed support for president-elect Donald Trump on a flight from Atlanta to Allentown, Pennsylvania.

Saleh’s YouTube site posts videos of hidden-camera scenarios and other pranks. “Yes we’re pranksters and it sounds like the boy who cried wolf,” he tweeted Wednesday night, “but today you can see its as real as it gets.”