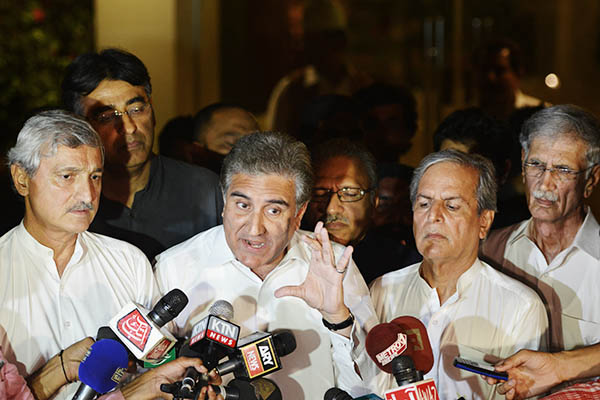 Opposition parties demand P.M. Sharif resign as government claims that is ‘out of the question.’

Cricketer-turned-politician Imran Khan and populist cleric Tahir-ul-Qadri have led thousands of supporters demonstrating outside the legislature this week calling for Sharif to go. The standoff has raised fears of possible military intervention in the country, which has seen three coups since its creation in 1947.

In a bid to muster political capital against the protests, Sharif has turned to his rival Zardari, the husband of slain prime minister Benazir Bhutto and the political supremo of the opposition Pakistan Peoples Party (PPP). Zardari flew in from Dubai on Friday evening and held talks with Sharif in Lahore on Saturday.

Zardari threw his weight behind the continuation of the present Parliament saying democracy “should not be derailed,” a rebuke to the protest movement aimed at unseating Pakistan’s premier.

“Political forces should solve their problems within themselves through talks,” Zardari told reporters after his meetings with Sharif, senior leaders of the Jamaat-e-Islami and leaders of the Pakistan Muslim League. “I am for Pakistan not anybody else. I am for the Parliament,” he added.

But Zardari called on Sharif to continue negotiating with the protesters. “I have requested the Prime Minister to keep patience and handle the situation politically,” he said. “The solution is dialogue, dialogue and dialogue. Democracy means never shutting the door. Differences can be removed through dialogue.”

Khan insists the May 2013 general elections, which swept Sharif to power in a landslide, were rigged and therefore the prime minister should step down, though observers rated the vote free and credible.

Qadri and Khan’s protest movements are not formally allied and have different goals, beyond toppling the government. But their combined pressure—and numbers—have given extra heft to the rallies. But if one group were to reach a settlement with the government and withdraw, the other’s position would be significantly weakened.

The government, meanwhile, has insisted Sharif will not resign. “Whatever the solution is, it should be within Constitution and law. Prime Minister’s resignation is out of [the] question,” Finance Minister Ishaq Dar said Saturday.

But the ongoing talks have failed to offer a quick solution. Representatives from both the government and Khan’s Pakistan Tehreek-e-Insaf (PTI) party told reporters after the latest meeting that they could not agree on the basic demand of the prime minister’s resignation.

In an attempt to trigger a raft of by-elections, the PTI—the third largest party in the National Assembly—has submitted resignation letters for their 34 lawmakers. The letters will be opened and verified Monday, speaker Ayaz Sadiq told Geo television.

The ongoing political paralysis has led to fears Pakistan’s Army may step in. Analysts say the Army is more likely to use the crisis to assert influence behind the scenes than stage an outright power grab.

But if a full-blown coup d’etat looks unlikely, especially as such a move could jeopardize billions of dollars in foreign assistance and trade deals, analysts say the crisis will leave Sharif weakened.