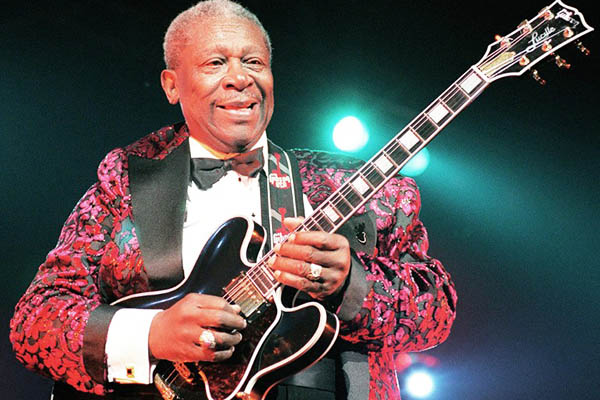 The ‘King of Blues’ fell ill in October last year, prior to which he was performing up to 300 concerts annually.

B. B. King, with his ever-present guitar Lucille, rose from sharecropper poverty in deep Mississippi to become the face of the American blues worldwide and an inspiration for generations of rock guitarists everywhere. ‘The King of the Blues,’ as he was universally known, led a life of non-stop touring, electrifying audiences in some 100 countries with his biting guitar licks and soulful songs of love and angst such as “The Thrill is Gone” and “How Blue Can You Get.”

King died Thursday at age 89 in Las Vegas, which was the blues legend’s primary residence amid years of incessant travel, his daughter said. King kept up a grueling touring schedule even in his 80s, despite living with Type II diabetes for more than two decades. But King’s fans noticed last year that some performances were increasingly erratic, and he canceled remaining dates in October after falling ill at a show in Chicago.

A consummate entertainer with a husky baritone who made a successful crossover from traditional African American audiences to rock and pop fans, King for decades gave upwards of 300 concerts a year, racking up 14 Grammy awards. “I have a disease which I believe might be contagious,” he said in an interview in 2007. “It’s called ‘need more.’”

Almost as well known was his “woman,” the Gibson ES-355 guitar he named Lucille, after a woman who was the focus of a fight between two men in Arkansas that led to a house being set on fire and King nearly being burned to death as he tried to rescue his instrument. Through Lucille he delivered an unmistakable mix of slow but sharp bites and long, moaning bends that influenced other guitar legends such as Eric Clapton, George Harrison and Stevie Ray Vaughan.

In 2003, Rolling Stone magazine ranked him the third greatest guitar legend after Jimi Hendrix and Duane Allman and one ahead of Clapton. But his influence probably eclipsed all of theirs.

Riley B. King was born Sept. 16, 1925, on a cotton plantation in Itta Bena, Mississippi. His father left home when he was five, he was working in the fields at seven, and his mother died when he was nine. A kindly white plantation owner bought him a red guitar when he was 12, and, as he moved up to driving a tractor on the farm, he spent his spare time singing in local Gospel groups and on street corners for spare change.

Eventually he made his way north to Memphis, Tennessee, a music capital which was to become his longtime base. Blues legend Sonny Boy Williamson put King on his radio show, where he made such an impression the young musician soon got his own program, Sepia Swing Club. On the radio he took the nickname Beal Street Blues Boy, then shortened it to Blues Boy King, and then B. B. King.

In 1949 he made his first six singles, and two years later hit pay-dirt with “Three O’Clock Blues.” It held the number one slot on the national rhythm and blues charts for 15 weeks.

He told interviewers he had always wanted to sing Gospel music, but it was blues that brought in money. He developed his distinct style in the 1950s as he toured incessantly with his band. Charismatic, a natural entertainer, he wove stories from the poor south with tales and jokes from his love life, in between cracking blues numbers backed by a phalanx of Memphis horns.

His guitar playing focused not on speedy riffs, not on sweeping chords, but well-chosen, sharp single notes and long, aching bends. He never took up the slide guitar like most Delta bluesmen, but substituted with a vibrato from his left hand on the neck that rounded out his unique sound. “By bending the strings, by trilling my hand—and I have big, fat hands—I could achieve something that approximated a vocal vibrato,” King said in his 1996 autobiography.

It made King’s blues, and for many, it became the essential sound of all blues.

By the early 1960s, however, King’s music lost its popularity with the rise of more slick R&B styles. But within a few years he would have a new audience: young, white and hip.

In 1968 he was invited to perform at San Francisco’s Fillmore West, the mecca of hippie folk and acid rock. “It was the first time I ever got a standing ovation in my life. It was so touching that I cried. Big grown man crying,” he later said.

In 1969 the Rolling Stones invited King to open 18 U.S. concerts, and his new career was launched. “When you mention the Rolling Stones, I get on my knees,” King told the Los Angeles Times in 2005. “Because before them, we didn’t get the [recognition] that we do now.”

In 1970 he had his biggest-ever hit, the slow-moving, minor-key “The Thrill is Gone,” which took him for the first time onto the well-monied pop charts. It became one of his two signature songs. The other was the show-stopping “How Blue Can You Get.” Knowing audiences would roar at the first words: “I’ve been downhearted baby/ever since the day we met.”

King later added the title “Ambassador for the Blues,” as the U.S. government sent him around the world for concerts, including a triumphant 1979 tour of Russia.

His family life, as biographer Charles Sawyer wrote, was “never normal by ordinary standards.” He told people that when his regular dates with Lucille came between him and a woman, the guitar always won. He was married and divorced twice, and liked to say he had 15 children by 15 women, but was very closed-mouth about any details. People magazine reported he had eight children. At least two of his children worked with his band, one as a backup singer.

Patty King, considered the youngest of his daughters, took charge of his care at the end of his life and reportedly fought with King’s longtime manager.

B. B. King later regretted that he did not hear the blues too much on the radio. “So one of the reasons I travel a lot is so I can carry the music to the people. Because if I don’t carry it, it don’t go on the air,” he said in 2007.

B. B. King also lent his name to a string of blues clubs and restaurants, with the first opening in Memphis in 1991, although he did not focus on the day-to-day operations.

King made his 42nd and last studio album in 2008, One Kind Favor, that also brought him his final Grammy. He recorded the Grammy winning “Riding With the King” with Clapton in 2000: the cover showed Clapton in the front seat of an open limousine chauffeuring a regal King together with Lucille in the back—an uncontestable hierarchy.