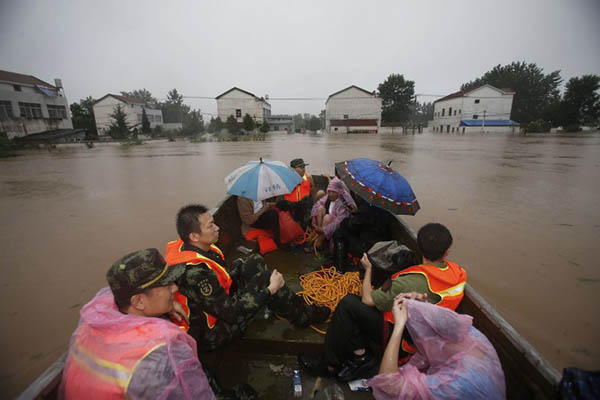 Flooding in China’s Yangtze river basin has left 112 people dead or missing in recent days, media said on Tuesday, with more damage feared from a typhoon expected to land within days.

Some 16 million people have been affected by heavy rains that have left vast areas under water near the Yangtze, China’s longest river, the Beijing News cited the civil affairs ministry as saying.

Water levels in Taihu Lake, close to Shanghai, are at their highest level since 1954, it said, adding the area faced a “serious” risk of flooding if a typhoon hit nearby on Friday.

Pictures of a farmer in eastern China breaking down in tears as waters mounted around his 6,000 pigs were posted by state media. Other images showed a sports stadium in the central province of Hubei turned into a “giant bathtub” by the rainfall.

Flooding is common during the summer monsoon season in southern China, but rainfall has been particularly heavy this year and many areas have been lashed by torrential rains this week. Rain is expected to move north this week towards the Huai river, the Beijing News added.

China’s Vice Premier Wang Yang warned last month that a strong El Nino effect this year would increase the risk of floods in the Yangtze and Huai river basins.

An El Nino effect was linked to China’s worst floods of recent years when more than 4,000 people died in 1998, mostly around the Yangtze. The paper quoted a meteorologist as saying that rain patterns this year were more disparate than in 1998, diminishing the risk of a similar toll.

China’s national observatory issued an orange alert for storms across the country’s south and east last week—the second highest warning in a four-tiered system. Whole villages were leveled and at least 98 killed in the eastern province of Jiangsu last month after the region was hit by a storm with hurricane-force winds and the worst tornado in half a century.

Floods have also hit South Asia this week, with 33 killed in Pakistan and 25 left dead in India after unusually heavy rains.