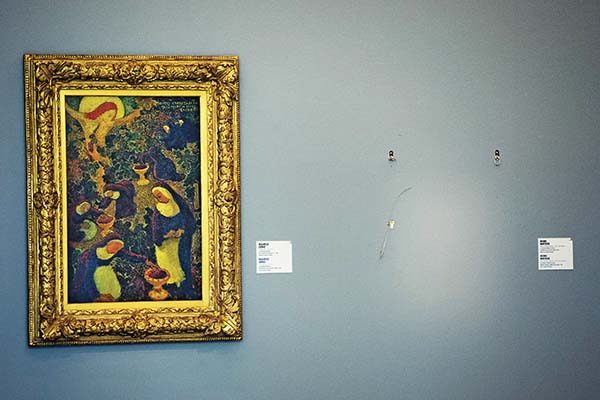 An empty space at the Kunsthal where a Matisse used to hang. Robin Utrecht—AFP

The new art of the heist.

[dropcap]M[/dropcap]arc Bertoldi shouldn’t have been driving such a flashy set of wheels. The four-door Porsche Panamera exudes excess, even if you’re supposed to be a high-end used-car salesman. And that pile of euros worth $100,000 that he’s alleged to have had with him and which he couldn’t quite explain: that’s the kind of thing police tend to regard as incriminating. But the cops were onto him anyway.

Bertoldi was wanted by authorities in Belgium for his alleged role in one of the great diamond heists in recent memory. On Feb. 18, eight armed men dressed as cops with their faces covered drove through a hole in the fence at Brussels’ Zaventem airport. They surrounded a Helvetic Airways passenger plane at the precise moment after packages full of diamonds, cut and uncut, had been transferred from an armored car into the cargo compartment for a flight to Zurich. In less than three minutes they made off with the whole shipment, valued at roughly $50 million. Nobody was hurt, and the people on the plane didn’t even know what happened.

The Brussels job was just one in a series of spectacular thefts in recent months. Last October, masterpieces of modern art by Picasso, Monet, Matisse, and others were stolen from a museum in Rotterdam: estimated price tag in the initial reports, as much as $125 million. And early this month the federal attorney in Brooklyn brought charges against a gang involved with coordinated hits on automatic teller machines across 26 countries from the United States and Romania to Egypt and Japan that scored a stunning $45 million in cold, hard cash.

There’s no unifying conspiracy behind these operations, certainly. But there are definite trends. All relied to some extent on the blind spots in high-tech security systems. All required precision timing. And it’s clear there’s a hierarchy of heists. Art theft gets huge publicity but iffy returns, and gems make sense for thieves who know where to sell them, but cash, without question, is king.

In every one of these cases, arrests have been made, but in every one, if you look closely, the people facing jail time are implausible masterminds at best, and some just look like fools. The brains behind the operations almost certainly are still out there and so, by the way, is most of the loot.

‘There is always an idiot who uses the phone to call his cousin in Naples or order a pizza.’

It’s the great cliché of great heists that at least one member of the crew is going to run off at the mouth. “People talk,” says Robert Wittman, a former undercover agent tracking art thieves for the FBI. “When people talk, you get information, and the next thing you know you’ve got evidence, and that is when people get caught.” But in many cases, most notably the theft of Rembrandts and other masterpieces from the Isabella Stewart Gardner Museum in Boston 23 years ago, nobody reliable talks and the rumors never lead to recovery. Indeed, as Wittman points out, there’s a good chance the artwork gets damaged or destroyed if it’s not returned quickly.

In many cases, the criminals are tripped up when their tradecraft fails. Cellphone records have developed into powerful tools for police investigations of everything from petty larceny to kidnappings and high-profile assassinations. (One way the cops tracked down the alleged Boston Marathon bombers was by tracing an iPhone left in the car they hijacked.)

So the smarter gangs use what are called “burners,” or prepaid cellphones to communicate with each other. “If the criminals are doing it right, they have a network that is self-contained so the only calls they make are to the other prepaid cellphones in it,” says Scott Selby, coauthor of Flawless, an exhaustive investigation of a 2003 diamond theft in Antwerp that bagged more than $100 million worth of stones. “There is always an idiot who uses the phone to call his cousin in Naples or order a pizza,” says Selby. Basically, any call out of the closed circle allows the police to identify that phone and its location, then link it to all the other phones and their locations.

One of the reasons many of these cases remain shrouded in mystery over the years is that the police don’t want the bad guys to figure out the sources and methods that nailed them. It’s also common, Selby says, for prosecutors to claim someone they’ve got in custody was the mastermind even if they suspect that’s not really the case. “The masterminds rarely get caught,” he says. “They stay far away from the heist itself.” But in Belgium and many other countries the prosecution can ask for longer sentences for someone they claim is the brains behind an operation.

Even when the most important perps do go to jail, however, it’s only likely to be for a few years, and they usually claim the art, the jewels, or the money has just disappeared. They figure that they can amortize their prison time: if you have a $10 million share and pull a decade-long sentence (which would be on the high end in Europe) that’s a million a year for doing time. And there may be ancillary benefits. Leonardo Notarbartolo, the point man (if not the brains) on the 2003 burglary in Antwerp, did seven years in prison and signed a movie deal with Hollywood. (He was rearrested on various charges last February and is back in a Belgian jail.)

In many heists, of course, it’s also true that anyone who talks, or who might talk, ends up dead.

The worldwide ATM thefts carried out in December ($5 million) and February ($40 million) are examples of brilliant criminal planning, precision execution, and a deadly follow-up in which the only names that have come to light are those at the very lowest levels of the operation. On May 9, the U.S. attorney in Brooklyn unsealed the indictment of eight men, one of whom had already been killed.

The New York ATM crew had been given the personal identification numbers and the “cloned” prepaid debit cards from accounts in Oman and the United Arab Emirates. Hackers had removed the withdrawal limits. So small gangs of “cashers” in 26 countries were able to hit one teller machine after another almost simultaneously. Two members of the New York crew worked their way right down Broadway from the Upper West Side to Union Square in the space of a few hours. At the end of the day, the New York gang had withdrawn a total of $2.8 million and some of them were pretty giddy about the whole thing. Two even snapped a picture of themselves with stacks of cash neatly piled between them in their car.

The ATM thieves got even stupider after that. They started sporting flashy clothes, watches, and cars in their Yonkers neighborhood. (Among their new rides, as it happens, a Porsche Panamera, which suggests a certain affinity of tastes among thieves, if nothing else.) By April, federal investigators were closing in, and the leader of the local cell, 23-year-old Alberto Yusi Lajud-Pena, also known as “Prime” or “Albertico,” felt the heat. After depositing $150,000 in $20 bills in a Miami bank, he took off for his hometown in the Dominican Republic.

Prime was playing dominoes with friends a few nights later when, according to Dominican police, a man known as “Vaca Loca” (“Mad Cow”) and an accomplice burst in on them, guns drawn. Prime grabbed a pistol. Lead flew. Dominoes scattered. And Prime died, riddled with bullets. Mad Cow and his buddy retreated, and the $100,000 that Prime had with him in manila envelopes went untouched until the cops arrived and confiscated it.

Even if all the cash is recovered from the crew in Yonkers, about $42 million is still out there with other crews and the organizers.

After the first ATM hit in December, three of the New York cashers delivered $300,000 of their $400,000 take to Romania. One of their emails suggests a passing acquaintance, at least, with criminals in St. Petersburg, Russia. But if the feds know who those people are, precisely, so far they’re not saying.

The Rotterdam art theft—a nighttime heist at the Kunsthal museum—was carried out with what the Dutch police called “military precision.” But some of the underlings got caught in a classic bind: the seven paintings might be worth $125 million in the press, but there’s virtually no market for hot masterpieces, which can be traced through a number of databases to their rightful owners. When some of the paintings were offered to a potential buyer in Romania, three men there were arrested in January. Later, a Romanian woman suspected of having hidden the paintings at her place in Rotterdam was picked up, then released. A German man who offered to act as an “intermediary” for the artworks’ recovery also fell under suspicion. The paintings are still missing.

As for the used-car salesman Bertoldi, who’s allegedly connected to the Brussels airport heist, the French police picked him up in front of the train station in the town of Ars-sur-Moselle after he’d been under surveillance by the Swiss in Geneva. There, he had contacted a lawyer and a businessman, apparently hoping they could help him dispose of a quantity of diamonds. But the French cops found it hard to believe that Bertoldi would be involved with such a big heist, much less the mastermind subsequently portrayed in many press reports.

Bertoldi, 43, had been in and out of trouble, and occasionally in and out of jail, for several years. He did a little business buying and selling cars down on the Riviera, then moved to Casablanca with his Moroccan girlfriend and had an interest in a restaurant there. “For us he was just a common conman,” French investigators told a Belgian newspaper following up on the case. Bertoldi’s lawyer, Olivier Rondu, has flatly denied all the allegations connected to the Brussels airport job. Rondu says his client is anxious to have his day in court.

Bertoldi’s mother portrays him as the perennial fall guy. “He often took everything on his back in the place of others,” she told the local paper in her hometown of Metz. “Maybe some of his old demons caught up with him, or old acquaintances.” Maybe, she said, “they came looking for him in Morocco.”

The person who now appears most likely to be the real mastermind, identified only as Tarek B. by Belgian authorities, also has Moroccan connections. And Tarek B. is still at large. Among those picked up in the initial wave of detentions earlier this month, then released, was a woman who said she had been Tarek’s mistress, despite the fact he is married and has a couple of kids. She said that she had been with him in Morocco in March, which was after the heist. But of course she said she knew nothing about that. Her only explanation for the relationship: “I fall for the bad boys every time.”

Maybe that was Bertoldi’s problem, too.