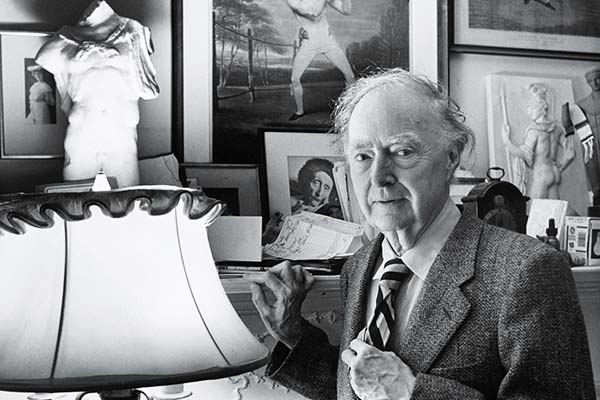 Courtesy of the Stephen Bulger Gallery.

[dropcap]H[/dropcap]e looks like a zombie in his last photograph, a patch of sunken skin and bones who wrote about skeletons and dreamy half-dead children all his life. He lived in the same closet-like apartment for 50 years—James Purdy, the renegade and recluse of Brooklyn Heights. He wouldn’t take part in the escapades of high culture. Reviewers rarely liked his books, considered them bloodless, arcane, and full of misanthropy and a perverse mischief that unsettled everyone unfamiliar with his sly wit.

Like Herman Melville, his closest literary ancestor, he was unremembered when he died in 2009 at age 94, one more Ishmael, with a small coterie of followers. He’d been celebrated for a little while, in the late ’50s and ’60s, when his acerbic novels and stories were read on college campuses, and after his first novel, Malcolm, arrived on Broadway in 1966, in a superb adaptation by Edward Albee, who also wrote about lost, wayward, and murderous children and young men. Then Purdy fell back into the dark.

I met him during this period of exile, when his own publishers were puzzled by his books and tried to palm him off as a purveyor of realistic fiction. I happened upon one of these novels, In a Shallow Grave, and fell in love with it—a fairytale full of ghosts. Purdy’s hero, Garnet Montrose, can never find a home for himself. He’s a war veteran who has returned from the South China Sea with the oddest wound in creation.

“When I was blown up, all my veins and arteries moved from the inside where they belong to the outside, so that as that army doc put it, I have been turned inside out in all respects.” He’s now the color of mulberry juice. People cannot bear the sight of him. They run from Garnet Montrose. His own unnatural body has become a kind of shallow grave. But he isn’t morose at all. He sets out to court his “childhood sweetheart,” the Widow Rance, and he has to woo her with letters, like a spooky, blood-red Cyrano, since she’d rather fend off an army of black spiders than meet with Montrose. The novel takes us through the radical twists and turns of Montrose’s courtship rites, as his arteries and veins suddenly sink back under the skin, and the widow falls in love with his white winter face.

Purdy invited me out to Brooklyn in 1975, after I reviewed his novel in The New York Times. I’d called him the outlaw of American fiction, shunned by critics who couldn’t warm to that rough, unfashionable scratch of his in the reader’s ear. But I felt completely welcome in his world of syncopated ghosts.

He lived near the Promenade in one of those prewar buildings that could have been some kind of castle with crenellated walls. I remember a modest little man with a slight Midwestern drawl sitting in a ravaged armchair, like some forlorn emperor-clown with ghostly white cheeks, dignified and disheveled at the same time. He rankled in his chair, and I realized how much he resembled some of his own heroes, how he could have been Garnet Montrose, with that winter face of his, or Malcolm, the fatherless boy, sitting on a bench, with a golden, lyrical light behind him, or Cabot Wright, the serial rapist in Cabot Wright Begins, whose attacks were like the outpourings of some strange, quiet poetry. “He didn’t kill, he didn’t bruise, he didn’t cuff or buffet. He used, everybody insisted afterwards, some form of hypnotism. He raped easily and well.”

Purdy didn’t rant to me. He didn’t complain or curse any critics. But he worried he wouldn’t find new readers, that his novels would be forgotten, and it haunted him. How could I reassure Purdy? As he sat there, he almost sank out of sight in that somber, minuscule apartment, buried alive in a tomb of books.

Now Purdy has leaped out of his own shallow grave—four years after his death, we have The Complete Stories of James Purdy. The cover art reveals a portrait of Purdy as a brooding young man, with sensuous lips, lightning blue-gray eyes, and red hair, utterly removed from that emperor-clown I had met. Cabot Wright could be staring at us with his “flaming red hair.” Like Cabot, he could also be “a supposititious child,” with many fathers or no fathers at all. He could have sprung out of nowhere. Purdy seems to have no antecedents, no prehistory at all. It’s as if Alice, in these remarkable stories, were staring back at us through the far side of the looking glass and babbling to us in some manner of English we had never heard before.

Fire engines often wail in the background, as if these stories took place in some department of hell. Suicide becomes a verb rather than a noun in Purdy’s lexicon, as in Eventide, where two sisters in the blazing summer heat of a black ghetto worry over the fate of their sons. One of the sisters, Mahala, knows that her boy will never come back. “I been waitin’ all day for the news … I could suicide over it all.”

In Color of Darkness, we meet a dysfunctional father and son. The father seems ancient, decrepit. The boy, Baxter, asks him how old he is:

“Is that old enough to be dead?” the son wondered.

“Yes and no,” the father replied.

The father has no memory of where Baxter came from, as if the boy “were a gift somebody had awarded him,” and “as the gift increased in value and liability, his own relation to it was more and more ambiguous and obscure.”

His wife is gone. He cannot even remember the color of her eyes. The only vestige he has is an old wedding ring. The story could be a kind of cruel prequel to Malcolm, where another motherless boy sits on his bench, waiting for his father to return. There’s a hint in Malcolm that the missing father may have sexually abused the boy. And it almost seems in Color of Darkness that the boy and his father are an ancient, married couple.

The boy sucks on something metallic near the end of the story. It’s a golden toy, he insists with a glassy look in his eyes. The father seizes the boy’s chin—his wedding ring falls to the carpet, as the boy kicks his father in the groin.

This is Purdy’s sense of the “quotidian,” where his characters struggle in the dark and careen in and out of nightmare, and where Cabot Wright, the rapist redeemer with red hair, has to battle against “that deadly monotony of human continuity” and move us all into some magical void, where children confront charlatans at every turn, where “innocence” is another form of corruption, where heartbreak and silliness often dance side by side, as if Purdy were some great juggler who has created his own master lexicon from the rough-hewn, irregular speech of a boy from the midlands of Ohio.

In his very best stories and novels Purdy has invented a poetic dreamscape where evil and naiveté collide. He is an enchanter of lost souls who delights and disturbs us with his wayward, winsome ghosts.

Charyn is the author of The Secret Life of Emily Dickinson. His latest novel, I Am Abraham, will be published next year. From our July 26, 2013, issue; Enchanter of Lost Souls.