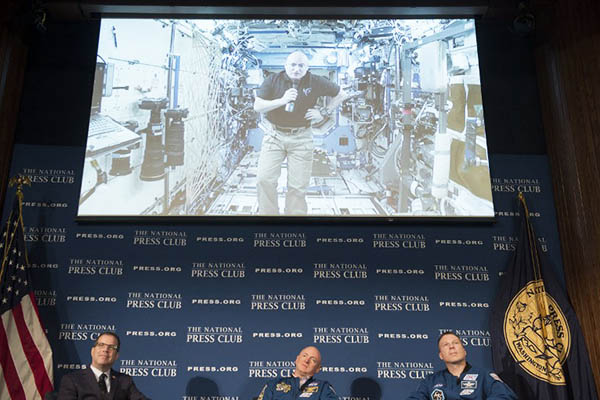 Astronauts have been using the International Space Station to study effects of long-term spaceflight on the human body and mind.

Astronauts celebrated 15 years of circling the Earth aboard the International Space Station on Monday, a new milestone for an orbiting space lab that some say deserves the Nobel Peace Prize.

With operations expected to last another decade, the world’s space agencies are now looking to the outpost to provide key data on how future space pioneers may withstand the rigors of venturing further, perhaps even to Mars. “We do a lot of experiments up here but I think the most important experiment is the space station as an orbiting vehicle that keeps humans alive in space for long periods of time,” said NASA astronaut Scott Kelly, during a live press conference with the station’s crew to mark 15 years of continuous habitation.

Along with Russian cosmonaut Mikhail Kornienko, Kelly is spending one year at the ISS so scientists can study the effects of long-term spaceflight on the body and mind. Any trip to Mars would likely last years, raising the issue of harmful radiation. But it could also help scientists understand how to nourish astronauts for long periods and how to maintain healthy crew psychology.

“The space station really is a bridge,” U.S. astronaut Kjell Lindgren told the media conference. “It is a test bed for the technologies we need to develop and understand in order to have a successful trip to Mars.”

The ISS was just a two-module unit when the first crew to inhabit the research laboratory project arrived on Nov. 2, 2000. They were American astronaut Bill Shepherd and Russian cosmonauts Sergei Krikalev and Yuri Gidzenko.

Since then, a rotating cast of more than 220 of the world’s elite astronauts have lived and worked at the ISS, which includes 16 participating nations and is led by the United States and Russia. Modules were added over time and today the football-stadium-sized outfit represents about $100 billion in investment and provides as much living space as a six-bedroom house.

Traveling at an altitude of about 400 kilometers and a speed of about 28,000 kilometers per hour, the space station circles the Earth once every 90 minutes.

Typically, six crew at a time eat, sleep and float around in the microgravity environment, working 35 hours per week on a host of science projects for a mission duration of about six months.

After one crew of three astronauts departs, three replacements blast off aboard a Russian Soyuz spaceship, now the only mode of transport to and from the ISS after the U.S. space shuttle program was retired in 2011.

John Holdren, director of the White House Office of Science and Technology Policy, called the 15th anniversary an “incredible achievement,” and said “the international partnership that built and maintains the station is a shining example, moreover, of what humanity can accomplish when we work together in peace.”

In the past, NASA administrator Charles Bolden has said the project is worthy of the Nobel Peace Prize. Asked about that assertion, Russian cosmonaut Oleg Kononenko, who also took part in Monday’s news conference, said Bolden is “100 percent right.”

“People on the ground sometimes fail to hear each other, to see each other. Here in space, this is impossible,” Kononenko said through a translator. “Everyone is important here and the success of the program—and sometimes even life—depends on what each and every one of us does.”

The six crewmen currently living in space planned to mark the anniversary with a communal dinner and some reflection, said Japanese astronaut Kimiya Yui. “We are going to have a meal together,” he said. “And also we would like to talk about the future.”