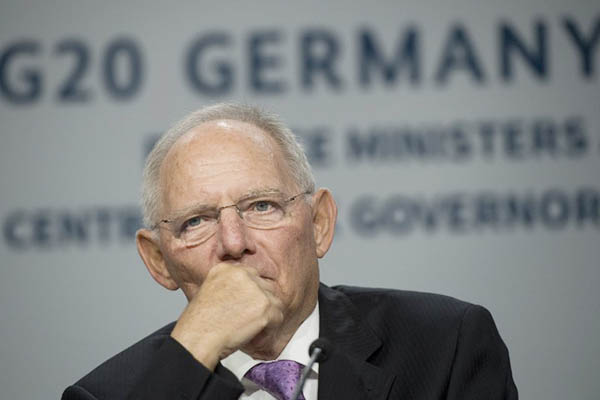 The Group of 20 major economies sent a message on Friday on the threat that rising protectionism poses to the global economy, but the United States cast doubt over its adherence to that stance.

U.S. Treasury Secretary Steven Mnuchin reiterated the Trump administration’s emphasis on defending America against what it sees as unfair trade practices, and called on the IMF to do more in its watchdog role. His comments came just hours after a meeting of G20 finance ministers in Washington which saw Germany’s Wolfgang Schaeuble say there was “broad agreement” that “free trade is better for global growth.”

“There was a broad consensus” that “protectionism would be damaging to the global economy and the concerned economies as well,” the German minister, whose country holds the rotating G20 presidency, told reporters. That seemed to mark a striking change of tone since the last finance ministers meeting in Germany, one month ago, when the United States prevented the G20 from including a traditional pledge against protectionism in its final communiqué, calling the language “irrelevant.” It was unclear how far the renewed “consensus” extended. The group did not release a communiqué this time, and Mnuchin’s statement appeared to weaken Schaeuble’s declaration of unity.

Rising protectionist and anti-globalization sentiment in key economies has created a tense atmosphere at the normally placid and formulaic gathering of finance ministers, where the G20 officials met ahead of a semi-annual meeting on Saturday of the International Monetary Fund.

Concerns have been fueled by President Donald Trump’s threats to impose tariffs on countries that have trade surpluses with the United States, by the British decision to leave the European Union, and anti-internationalist rhetoric by some candidates in the French presidential election campaign.

In a short but tough statement, Mnuchin said the United States “will continue to promote an expansion of trade with those partners committed to market-based competition, while more rigorously defending ourselves against unfair trade practices.” Trump officials have directed some of their most aggressive language at Germany and China. Mnuchin said “excessively large trade surpluses… are not conducive to supporting a free and fair trading system.”

“Countries with large external surpluses and sound public finances have a particular responsibility for contributing to a more robust global economy by deploying fiscal policy aggressively to boost growth and help facilitate global rebalancing,” he said. He said the IMF should to do more to monitor these countries and “identify specific policy adjustments” they should implement.

The IMF has flagged rising protectionism and possible trade wars as a threat to the global economic recovery, just when it is finally gaining momentum. And German central bank chief Jens Weidmann said the G20 finance ministers “underlined the negative growth effects of raising barriers to trade.”

“Almost everybody underscored the importance of [an] open market and free market access,” he said.

Schaeuble said the G20 ministers also agreed that economic growth must be made “more inclusive” in order to stem the rise of protectionism. “Many people feel that they do not benefit from the advantage of growth and globalization, and we need to tackle this, otherwise we will see more protectionism and countries retreating from globalization down the road,” Schaeuble said.

Officials agreed on the “need to do more” to spread the benefits of growth and globalization, which includes investments in education and infrastructure. That echoes the repeated urgings of IMF Managing Director Christine Lagarde who this week has turned up the volume on the call to wealthy countries to help those left behind by global prosperity.

On the issue of financial regulation, Weidmann said there was consensus about continuing reforms agreed previously and there were few fears about the risk of seeing erosion of the regulations implemented in the wake of the 2008 global financial crisis. The “debate about the regulatory ‘race to the bottom’ has disappeared” from G20 discussions, Weidmann said. But there, too, U.S. actions contrasted with that statement as Trump on Friday signed an order directing Mnuchin to review the U.S. financial regulations known as Dodd-Frank that were erected in the wake of the crisis.

“A significant amount of time has passed since the crisis. With the passage of time and with your leadership, we are now well positioned to evaluate what works and what doesn’t,” Mnuchin said on Friday. “Where we can do so, we will lift the burden of excessive regulation to make sure that banks can lend, small businesses can borrow, and American workers can thrive,” he said.