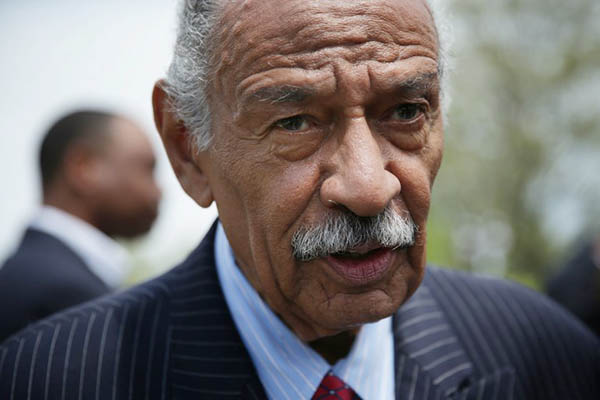 John Conyers, 88, maintains allegations are untrue but will retire to ‘preserve’ legacy

Veteran U.S. Democrat John Conyers announced on Tuesday he is leaving the House of Representatives after more than five decades in office, following a series of sexual harassment accusations by former staffers.

“I am retiring today,” Conyers, 88, told a Detroit radio station, as he became the first to step down among four serving U.S. lawmakers facing sexual misconduct allegations. He also endorsed his son, John Conyers III, to replace him in his congressional seat.

Speaking from an unnamed hospital where he reportedly was being treated for stress-related complications, the longest-serving member of Congress maintained that the allegations against him “are not true,” and that he could not explain their origin.

The lawmaker was abandoned by party leadership when the seriousness of the allegations against him became apparent, and as Congress grapples with how to address the issue of sexual misconduct. Congresswoman Sheila Jackson Lee took to the House floor to read a letter by Conyers to his colleagues, saying he notified the Republican House Speaker Paul Ryan and Democratic leader Nancy Pelosi that he was vacating his seat.

“I was taught by a great woman, my mother, to honor women,” Conyers wrote, according to the congresswoman. “Given the totality of the circumstance of not being afforded the right of due process in conjunction with current health conditions and to preserve my legacy and good name, I am retiring.”

It marked a stunning and rapid fall for one of America’s civil rights pioneers, a man who worked with Martin Luther King Jr. and hired rights icon Rosa Parks on his congressional staff, where she worked for 23 years. But Conyers, who took his Michigan seat in 1965 and was a founding member of the Congressional Black Caucus, insisted that his record would not be tarnished by the accusations.

“My legacy can’t be compromised or diminished in any way by what we’re going through now. This too shall pass,” he said, speaking on the Mildred Gaddis Show.

Several female former staffers have come forward in the past two weeks with damning allegations. One of them, Marion Brown, last week broke a non-disclosure agreement that she signed after receiving a settlement, reported to be $27,000, when she left her job in Conyers’s office, saying she “felt compelled” to speak out. “It was sexual harassment, violating my body, propositioning me, inviting me to hotels with the guise of discussing business and then propositioning me for sex,” Brown told NBC.

Wounded by the mounting accusations, and well aware of the potential implications for Democrats’ efforts to win congressional seats in next year’s mid-term elections, the party’s congressional leadership last week called for Conyers to resign. “There can be no tolerance for behavior that subjects women to the kind of conduct that has been alleged,” said Jerrold Nadler, who replaced Conyers in his leadership role on the House Judiciary Committee.

Conyers has continued to deny the women’s accounts, and his lawyer said Conyers would not pay back the settlement money that was paid to Brown at taxpayer expense. “There’s been no discussion of that,” Reed told HLN television, saying the settlement was “cleared by ethics attorneys.”

Conyers is one of four sitting U.S. lawmakers hit by allegations of sexual misconduct in the wake of the claims targeting movie mogul Harvey Weinstein, which triggered a torrent of accusations against powerful figures in the worlds of entertainment, media and politics. The other lawmakers are Senate Democrat Al Franken, House Democrat Ruben Kihuen, and House Republican Blake Farenthold.

Republican congressman Joe Barton separately announced last week he would not seek re-election after a nude photograph of him taken while he was separated from his wife circulated online. The specter of sexual misconduct is also overshadowing a high-stakes U.S. Senate race in Alabama.

Republican Roy Moore, a former Alabama supreme court chief justice, has been accused by several women of sexually molesting them when they were teenagers—one was 14 at the time—and he was in his thirties.

President Donald Trump, who himself faced sexual misconduct accusations when he was a candidate, has endorsed Moore. After distancing itself from the candidate, the Republican National Committee followed suit, announcing it is helping fund Moore’s campaign for next Tuesday’s special election.

Several Republican senators, including Senate Majority Leader Mitch McConnell, demanded unsuccessfully that he quit the race. McConnell said on Tuesday that if Moore wins and joins the Senate, “he would immediately have an issue with the Ethics Committee,” which could open an investigation.