No Sign of Breakthrough on First Day of Syria Talks 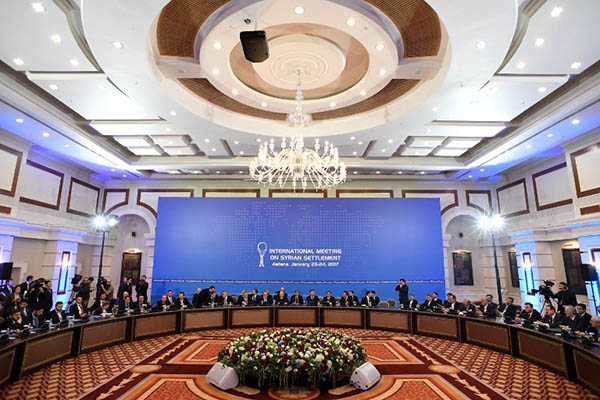 Washington announces willingness to work with Russia against Islamic State in Syria.

Peace talks with Syrian rebels and the war-torn country’s government got off to a rocky start Monday, while Washington said President Donald Trump was open to joint operations with Russia against Islamic State jihadists in Syria.

The Syrian rebels’ representatives vowed to keep fighting if peace negotiations with the government of President Bashar al-Assad fail, as the first day of talks in the Kazakh capital Astana ended with no apparent breakthrough.

Monday’s meetings, organized by key players Russia, Turkey and Iran, could have marked the first time armed rebel groups negotiated directly with the Assad regime since the conflict erupted in 2011. But the rebels backed out of direct talks because of the regime’s continued bombardment and attacks on a flashpoint area near Damascus.

However, they took part in indirect talks with the government and held a three-way meeting with Russia, Turkey and the United Nations, an encounter rebel spokesman Yehya al-Aridi described as “long and productive.”

“If the negotiations succeed, then we are with the negotiations,” another rebel spokesman Osama Abu Zeid told AFP early on Monday. “If they don’t succeed, unfortunately we’ll have no choice but to continue fighting.”

Meanwhile the Russian army announced on Monday that it had carried out joint attacks on Islamic State targets with the United States, a claim swiftly denied by the Pentagon. The commander of the Russian air force contingent in Syria on Sunday “received from the American side… the coordinates of I.S. targets in Al-Bab, in the province of Aleppo,” Russia’s defense ministry said in a statement.

The U.S. defense department denied the Russian claim but later Trump’s spokesman Sean Spicer told reporters in Washington that the new U.S. president is open to conducting joint operations with Russia to combat the Islamic State group in Syria. “If there’s a way we can combat ISIS with any country, whether it’s Russia or anyone else, and we have a shared national interest in that, sure, we’ll take it,” Spicer told reporters.

The negotiations in Kazakhstan’s capital come amid a rapprochement between regime ally Russia and rebel backer Turkey, who have come to fill the vacuum left by months of U.S. disengagement from the conflict.

Trump’s administration was invited to participate in the talks but did not send a delegation. Washington is instead represented by its ambassador to Kazakhstan, while France and Britain also sent envoys.

A member of the rebel delegation told AFP that the group would agree to seeing Russia as a guarantor of the current ceasefire but not Iran, another Assad backer.

Aridi told reporters the “two sides are working on issues relating to the confirmation of the ceasefire” brokered last month by Ankara and Moscow. “It’s not been a bad day,” a Western diplomat told AFP. “The delegations met, made presentations.”

The initiative has been widely welcomed, but the two sides arrived in Astana with apparently divergent ideas on their aim. Chief rebel negotiator Mohammad Alloush said in his opening statement that the opposition was focused on bolstering the nationwide truce, while Assad has insisted rebels lay down their arms in exchange for an amnesty deal.

“We came here to reinforce the ceasefire as the first phase of this process,” Alloush said in comments broadcast online. “We will not proceed to the next phases until this actually happens on the ground.”

Damascus has also called for a “comprehensive” political solution to a conflict that has killed more than 310,000 and displaced more than half of Syria’s population.

The head of the regime delegation, Syria’s U.N. ambassador Bashar al-Jaafari, said in his opening comments carried by the country’s SANA state news agency that he hoped the talks “will reinforce the cessation of hostilities.” He added the government was keen to separate the rebels from I.S. and former Al Qaeda affiliate Fateh al-Sham Front.

Previous pushes for a long-term ceasefire have faltered, with both sides trading accusations over violations. Although Russia and Turkey back opposing sides, they have worked hand-in-hand in recent weeks to try to secure an end to the brutal war and forged a partnership likely to be tested in Astana.