Home Lightbox Not Saving the Children

Not Saving the Children 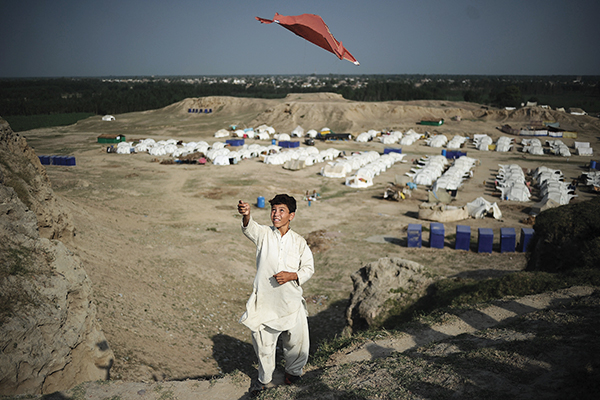 Pakistan is getting ready to turn the screws on NGOs. This will serve no one.

In November, the Economic Coordination Committee of Pakistan’s federal cabinet approved new regulations for nongovernmental organizations receiving “foreign contributions.” This, according to the Ministry of Finance’s press release, “to bring transparency in the working of the organizations receiving any sort of foreign funding and removing any difficulty which these organizations might have been facing on account of lack of such a framework.”

The proposed regulation seems to acknowledge the good work these organizations have been doing, but betrays a wariness that has erupted into full-blown paranoia in the aftermath of an NGO and Dr. Shakeel Afridi apparently helping the CIA locate Osama bin Laden in Abbottabad: “The government encourages philanthropic activities and shall not restrict any [international NGO] from working in Pakistan in case of any calamity—but they will have to carry on with their work after bringing their activities into the knowledge of the government and with its approval.”

NGOs will also be required to seek permissions from the State Bank of Pakistan for foreign-exchange receipt and disbursal and “have to maintain a full disclosure of their activities, their respective areas of working, the source of their funding, and the utilization of their funds.” Pakistanis are to be afforded preferential hiring and foreigners, with global technical expertise, limited to no more than 10 percent of the total staff strength. Such foreigners must also seek permission from the government to visit “prohibited areas.” And the NGOs require permission from the government to open and maintain local offices and to raise funds. NGOs also cannot distribute any literature that causes “religious resentment,” and the government can de-register any NGO it finds noncompliant, especially if its activities are “considered detrimental to the national interest, the sovereignty and integrity of Pakistan” or are “dubious in nature or in violation of cultural and religious sentiments of people.”

Such suspicion of NGOs is not a Pakistani phenomenon alone. Globally speaking, NGO-government relations are not only tenuous but also generally straitened. Civil society organizations have quadrupled in number across the developing world over the last 20 years. This in turn has generated a sense of mistrust between the state and NGOs.

A 2009 report of the International Center for Not-For-Profit Law noted that international funding for NGOs was being subjected to greater regulation across the board. Several factors have contributed to the predilection of developing countries toward greater control of NGOs. Two in particular stand out. The first is based on concerns about the “national interest” and “sovereignty.” The second flows from concerns about money laundering and possible links to terrorism. At some minor level, the regulating governments are also actually concerned about aid effectiveness and impact.

“National interest” and “sovereignty” are hard-to-define terms in the developing world. In Pakistan, for example, these terms convey an opacity and rigidity that few are permitted to challenge. So the “battle lines” between the state and NGOs are drawn on the basis of optics rather than reality. From the state’s perspective, NGOs are irksome because they tend to question the basis of the sacred national interest by advocating for social change, human rights, equitable ownership of natural resources, and for the environment. By definition, NGOs voice critique of governmental action in order to realign policy to foster a free and functioning society. Criticism, well meaning and constructive as it often is, of state action or inaction seldom sits well with any government. Presenting a cogent counternarrative or antithesis to the tired strains of “national interest” is viewed by developing states as outright hostility, especially if the dissenting voice is “foreign funded.” Consequently, in polities where opposing opinions are not tolerated, civil society faces a blowback.

Authoritarian regimes, like in today’s China or in Latin America of the not-so-distant past, NGOs have limited space to operate. In more liberal climes, where the infrastructure of democracy is better established, NGOs flourish. The relationship between the government and nongovernmental organizations does not have to be a zero-sum game. States, including Pakistan, have at times been more subtle in their goal of bringing NGOs “in line.”

After Independence, NGOs in Pakistan emerged as welfare organizations to assist in the rehabilitation and resettlement of refugees. Their relationship with the state was benign, based on cooperation and coexistence. But by the 1980s, with successive governments and the free market having failed to provide for Pakistani citizens, civil society came to be viewed increasingly as an alternative to the monopoly of the state. This binary was boosted by local and foreign donors who saw NGOs as a substitute for the faltering public sector. Some 12 to 15 percent of all development aid in South Asia during this time was channeled through NGOs. Pakistan balked at sharing foreign resources with the nonprofit sector; and NGOs were reconstructed in the public imagination as vestibules of a Western agenda.

The following decade, Pakistan adopted a new tack to reduce competition over scarce external funding. It promoted government-supported nongovernmental organizations or GONGOs. Pakistan took the lead in this partnership model, establishing initiatives like the Social Action Programme. This model was taken to its extreme in 1999 when Gen. Pervez Musharraf handpicked several civil-society leaders for his cabinet. After 9/11 and the international pressures and concerns Pakistan faced as a result, the model fell apart. The unraveling of relations continued and has today taken the form of imminent new regulations in Pakistan to control and inhibit the nonprofit sector.

The years of Gen. Zia-ul-Haq’s rule, from 1977 to 1988, were particularly regressive for women’s groups. Afshan Jafar’s Women’s NGOs in Pakistan (2011) illustrates how Zia’s Islamization eroded women’s status in society and created extreme confrontation between rights groups and the state. The introduction of ugly, anti-women laws triggered spells of protest that were put down brutally. (My own mother was jailed for protesting against the “Islamic” laws Zia enforced to target women.) The mainstream narrative supported the state and depicted women’s groups as “anti-state” and “antiestablishment.” This false stigma survives to this day: see, for example, the pervasive take on Mukhtar Mai’s work.

Benazir Bhutto took over in 1988 as the first woman to lead a Muslim-majority state. But she could only challenge the prevalent misogyny to a limited extent. She set up a women’s bank and women’s jails, but her first government also introduced a bill designed to control NGOs. This bill was unnecessarily intrusive and would have essentially crippled nonprofit growth and stifled critical voices by creating high regulatory hurdles.

The ruling Pakistan Muslim League (Nawaz) is perceived as being more negative toward NGOs. This could be a hangover from the years of Zia, whose setup Prime Minister Nawaz Sharif served as Punjab’s finance minister. In some ways, the new regulations on NGOs being introduced by Sharif’s party go back to the persecution of advocacy and rights groups in the Punjab in 1998 because many of them had criticized the country’s blasphemy laws. That fight led Sharif’s then-government to delist several NGOs, forcing them to close offices, and pitted human-rights activists against the powerful conservative establishment. Like some of his predecessors, Sharif’s attitude appears to be selectively ambivalent toward NGOs: financially-independent “foreign funded” NGOs are considered unpalatable, but the “welfare-oriented” ones are seen as nonthreatening.

A more unvarnished reason for animosity toward NGOs, from those in a position of power, is the fact that many of the impugned organizations have taken up for advocacy causes—political freedom and civil rights, protection of the environment, girls’ education, women’s reproductive rights, HIV/AIDS control—that are deemed inconsonant with sacrosanct socio-religious norms. Given this, what is the real purpose of the new regulations Pakistan is imposing on nongovernmental organizations? Are new regulations being introduced to improve overall effectiveness of external-aid programs or to simply stymie and stifle the growth of the “alternative” sector?

Aid effectiveness and its correlation to economic growth and impact is a complex issue. Certain analysts, especially those from the neoclassical school, believe that aid—whether in the form of external borrowings or grants—enhances national productivity by reducing the gap between savings and investment. Those who support Big Government and incentivizing of inefficient capital flows believe lack of accountability renders foreign aid ineffective.

It is critical, of course, to examine both the capacity of NGOs to ensure absorption and effectiveness of aid—an issue that arose at the time of the U.S. Enhanced Partnership with Pakistan Act of 2009, which envisaged routing much of the committed $7.5 billion in aid through the nonprofit sector—and the capacity of governmental institutions to provide the sort of hands-on oversight that the new regulations demand. Many NGOs in Pakistan have undoubtedly excelled in establishing strong internal systems and demonstrated high standards of fiscal discipline; others have not. So the functioning of NGOs can certainly be improved, and public oversight for this is necessary. But the new regulations must strike a balance between micromanagement and promoting impact efficiencies.

Other South Asian countries have tried similar options to tame “foreign funded” NGOs. The Indian Foreign Contribution Regulation Act of 1976 and the NGOs Affairs Bureau of Bangladesh were both introduced on the premise that NGOs had not only misused funds provided by foreign donors, but had also overstepped their mandate by interfering in matters of “national interest.” In India and Bangladesh, many state-targeted NGOs had to curtail their operations, cutting back on outreach. The 2010 reincarnation of the Indian Foreign Contribution Regulation Act shares much in common with Pakistan’s proposed new regulations. Each allows their respective authorities to target organizations they see as national-interest threats. (An unconfirmed report from India claims that the accounts of some 4,000 NGOs were revoked by its Ministry of Home Affairs on procedural grounds.) New York-based Human Rights Watch has condemned the Indian legislation as a means of forcing local advocacy groups to “toe the line.”

Pakistan’s proposed new regulations for NGOs require open debate. Developing a framework for ensuring fiscal discipline in the nonprofit sector is important, but that is not the goal here. It is evident that the real purpose of the government is to control the flow of funds to the sector, not to strengthen institutional capacity or to improve overall accountability. The inevitable impoverishment of such organizations will chasten them, and even disabuse them from advocating causes considered inimical to the practitioners of entrenched social evils.

The new law will give government functionaries unbridled discretionary powers that will be abused and misused, and this will delay implementation and delivery of critical nonprofit services to at-risk communities. NGOs, required to reregister with the bureaucracy every five years, will be subjected to whimsical scrutiny and gratuitous interference. This will have very deleterious effects on civil society, whose vibrancy and independence are a precondition for the rooting of democracy.

Pakistan suffers from several simultaneous emergencies at multiple levels. (One of the most pressing priorities is meeting U.N. Millennium Development goals.) Pakistan is laggard on eliminating poverty, ensuring universal education, creating gender parity, and reducing the incidence of polio and malaria. We need to develop mutually-reinforcing strategies for all stakeholders—the state, the nonprofit sector, the public—to work together to address these niggling issues. Islamabad’s plans for the NGO sector will only exacerbate the baleful binary, forcing many NGOs out, imperiling polio vaccinators who work with NGOs, and leaving hapless citizens, the wretched of this country, with little more than false hope to live on.

Zafar is the founder and managing director of Kashf Foundation. She lives in Lahore. From our April 12, 2014, issue.