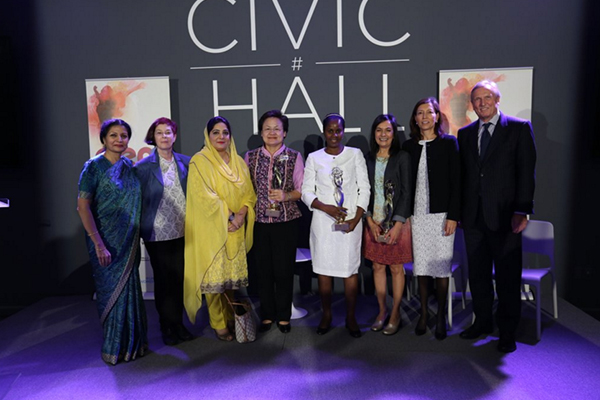 Khan and the other two 2015 Global Achievers—Pamela Hamamoto, the U.S. ambassador at the U.N., Geneva; and Nancy Hafkin of Women in Global Science and Technology—were honored for their “exceptional efforts” at the Gem-Tech Awards ceremony of the U.N.’s International Telecommunication Union (ITU) and U.N. Women in New York on Dec. 14.

Speaking at the event, Khan thanked Prime Minister Nawaz Sharif and dedicated her award to the people of Pakistan, “particularly the women and young girls of my country.”

Khan said Pakistani women have the will and potential to transform their country but not enough opportunities to do so. “There is a need to maximize collaboration under a strategic global partnership,” she said, “to open up the universe of ICT-powered opportunity that the women of the world have been waiting for and which they well and truly deserve.”

Since assuming office in June 2013, Khan has spearheaded a number of initiatives that have won her praise nationally and internationally.

Last year, the Ministry of IT auctioned 3G and 4G spectrum licenses, which will assist in promoting women entrepreneurs though easier online access, for over $1 billion. The Ministry has launched technical-skills development programs for disadvantaged women, launched startup incubators, and partnered with Microsoft to foster computer-programming education for young girls. It is also establishing some 500 facilities across Pakistan through private-public partnership for software certification and coding and app development over the next two years. Khan is also working on a cyber-crime law to protect women from online harassment and abuse.

“The awards recognize the power of ICTs to transform women’s lives by providing them with better access to education, information, support networks, employment opportunities, avenues for political participation, and devices and apps that can improve personal safety,” according to U.N. Women. “The awards are celebrated this year as part of the 20-year commemoration of the Beijing Platform for Action.”

For promoting women in the technology sector
Technovation Challenge, U.S.

For applying technology for women’s empowerment
The Research Center of Communication and Development Knowledge Management, Thailand

Winners were selected from 150 nominations from 55 countries covering a wide range of projects and advocacy work linked to harnessing ICTs for women’s empowerment.