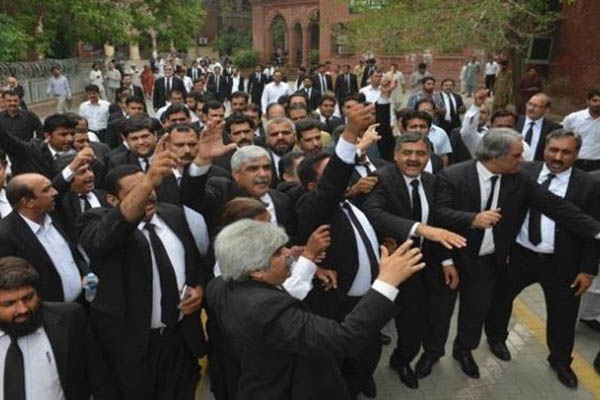 A section of lawyers, the dirty eggs of the profession, are in news again, storming not the Bastille but the Lahore High Court, raising slogans against judges, defying established courtroom norms, the courts’ sanctity and the very fundamentals of the profession they practice.

If anyone finds it ironic, it is not. Irony, like tragedy, is now a farce.

Nothing new in this. To quote Shakespeare’s Fool in King Lear: “When usurers tell their gold i’ th’ field,/And bawds and whores do churches build—/Then shall the realm of Albion/Come to great confusion.”

But before we get to the present day, let’s revisit October 2010, when lawyers from the Lahore District Bar Association were out on The Mall in full force. Reason: their ‘grievances’ against District and Sessions Judge Zawar Ahmed Sheikh had not been addressed by the Chief Justice of the Lahore High Court, then-Justice Khawaja Sharif.

The lawyers claimed Judge Sheikh misbehaved with them and must be sacked or transferred. And pray, what does misbehaving with lawyers mean? Answer: if you do not do as the lawyers bid you to, you are in contempt of the lawyers. And, how do you pay for that? They can beat you up; they can take the law into their hands, bend and twist it, all for the higher purpose of restoring its [law’s] sanctity. And, what does the sanctity of law mean? Answer: it means kowtowing to what the lawyers want. Voila! The wheel comes full circle.

Perish the thought that this is a circular argument and a logical fallacy. It matters not that in this case from 2010, Judge Sheikh would not accede to some lawyers’ extra-legal demands and, worse, refused to place the district bar’s earmarked men in auxiliary jobs at the courts. The bar has a quota to get some of their people placed in such jobs, more an accepted bad practice than any legally sanctioned right. And, yes, district bar officeholders actually make money out of this.

There were other issues too, in addition to the sleazy bar politics. But the important point is that when Judge Sheikh returned from his leave, the LBA lawyers felt insulted and, lets take a guess, stormed the Lahore High Court Chief Justice’s chamber. The Punjab government had to enforce Section 144 in the area.

The next day, when the lawyers tried to organize a rally on The Mall, they were stopped. They got into a confrontation with the police, which then responded with force and arrested about a hundred of them but not before they had got into fisticuffs with television reporters and cameramen.

The upshot: the LBA and the Punjab Bar Council lawyers passed a resolution, apparently also supported by the Lahore High Court Bar Association, banning the entry into their premises of the LHC Chief Justice, a number of other judges, and several prominent lawyers that spearheaded the 2007 movement. Additionally, the bar also suspended the membership of Punjab Law Minister Rana Sanaullah and the CJ-LHC himself. Hallelujah!

Fast forward to now, seven years later and with much hooliganism by the lawyers between then and now. Let’s begin with the sequence of events:

July 24: Lawyers led by the president of the Multan High Court Bar Association misbehave with Justice Qasim Khan in his courtroom, forcing him to retire. They tear down his nameplate and raise slogans against him in the corridors.

July 24: CJ-LHC recalls all the judges working in the Multan Bench due to security concerns but permits filing of cases at the Principal Seat (Lahore) and Bahawalpur Bench.

July 27: Show-cause notice for contempt of court is issued to Sher Zaman Qureshi, president of the Multan High Court Bar Association, and Qaiser Abbas, advocate. Both are asked to appear before a 5-member Bench of the LHC on July 31 at the Principal Seat.

July 31: Neither contemner appears on that appointed date. At the request of the Lahore High Court Bar Association president, the LHC bench adjourns the matter till Aug. 2 and orders the two contemners to appear before it.

Aug. 2: Around 50-60 lawyers, including some candidates for the upcoming elections for District Bar Association, Lahore, and a candidate for the post of president Supreme Court Bar Association, chant slogans against Chief Justice Mansoor Ali Shah in his courtroom. The full bench has to adjourn because of their unruly and unlawful behavior. The contemners again fail to appear before the bench. Once again, on the request of the LHCBA president, the full bench gives them one more opportunity to appear on Aug. 11.

Aug. 11: the matter is adjourned again till Aug. 21. As per the order of the court, bar councils promised to take action against Sher Zaman Qureshi. Bar Associations also promised to disassociate themselves from him if he does not appear on the next date.

Aug. 21, today: Qureshi does not appear again. He never traveled to Lahore from Multan. As per reports, the LHC has now directed that he be arrested. He is reported to have fled on a motorbike after hearing news of the LHC’s order. Instead, a mob of about 100 lawyers attack the LHC, break down the gate leading to the chief justice’s chamber and also throw stones at police personnel. The police eventually disperse the bawling and brawling mob by using water cannons. That’s where the matter stands.

Well, actually, no. The Supreme Court Bar Association has also got involved by issuing a press release that refers to the hooliganism in Multan as “petty events,” skipped any reference to events in Lahore and called CJ Mansoor Ali Shah’s actions disgraceful.

In response to that, 85 Supreme Court advocates and retired judges have written a letter to the SCBA, asking it to speak out against the delinquent vandalism of lawyers from Multan and uphold the rule of law. The letter has been signed by eminent lawyers like Raza Kazim, Abid Minto, Anwar Kamal, Ahmad Waheed Khan et al.

Interestingly, while the Asma Jahangir group of lawyers has condemned the disgraceful conduct by some lawyers, Hamid Khan’s group has chosen to remain quiet.

Since the lawyers’ movement of 2007, the public has witnessed a sense of entitlement among sections of the bar, which is most unfortunate. Much of bar politics, like most politics where the stakes are low, has been insalubrious for establishing rule of law. But 2007 was a watershed. Since then the frequency of lawyers’ violent misconduct has steadily increased. During one of the now-routine Pakistan Tehreek-e Insaf protests in Lahore, cameras captured an unseemly lawyer slap a father who was taking his two school kids back home. The turd in black coat did this for absolutely no reason. Later, the same turd has been seen in photographs standing next to PTI’s chairman Imran Khan.

What’s different and refreshing this time round is for some eminent, educated, decent members of the bar to say: enough. Not in my name. These lawyers, many of them young, are the ones who earn their living through the actual practice of law and stay away from seedy bar politics. They cannot meet the hooligans in a clash of fisticuffs but it is refreshing to see a movement from within the bar that wants to put an end to what can only be described as pure badmaashi by some lawyers.

The Punjab government would be well-advised to ensure that the law is upheld and if that means treating the posteriors of some hooligans in a spicy, traditional way, so be it. No one will shed any tears for these vandals.

Could not agree with you more. They need to have their posteriors whipped till they cry out and behave themselves. Juvenile behaviour calls for juvenile punishment. They are letting down the entire fraternity and I say this as an ex-Judge of the LHC and as an Advocate of the Supreme Court.