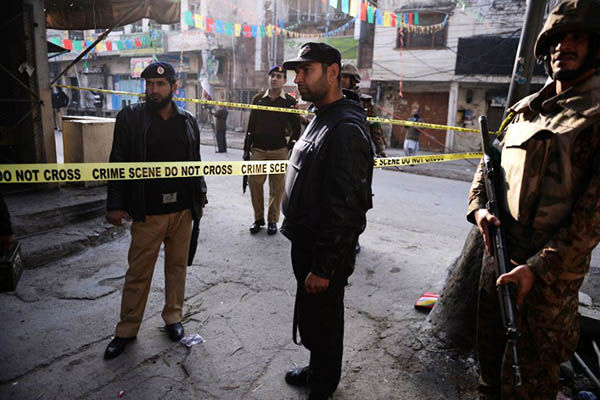 At least 28 others injured in attack claimed by the TTP as retaliation for the military operation against the Lal Masjid in 2007.

A Taliban suicide bomber killed 13 people, including a young student, and injured 28 others after he detonated himself near Rawalpindi’s R. A. Bazaar early on Monday.

“Apparently it looks like a suicide blast,” said district coordination officer Sajid Zafar Dall. “At least nine people have been killed, including five security officials, and 18 others have been injured,” he told journalists shortly after the blast occurred at 7:40 a.m. “The attack occurred when children were going to school. Our initial assessment is that the bomber was possibly on a bicycle and he then approached the target on foot,” Dall said.

The Pakistani Taliban claimed responsibility for the blast. “It was carried out by a Tehreek-e-Taliban Pakistan suicide bomber,” said TTP spokesman Shahidullah Shahid. “We are claiming it with pride,” he said, adding it was retaliation for the military operation against the Lal Masjid in 2007. “We will continue our struggle against the secular system,” he added.

This is the second blast in two days perpetrated by the TTP. On Sunday, a TTP attacker killed 26 soldiers and wounded at least 25 others after he targeted a military convoy in Bannu. The site of Monday’s blast is barely 50 meters from Pakistan’s General Headquarters (GHQ) and is also close to the Armed Forces Institute of Cardiology (AFIC) where former president Pervez Musharraf is currently being treated for heart troubles.

Analysts said the Taliban’s ability to carry out two such high-profile attacks in quick succession raised fresh questions about Pakistan’s strategy for dealing with the homegrown militant threat. The government of Prime Minister Nawaz Sharif has said it wants talks with the Taliban and received the backing of all major political parties for dialogue in September. But so far little progress has been seen and terror attacks rose 20 percent in 2013, according to the independent Pakistan Institute for Peace Studies.

Retired brigadier Shaukat Qadir, a security analyst, said the militants were taking advantage of the government’s lack of policy direction. “You can keep talking about talks but this is what will happen to your talks. The Taliban have stated it quite loud and clear,” he said. The fact the TTP had struck in Rawalpindi, the very heart of Pakistan’s military establishment, carried significant symbolic value, he added.

In claiming the Bannu attack on Sunday, the TTP threatened to carry out more strikes, saying they wanted revenge for the deaths of Hakimullah Mehsud and deputy Waliur Rehman—both killed in U.S. drone attacks. But Shahid also said the group was “ready for meaningful negotiations” if the government halted U.S. drone strikes and withdrew troops from the tribal areas along the Afghan border where Taliban and Al Qaeda-linked militants have hideouts.

Talat Masood, a security analyst and retired general, dismissed the renewed talks offer as a “red herring” meant to stop the government from approving retaliatory military operations. “They are not genuine about talks because their demands are such that they cannot be met,” he said. “It’s very possible the civilians may catch the bait. The government will think ‘The Taliban are willing to talk, so why shouldn’t we talk?’”

Idiotic government policy of appeasement being backed by none other than that “Coward” Khan! The TTP only understand the language of force. Its the UAV attacks (drones) that have them sorted out and kept them on their toes, otherwise they would be all over FATA and KP by now operating in the open like they were in Swat. Our PML leadership lacks vision and the PTI has nothing to offer but to grovel in front of the TTP.

The TTP needs to be punished militarily. Yes we will take more casualties in the process but its better to die while taking these folks on instead of waiting for them to send suicide bombers to blow us up. If the State is to have talks with militants, it needs to be from a position of strength, not begging and groveling that we have become accustomed to on the part of that glutton Nawaz Sharif, his interior minister and the Coward Khan!

This war is being waged on us by militants focused on destroying Pakistan. It has very little to the war next door. Had this anything to do with the war next door, then things would have been calming down here as the Americans wind down in Afghanistan. Having Imran Khan as a national leader is hurting the resolve of the nation to unite like nothing. He is the proverbial Trojan horse in Pakistan.