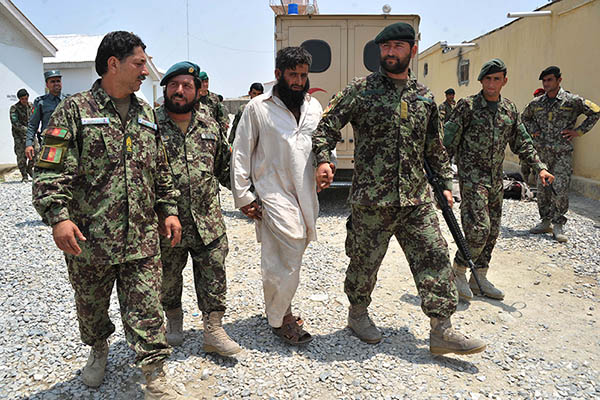 The Taliban have temporarily closed their office in Qatar, where it was hoped peace talks would begin with the U.S. and Afghanistan, an insurgent official said on Tuesday, blaming “broken promises.”

The office opened on June 18 as the first move toward a possible peace deal after 12 years of fighting, but it enraged Afghan President Hamid Karzai by styling itself as an unofficial embassy for a government-in-exile.

Karzai broke off bilateral security talks with the Americans and threatened to boycott any peace process altogether, as international pressure grows to end the Islamist insurgency before 100,000 U.S.-led troops leave next year.

“We have temporarily closed the Qatar office due to broken promises,” a Pakistan-based Taliban official, who declined to be named, said by telephone. “We are not happy with the Americans, the Kabul government and all parties who have not been honest with us,” he said, giving no further details.

The U.S. State Department said that the closure of the office should not disrupt what it called a “challenging process.”

“We believe that misunderstandings that arose in the context of the opening [of the office] should not stand in the way of moving forward on reconciliation if the Taliban wishes to do so,” State Department spokeswoman Jen Psaki told reporters. “We’ll continue to support and reiterate our call for that process to move forward.”

The latest setback came as Afghan officials said a Taliban-planted bomb in the western province of Herat killed 17 civilians, and an Afghan soldier shot dead a Slovakian soldier at Kandahar airfield.

The mounting obstacles to any future peace negotiations follow The New York Times reporting that the U.S. was seriously considering speeding up the withdrawal of its forces because of frustration with President Karzai.

U.S. President Barack Obama is committed to ending the U.S. military involvement in Afghanistan by the end of 2014, though his administration has been negotiating with Kabul about leaving behind a “residual force.”

The U.S. relationship with Karzai, while never good and often volatile, deteriorated again last month in the dispute over the Taliban’s office in Qatar. No decision has been made on the pace of the U.S. pullout or how many U.S. troops to leave behind to fight Al Qaeda militants, but negotiating stances were hardening, the Times quoted officials as saying.

“There has always been a Zero Option, but it was not seen as the main option,” said one senior Western official in Kabul. “It is now becoming one of them.”

Pentagon spokesman George Little said that Obama “is still reviewing options from his national security team and has not made a decision yet about the size of the possible U.S. presence after 2014.”

The Slovakian government confirmed that one Slovak soldier was killed and six were injured on Tuesday when an Afghan soldier opened fire in the latest “insider attack” to shake the NATO coalition. “An Afghan soldier guarding a civilian airport in Kandahar opened fire from a watchtower against Slovak troops,” Defense Minister Martin Glvac told journalists in Bratislava.

Scores of foreign soldiers have been killed in insider attacks in Afghanistan, breeding fierce mistrust and threatening to derail the training of local forces to take over security duties ahead of NATO’s withdrawal. The threat has become so serious that foreign soldiers working with Afghan forces are regularly watched over by so-called “guardian angel” troops to provide protection from their supposed allies.

The roadside bomb in Herat killed 12 women, four children and one man travelling in a three-wheel minivan, officials said, adding that at least seven other passengers were wounded.

In recent weeks, insurgents have accelerated their campaign of suicide attacks and roadside bombs against Afghan officials and Afghan and U.S.-led NATO troops. The ministry of interior said that 300 police officers were killed in the last month, as Afghan security forces increasingly take on frontline duties fighting the Taliban.